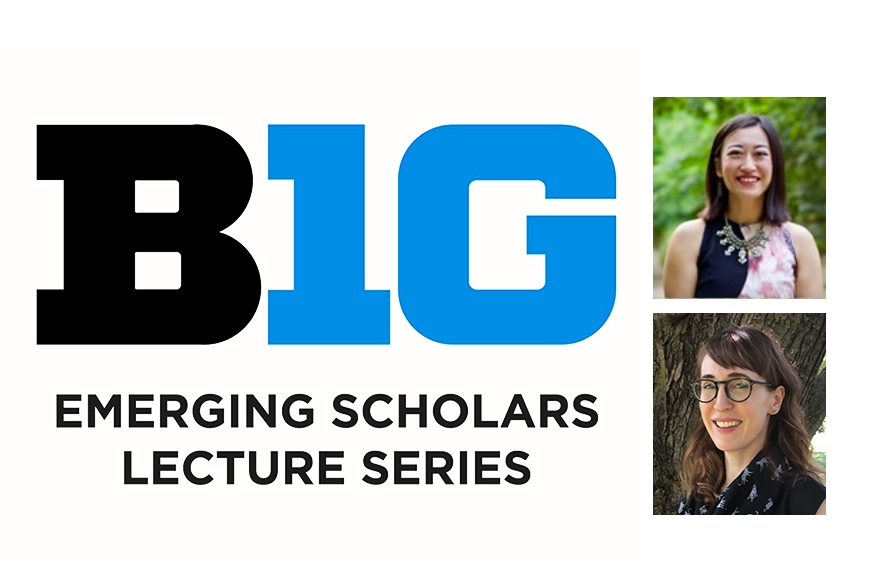 The Big Ten Emerging Scholars lecture series was created in 2018 during the inaugural annual meeting of the Big Ten English Department Chairs. The purpose of this series is to:

This series was also initiated in order to strengthen a sense of community among the participating English Departments in the Big Ten. The Big Ten Academic Alliance is the nation's preeminent model for effective collaboration among research universities and, other than the Ivy League, the country's most prestigious higher education consortium of top-tier research institutions.

Being selected as one of the annual Big Ten Emerging Scholars is, thus, a significant honor (the selection process is competitive). You can learn more about the series on the Big Ten Departments of English website.

Our department's Big Ten Emerging Scholar is 2019 PhD graduate Yuan Ding. A published translator, Ding taught at Macalester College in 2018, and is currently working on a book project based on her dissertation, “Capitalizing Race: Diasporic Narratives and Global Asia.” The project proposes to read the rhetorical production of “ethnicity” as an economic process, as human mobility is dictated by and understood to signify financial liquidity. Focusing on the rhetorical link between “mobility” and “flexibility” in contemporary global Asian writing as tropes for both capital and people, “Capitalizing Race" highlights the ways in which Asian diasporic agency is shaped by and in turn manipulates the circulation of both cultural and monetary capital. Ding gave her Big Ten Emerging Scholars talk, “The City and Its Refugees: The Geopolitics of Non-Places in Mohsin Hamid’s How to Get Filthy Rich in Rising Asia and Exit West” on September 6 at the University of Iowa.

As a department, we will host Big Ten Emerging Scholar Anne Nagel on Friday, October 11. Nagel is a PhD candidate studying nineteenth-century British literature and critical theory at the University of Nebraska-Lincoln. Her dissertation, "Beyond the Looking-Glass," explores the subversive potential of affective intensity in the depictions of dreams and sleep in British novels and poetry of the long nineteenth century. Nagel has received the Robert L. Hough Lecturer Teaching Award, works on the Central Online Victorian Educator, and regularly contributes to the UNL Watershed Critical Theory Blog. She holds an MA in English literature and a certificate in Interdisciplinary 19th Century Studies from UNL.

Talk by Big Ten Emerging Scholar Anne Nagel: 4 pm, October 11, Lind Hall 207A
Anne Nagel will examine a series of bedroom scenes in Charles Dickens’s Dombey and Son through a double lens, focused both on the material environment of the private bedroom and on the virtual undercurrents of affect and potential. One century earlier, it would have been normal for family members of different ages and genders to have shared a bedroom with one another and even with servants or visitors. But for the rising middle class of nineteenth-century England, the private bedroom had become a hallmark of affluence, individuality, and propriety. As a construct of the latter, it was also imbricated in the Victorian mythos of separate spheres, which gendered the private, domestic sphere as female and the public sphere of commerce as male. The conceptual framework reinforcing the constructed limits of the bedroom comes to the fore in Dombey and Son when Florence, an affectionate daughter spurned by her status-obsessed father, sneaks first into his bedroom and then into her stepmother’s. Her uninhibited passage threatens the individuation of rooms as well as familial gender roles. Ultimately, the relationship between these bedrooms and their inhabitants’ reveries shifts the narrative into the realm of the virtual, slowing the progressive movement of the bildungsroman for an exploration of potential. Combining pre-Freudian theories of sleep and dreams with the affect theory of Gilles Deleuze, Nagel reveals how these bedroom scenes of mesmeric reverie transform into sites of the virtual, uniquely adept at conjuring a multiplicity of potentials and affects.
Talk by Big Ten Emerging Scholar Yuan Ding: September 6, University of Iowa
In this talk, Ding will read two novels by the Pakistani-born writer Mohsin Hamid--How to Get Filthy Rich in Rising Asia (2013) and Exit West (2017)--as postmodern fables of the contemporary migratory experience of the Global South. Her reading is informed by anthropologist Marc Augé’s concept of the “non-place,” which describes a space that is not relational, historical, nor concerned with identity, such as taxis, hotels, airports, or refugee camps. The spread of neoliberal economy has driven the proliferation of non-places, the ubiquity of which has fundamentally changed human’s experience of places, from a relation grounded in the familiarity of the local to one superseded by the uncanny recognition-without-identification that typify our modern experience of globality. In this essay, Ding reads the “non-place” as a trope to rethink both current geopolitical theories of migration and the nation-state, as well as to reexamine the locality-based identity politics prominent within Asian American Studies. Set in the “non-place” of anonymous metropolises penetrated by neoliberal technologies, such as advertisements, social media and electronic surveillance, Hamid’s novels imagine new opportunities for place-making under nearly inhuman conditions.
English
Category
Alumni
Engagement
Arts
Humanities
Research and Creative Work
Share on: