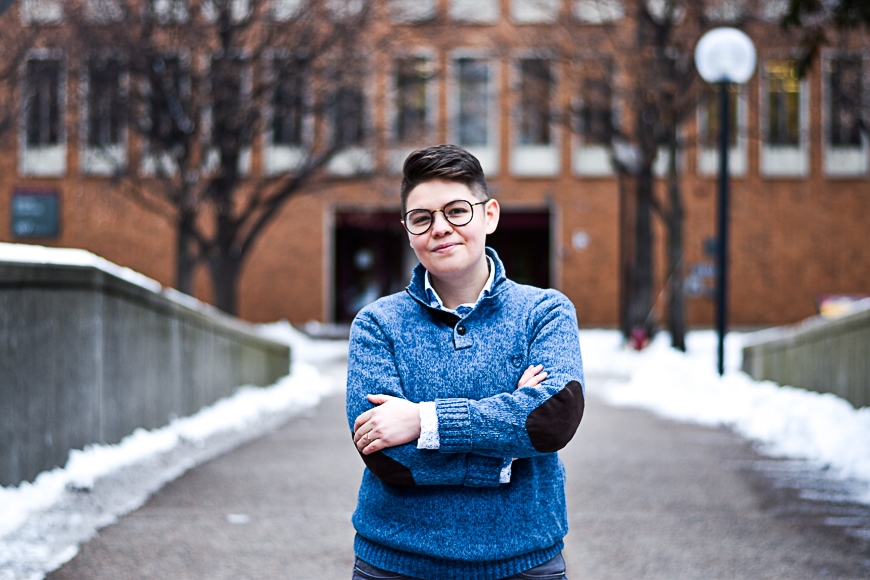 Queer history, and specifically lesbian history, is often forgotten in the narrative of US history. “There's a complex story to tell here—one that adds to our understanding of terms like intersectionality. I hope to add to our histories of organizing for justice by illuminating this story,” says Elena Gambino, a political science doctoral candidate at the University of Minnesota. Gambino’s work shows that by including the history of lesbian feminism in the story of America, we can see the trailblazing forces that have changed how we understand activism and politics.

Research Outside the Box

As Gambino applied to graduate school, she was looking for programs that would not limit her creative approach to politics. Inspired by feminist writers of color like Audre Lorde, Gloria Anzaldúa, and Cherríe Moraga and their belief that social justice and lesbian feminism go hand-in-hand, she wanted an education that would foster impactful, hopeful conversations and encourage her to think big and not always look for the “correct” answer. Gambino found this space at the U.

“The Department of Political Science here has a long history of thinking outside the box. Many of our faculty members and graduate students understand that politics often unfolds in unexpected ways that exceed existing theories or frameworks, and that sometimes we have to get creative if we want to really understand what's happening in the world around us,” Gambino says.

Gambino is grateful for her mentors in the Department of Political Science who have been invaluable sources of support throughout her project, always encouraging her to address big questions. Her research relies on the extensive archives of the women’s and LGBTQ movements, and the department has given her the travel support needed to conduct her research at those sites.

“I was drawn to this program because I was excited about doing that kind of work, and am most excited when I'm around people who challenge my preconceived notions about the world in this way,” she explains.

Gambino believes that oppression of queer people, people of color, women, and the poor is alive and well today, and that it is important to understand where and how these oppressions function in order to see how our society has created barriers for people. “We have these rich histories of people developing ways...to build better relationships with one another, to create spaces where justice seems possible. I'm drawn to these histories, then, because they give us hope,” she says.

Gambino’s work looks at how activists in the past, like lesbian groups in the 1970s and 80s, thought about and sought to take responsibility for inequalities within their groups. Looking at past responses to racism and other internal inequalities can show us how to take responsibility for issues of inequality today. “These histories teach us a lot about how to come to terms with the reality of injustice, but also about how to demand and build a more just future,” she says.

Her dissertation examines how feminist and queer theorists have negotiated power relationships between and among themselves over time, and it has received an Andrew W. Mellon Foundation fellowship through a Sawyer Seminar entitled "The Politics of Land: Colony, Property, Ecology" and a Doctoral Dissertation Fellowship from the University of Minnesota Graduate School.

Gambino chose to research lesbian organizing in particular because it has been overlooked in history. She traveled to archival sites around the US—such as Brown University's Feminist Theory Archives, the Lesbian Herstory Archives in New York, and archives of the lesbian magazine Sinister Wisdom—and employed many methodological tools, including archival research and analysis of literary works.

“While many people today think that these groups ignored racial inequalities altogether or were naive about the challenges racial difference poses to political organizing, by diving more deeply into their political and organizational writing I find that these groups were, in fact, highly attuned to how issues of race and racism posed challenges to their goals,” Gambino says.

Gambino found that many of the groups she studied conceptualized racism as a problem of accountability, rather than exclusion. These groups believed that it was not enough to include marginalized voices—they saw that they needed to hear marginalized voices. By reframing it as accountability, activist groups must take responsibility for listening to women of color and queer women and taking steps to build a more equal movement.

Gambino will defend her dissertation "The Lesbian Body Politic: Power, Method, and Accountability in Feminist and Queer Theory" in May.