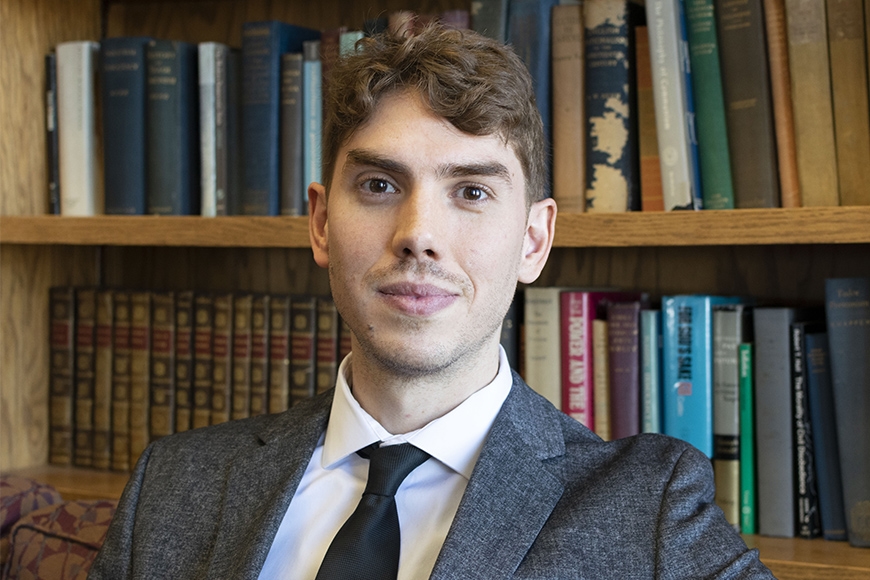 The Council of Graduate Students at the University of Minnesota has honored PhD candidate Ivan Jucá with the Aaron and Anna Beek Graduate Student Teaching Award. Nominations for this award come directly from undergraduate students. According to the award committee, Ivan’s nomination was “one of the sweetest and most interesting nominations [they] received.”

As a teacher, Ivan has connected with students, developed their skills, and led them to successfully pursue careers and graduate school in the field. His dedication to students was notable both in the courses he taught, political psychology and political economy, and when he was a teaching assistant.

As a teaching assistant in the political science graduate program, Ivan says he was able to “learn different pedagogical strategies and styles” from different professors who “defended and justified their strategies and shared many invaluable tips and insights.” Additionally, Ivan is deeply engaged in research on the congressional system, political parties, and clientelism, or vote buying and patronage, in Brazil.

Ivan was attracted to the University of Minnesota for his graduate studies because Professor David Samuels is one of the leading academic experts in Brazilian politics and because the department has a reputation for respect for different points of view.

One thing was clear from the reviews of Ivan’s students: he makes the classroom a welcoming place. Phillip Kobort, one of Ivan’s students, was “truly impressed” when Ivan increased the number of students who regularly contributed to the class discussion. To the half of the class that mostly kept quiet, Phillip reports, “Ivan said to them all that he had read their midterms, and they were all very smart and should not be hesitant in answering in class. It was such a positive thing, and from that moment, discussion increased greatly.”

Transfer student Aodan Sinclair is the first in his family to go to college, and last semester he took Political Psychology of Mass Behavior with Ivan. “Whether he realized it or not,” Aodan says, “Professor Jucá made the transition from my previous college way less intimidating. By making political psychology more approachable and accessible, Professor Jucá made me feel like I wasn’t in over my head.” Aodan plans on pursuing further study in political psychology in graduate school due in part to Ivan’s teaching and mentorship.

Ben Harrington was also inspired by a course he took with Ivan. Because of his time in Ivan’s Political Economy of Development class, Ben now wants to pursue a career in that field. “Ivan’s class caused me to want to further my involvement in economic development,” Ben writes. “I ended up getting an economic/community development internship with a suburb of Saint Paul. I have now been accepted to the Humphrey School of Public Affairs. Ivan gave feedback on some of my admissions material and was kind enough to write a letter of recommendation.”

Carly Coons described how Ivan’s patience helped her understand the course material. After struggling to understand one of the lectures early in the political psychology course, Carly visited Ivan’s office hours. “Not only did he spend thirty minutes patiently working through the content of the lecture,” Carly says, “he gladly repeated himself, answered my questions, and used a variety of examples to make sure I understood it. Not once did I feel embarrassed or like I was wasting his time.”

Ivan plans to head back to Brazil for three months this year to continue his research on party discipline in the Brazilian Congress and how clientelism may explain legislative behavior.

“In Brazil, several reforms have sought to strengthen party leaders,” Ivan explains. “Such reforms are usually based on the belief that disciplined parties are inherently good.” But what if they are not inherently good? “If some parties are mainly buying votes and engaging in corruption to pay for it,” Ivan continues, “then strengthening parties will likely backfire and increase fragmentation of the party system.” His research could produce important insights for political reforms that seek to improve representation and accountability.

The Department of Political Science truly values exceptional teaching, and Ivan has become a sterling example of pedagogical excellence.