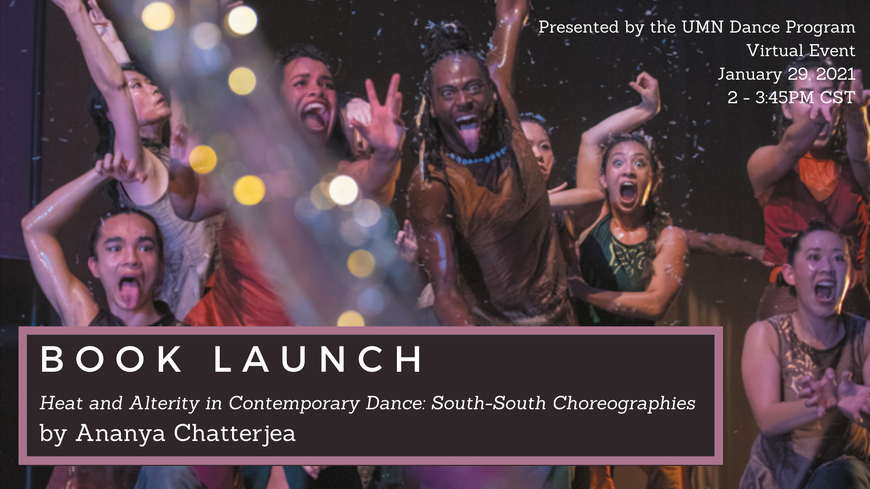 Join the University of Minnesota Dance Program for a virtual BOOK LAUNCH event for Professor Ananya Chatterjea’s Heat and Alterity in Contemporary Dance: South-South Choreographies, published by Palgrave McMillan as part of its New World Choreographies series in November 2020.

The UMN Dance Program celebrates the release of Heat and Alterity in Contemporary Dance: South-South Choreographies (2020, Palgrave McMillan) written by faculty member Ananya Chatterjea, through this transnational online event. Professor Thomas DeFrantz (Dance & African and African-American Studies, Duke University) who has described the book as “Sweeping in scope...Crucial reading; an achievement of the moment and for the ages,” will introduce the project. The panel of speakers, like the book, convenes a powerful global BIPOC community with voices such as Ananya Jahanara Kabir (English, King’s College, London),  Douglas Kearney (English, UMN), and Alessandra Williams (Dance, Rutgers University). The discussion will highlight some of the driving ideas of the book: South-South contemporary choreographies, a “different” global stage for contemporary dance, contemporary dance reimagined as a polycentric, justice-oriented aesthetic-temporal category, among others. The book highlights the work of Germaine Acogny, Sardono Kusumo, Nora Chipaumire,  Rulan Tangen, Lemi Ponifasion, Camille A. Brown, Prumsodun OK, and Alice Sheppard.

We welcome you to use the comment section on the right-hand side of the stream for our concluding discussion with the audience; comments will be moderated during the event and relayed to the speakers. This discussion will center around the question: What paradigm shifts and future dimensions of contemporary dance are inaugurated by such formulations? We look forward to a vibrant discussion with all!

Ananya Jahanara Kabir is Professor of English Literature at King’s College London. Before King’s, she taught at the Universities of Leeds and Cambridge, as well as the University of California at Berkeley. She researches the intersection of the written text with other forms of cultural expression within acts of memorialisation and forgetting. In recent years, issues around the market and cultural heritage join her earlier interests in the relationship of creativity to conflict. Through an ERC Advanced Grant (2013-2018), she led an interdisciplinary investigation into African-heritage social dance and music across language worlds. The author of Paradise, Death and Doomsday in Anglo-Saxon Literature (2002), Territory of Desire: Representing the Valley of Kashmir (2009) and Partition’s Post-Amnesias: 1947, 1971, and Modern South Asia (2013), she is currently writing ‘Alegropolitics: Connecting on the Afromodern Dance Floor.’ Her new research project, Creole Indias, explores transoceanic creolisation through cultural production connecting the Atlantic and Indian Ocean worlds. In May 2020, she co-founded with writer Ari Gautier the cultural platform, le thinnai kreyol, which is currently housed on Facebook. It showcases their vision of a multicultural, plural, and creolised Indic space.

Douglas Kearney has published six books, including the award-winning poetry collection Buck Studies (Fence Books, 2016); libretti, Someone Took They Tongues. (Subito, 2016); and criticism, Mess and Mess and (Noemi Press, 2015). His newest collection of poems, Sho, will be out in 2021 (Wave). A Whiting Writer’s and Foundation for Contemporary Arts Cy Twombly awardee with residencies/fellowships from Cave Canem, The Rauschenberg Foundation, and others, Kearney teaches Creative Writing at the University of Minnesota–Twin Cities.

Dancer-scholar Alessandra Williams is an Assistant Professor of Dance at Rutgers University-New Brunswick. Her research interests include dance and performance, Asian and African diasporas, transnational feminism, and queer of color theory. As an artist in Ananya Dance Theatre, Williams has performed nationally and internationally in 8 of the company’s productions. Alongside Ananya Chatterjea and Hui Wilcox, she has co-edited their forthcoming book Dancing Transnational Feminisms: Artistic Excellence and Social Justice in Ananya Dance Theatre (2021, University of Washington Press). Currently, she has a solo-authored book project on the queer of color choreography of Los Angeles-based artist David Roussève and the REALITY dance company. Williams has also completed an Inclusive Excellence Fellowship (2018-2019) at University of Wisconsin-Whitewater, and as Eugene V. Cota-Robles Fellow, she earned the Culture and Performance Ph.D. at University of California, Los Angeles.