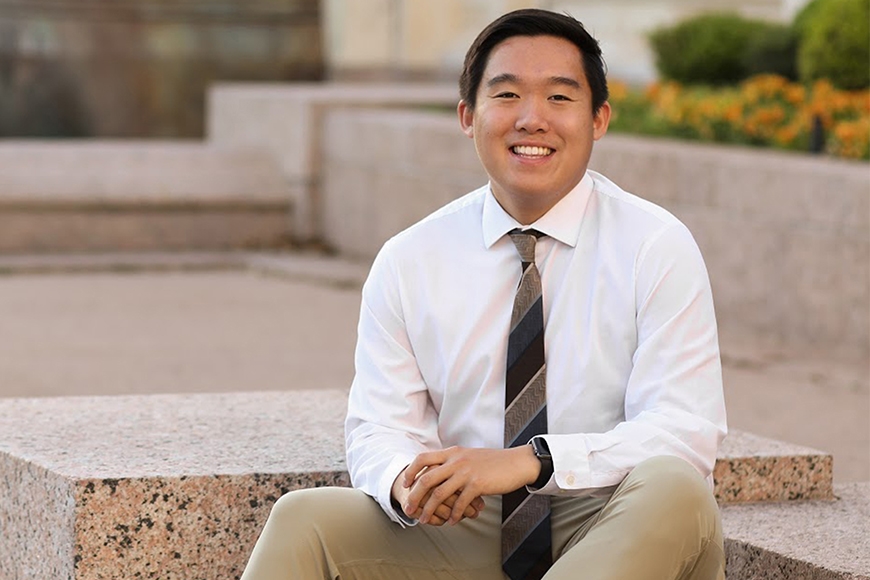 Jonathan Du remembers when he decided what to do with his life. He was in middle school. Barack Obama was running for president. “I liked the idea that a minority could get to such high positions of power and really inspire a country,” says Du, whose parents came from China and raised him in Colorado. He decided to become a lawyer and go into politics.

Du chose the U based on its political science program, its law school, and its support for pre-law undergrads. But freshman year was “kind of a struggle,” he says. His grades were fine, but college had opened his eyes to vocations beyond law school, and an interview to work in a congressman’s office that summer had gone “horribly,” he says.

He was serving on the CLA Student Board during his sophomore year, when CLA Career Services encouraged the board members to apply for the Mulhollem Cravens Leadership Scholarship, which offers career counseling, mentoring, and a reflection course along with financial support for a summer internship. Du got the scholarship and an internship with the Republican National Committee in 2016. “I’d always wanted to work in Washington, DC,” he says, “the fabled place where all the policy gets made, all the backroom deals are made, where the smart people go to play in politics.”

The internship paid $200 every two weeks. “There was no way I could have made it work without that scholarship,” Du says. “It had a monumental impact. It kick-started my career and helped me get where I am today.”

[My scholarship] had a monumental impact. It kick-started my career and helped me get where I am today.

The following summer, with help from a mentor at the RNC, he got an internship at CBS News in New York. And after graduating early, in 2017, he returned to CBS News and Washington, DC, as a news associate on Face the Nation.

Du recently earned his master’s in public affairs from the University of Texas at Austin, and last summer he interned with Facebook on its Civic Integrity Team, helping audit the internal tools that flag hate speech, disinformation, and misinformation.

Now he’s beginning a full-time job at Facebook, looking at ways to improve content, navigation, and user privacy across its suite of apps—“presenting complex technology in manageable ways,” he explains. At a time when work is increasingly specialized, he says, Facebook likes “bigger thinkers” who can see across disciplines and “wrap it all together” to improve processes.

Du credits CLA with helping him develop as a problem solver. Confronted with situations that aren’t black and white, he says of liberal arts grads, “we can rely on our ability to critically think and build coalitions and bring people together to solve these problems.… I think we need people who can think outside the box. Nobody does it better than someone with a liberal arts degree.”

Read about other alumni for whom the Career Readiness Initiative ensured the liberal arts advantage and turned learning into lifelong success.