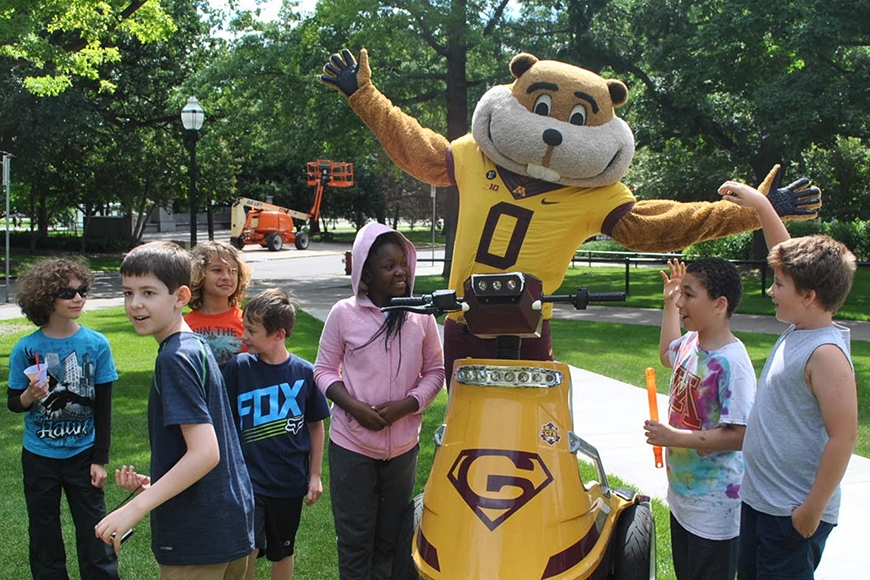 Joshua Hebeisen first attended the Sioris Family University of Minnesota Kids Who Stutter Camp as a third-grader over a decade ago. He quickly felt right at home.

“As a kid who stutters, it means so much on the first day of camp to sit around a table with a bunch of other kids your age who also stutter. Being able to see, ‘Okay, I’m not the only one,’” says Hebeisen, now a 20-year-old UMN sophomore. The experience was so affirming that he went back every year until aging out of the camp after eighth grade.

Hebeisen was invited back to be the camp’s first junior counselor in 2016; this summer was his fifth year in that role (COVID-19 caused its cancellation in 2020). He finds the work gratifying. “I’m pretty open about my stuttering—I think a lot of kids aren’t used to being so open about it. Once you start talking to others who are in the same boat, it’s really freeing.”

Founded in 2009, the camp is the brainchild of Erin Bodner—then a UMN grad student in speech-language pathology, now a clinical supervisor in speech-language pathology and camp director. Just as Bodner and her clinical supervisor, Linda Hinderscheit, were mulling over the idea of a day camp, Professor Leo Sioris of the Department of Experimental and Clinical Pharmacology and his wife Cheryl were approaching the Department of Speech-Language-Hearing Sciences expressing interest in helping children who stutter. A partnership was born.

The generosity, commitment, and genuine care shown by the Sioris family to kids who stutter are so greatly appreciated.

Camp is one week, open to students from third through eighth grade. Usually, 10–12 kids attend—many as return campers. Fees are minimal; no student has ever been turned away. “The generosity, commitment, and genuine care shown by the Sioris family to kids who stutter are so greatly appreciated,” says Bodner, also a person who stutters.

Besides Bodner and Hinderscheit, there are three additional co-leaders—all adults who stutter—and a few graduate student clinicians. It’s evolved based on students’ feedback. “We started incorporating therapy activities around dealing with bullying and teasing,” Bodner says. “A lot of camp is focused on the social, emotional, and attitudinal issues related to being a person who stutters.”

Art activities are big; campers get to draw their stutter. “That’s powerful, using creativity and other means of expressing themselves,” Bodner says. Campers enjoy games that often begin with vulnerability and build camaraderie and trust. “We have one that we call the Silly Stutter Game. When you play games with your stutter and make it something not so scary, and you’re in control of it, it can be really liberating.”

Campers take outings around campus, to places like the Weisman Art Museum and the Raptor Center. A newer addition is a panel discussion with teens who stutter. Panelists are former campers, like 19-year-old Justin Haag, who enjoys answering questions from kids and helping build their confidence. “It’s fun to come back.… I get to see the counselors again, and see how the community is still growing.”

Among Haag’s favorite memories is the annual end-of-camp outing to a campus fast-food restaurant. Campers—many for the first time—place their own orders. “It seems like a small, insignificant thing, but as a kid, it’s really cool to go there and order like an adult. It’s fulfilling; you use some of the skills you learned at camp. It makes you feel like you really made progress.”

Ultimately, camp is about acceptance, Bodner says. “And really opening up the campers’ idea of what being a good communicator is.” The message is “it’s okay to stutter, and what you have to say is important, regardless of fluency.”

Hebeisen agrees, adding that the election of a US president who stutters underscores that. “Here’s a guy in literally the most powerful and influential position in the whole world, and he’s a person who stutters. It shows that you can do whatever you want: stuttering doesn’t define you.”

This article is part of a larger feature called "How to Move Mountains." Read about other urgent and relevant work being done by CLA scholars.