"Armenian Genocide and Provincial Histories: Dispossession and Migration in the late-Ottoman Empire" 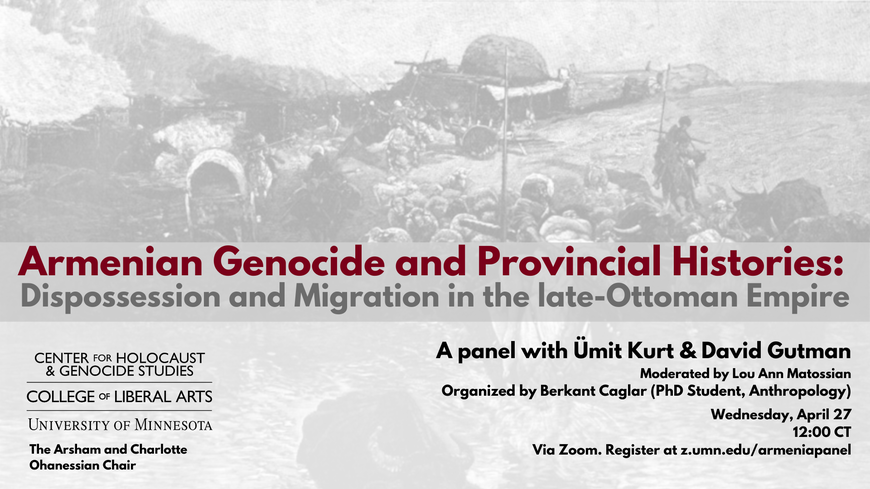 Event Date & Time
Wed, Apr 27, 2022 | 12 - 1:30 pm
Event Registration
While the Armenian genocide is oftentimes associated with the events of 1915 and its aftermath, the pre-years of genocide and shifting local practices have been less discussed. Although scholars explored 1894-1896 Hamidian Massacres and the Adana Massacre of 1909 to exemplify the empire-wide hostile policies toward Armenians, we little know about how macro-policies were differently interpreted at the local level and what kind of (agentive) responses it produced. In this panel, we bring two groundbreaking scholars together to understand the interplay between persistent violence and the wide variety of responses the same violence brought. Revisiting the provincial histories of the Ottoman state through local and regional perspectives, David Gutman will highlight the Armenian migration to North America and Umit Kurt will discuss processes of dispossession and economics of genocide.
The Economics of Genocide in Ottoman Aintab: The Active Participation of Local Elites in Plunder
Ümit Kurt
Ümit Kurt received his PhD from Clark University, History Department in 2016. He is the author, with Taner Akçam, of The Spirit of the Laws: The Plunder of Wealth in the Armenian Genocide (New York and Oxford: Berghahn Books, 2015). He was a postdoctoral fellow in the Center for Middle Eastern Studies at Harvard University in 2016-2017 and Visiting Assistant Professor in the Armenian Studies Program at California State University, Fresno in 2017-2018. He is currently a Polonsky Fellow at the Van Leer Jerusalem Institute and teaching in the Dept. of Islamic and Middle Eastern Studies at Hebrew University of Jerusalem. His recent book, The Armenians of Aintab: The Economics of Genocide in an Ottoman Province, has been published in 2021 by Harvard University Press.
The Politics of Migration and the Socio-Political Climate of Armenian Life in the Pre-Genocide Ottoman East
David Gutman

David Gutman is Associate Professor of History at Manhattanville College in Purchase, NY. His book, The Politics of Armenian Migration to North America: Sojourners, Smugglers, and Dubious Citizens (Edinburgh, 2019), examines the overseas migration of Ottoman Armenians in the late nineteenth and early twentieth centuries, and the Ottoman state’s response to this migration. The book addresses a wide range of themes including clandestine mobility, migrant smuggling, border control, and contested citizenship. He has also published on topics ranging from mobility control and intelligence gathering to the historiography of the Armenian genocide. He is currently in the early stages of a comparative study of urban violence against non-dominant populations in the early twentieth century. He also serves as managing editor of the Journal of the Ottoman and Turkish Studies Association.