"It Can Happen Here: White Power and the Rising Threat of Genocide in the US" 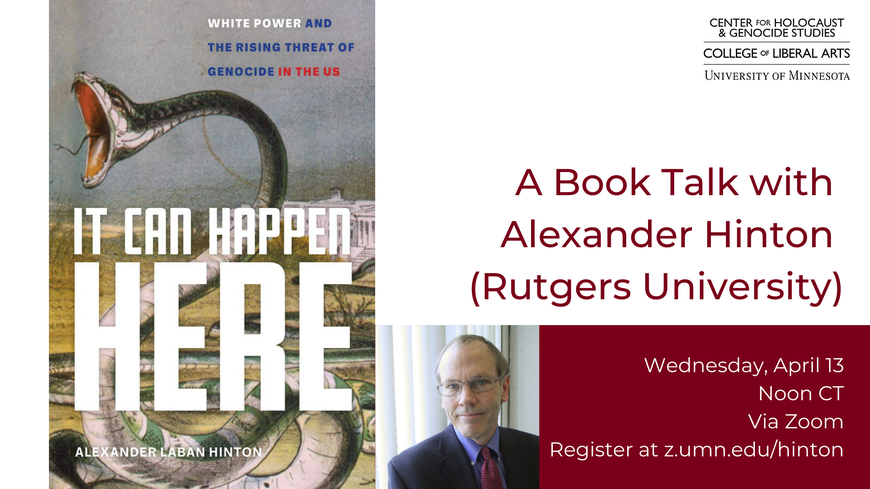 Event Date & Time
Wed, Apr 13, 2022 | 12 - 1 pm
Event Registration
If many people were shocked by Donald Trump’s 2016 election, many more were stunned when, months later, white supremacists took to the streets of Charlottesville, Virginia, chanting “Blood and Soil” and “Jews will not replace us!” Like Trump, the Charlottesville marchers were dismissed as aberrations―crazed extremists who did not represent the real US. It Can Happen Here demonstrates that, rather than being exceptional, such white power extremism and the violent atrocities linked to it are a part of American history. And, alarmingly, they remain a very real threat to the US today.

Alexander Hinton explains how murky politics, structural racism, the promotion of American exceptionalism, and a belief that the US has have achieved a color-blind society have diverted attention from the deep roots of white supremacist violence in the US’s brutal past. Drawing on his years of research and teaching on mass violence, Hinton details the warning signs of impending genocide and atrocity crimes, the tools used by ideologues to fan the flames of hate, and the shocking ways in which “us” versus “them” violence is supported by inherently racist institutions and policies.

Alex Hinton is Distinguished Professor of Anthropology, Founder and Director of the Center for the Study of Genocide and Human Rights, and UNESCO Chair on Genocide Prevention at Rutgers University, and the author over a dozen books including the award-winning Why Did They Kill? Cambodia in the Shadow of Genocide.
Share on: