"Remembering Through Music: The Srebrenica Genocide in Bosnian izvorna Songs" 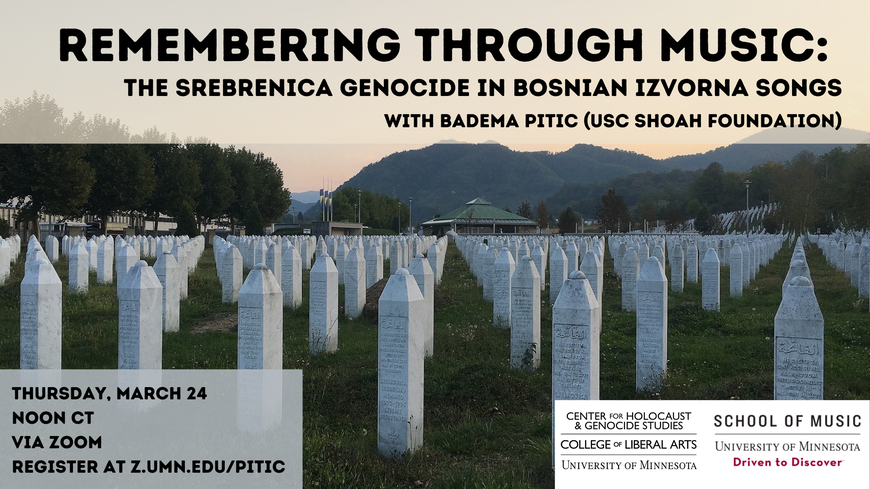 Event Date & Time
Thu, Mar 24, 2022 | 12 - 1 pm
Event Registration
For over a decade, a large part of a transnational community of Srebrenica genocide survivors has been engaged in a local musical practice to narrate, or testify about, their experiences of the genocide. This repertoire, which consists of neotraditional narrative songs called izvorna, is composed, performed, and consumed by genocide survivors living in Bosnia-Herzegovina and abroad. Emerging from a wartime practice of commemorating fallen Bosniak soldiers from the Srebrenica area during the 1992-1995 war in Bosnia-Herzegovina, first commemorative izvorna songs about the Srebrenica genocide were created as early as 2003. Today, these songs represent the largest part of a commemorative musical repertoire dedicated to this genocide. A grassroots form of remembrance and witnessing, izvorna songs are personal stories genocide survivors tell about themselves, their traumatic experience and it's aftermath. In this lecture, Dr. Pitic will analyze the content and significance of this repertoire and the active role genocide survivors have in its creation. By doing so, she addresses the following questions: How do commemorative izvorna songs fit into a larger context of the Srebrenica genocide commemoration? How does this form of witnessing and remembrance compare to more established forms of witnessing, primarily to the survivor testimony?
Badema Pitic is a Head of Research Services at the USC Shoah Foundation - Institute for Visual History and Education. She earned her Ph.D. in ethnomusicology in 2017 from the University of California, Los Angeles. Her research focuses on the intersections of music, memory, and politics in the aftermath of war and genocide in Bosnia-Herzegovina. Her research interests also include oral history and testimony, transitional justice, and perpetrators’ music.
Presented by the Center for Holocaust & Genocide Studies and School of Music.
Share on: