“We Charge Genocide”: International Law and Anti-Black Violence in America 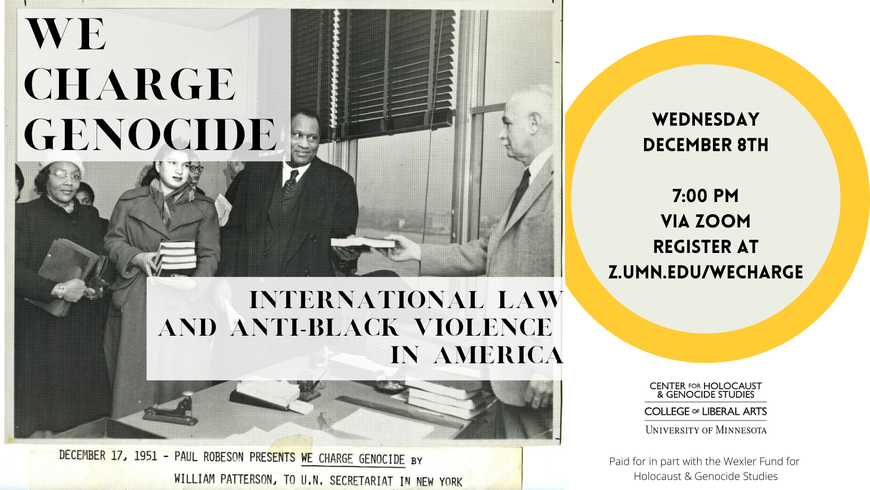 In 1951, the UN Genocide Convention went into force and established genocide as a crime according to international law. In response to this critical development, the Civil Rights Congress, an African-American led organization, submitted a petition to the UN General Assembly under the title "We Charge Genocide." In this petition, the CRC listed numerous violent crimes perpetrated against Black Americans, arguing that these amounted to genocide, as defined by the recently ratified convention.

This panel will address the history of "We Charge Genocide," shedding light on the turn to international law as a means for challenging systemic racism, and it will reflect on the legacies of such efforts in the continued struggle against anti-Blackness in our present moment.

H. Timothy Lovelace, Jr., is a professor of law at Duke University where he teaches courses in American legal history, constitutional law, and race and the law. Lovelace’s scholarship examines how the civil rights movement in the United States helped to shape international human rights law. He has published articles in journals including the Law and History Review, American Journal of Legal History, and the Journal of American History.  His forthcoming book, The World is on Our Side: The U.S. and the U.N. Race Convention, examines how U.S. civil rights politics shaped the development of the International Convention on the Elimination of All Forms of Racial Discrimination.

Douglas Irvin-Erickson: "’We Charge Genocide:’ Raphael Lemkin, William Patterson, and the Politics of Race and 'Genocide' in the US”

Douglas Irvin-Erickson is a political theorist and diplomatic historian, specializing in international criminal law and justice. He has worked in the field of genocide studies and mass atrocity prevention in across Southeast Asia and the East African Community. His first book is titled Raphaël Lemkin and the Concept of Genocide (University of Pennsylvania Press, 2017), and he is currently finishing two book projects simultaneously. The first, "Dying in the Age of Thoughtlessness: The Genocide Prevention and Peacebuilding Industrial Complex," is a critical examination of how the global genocide prevention and peacebuilding regimes take on their own rational and exist to justify their own existence. The second book he is finishing is an intellectual biography of Martin Luther King Jr. Irvin-Erickson is Assistant Professor of Conflict Analysis and Resolution at the Jimmy and Rosalynn Carter School at George Mason University. He is a Senior Fellow with the Alliance for Peacebuilding, a Board Member of the Institute for the Study of Genocide, and a member of the editorial board of Genocide Studies and Prevention: An International Journal. He holds a Ph.D. in Global Affairs and an M.A. in English Literature from Rutgers University, in Newark, NJ, USA.

Angela Rose Myers: "'The UN? What Can They Do for Black America?': International Law and Racial Justice in America"

Angela Rose Myers is the President of the Minneapolis NAACP and pursuing her Master’s degree in Human Rights at the University of Minnesota. After graduating from Barnard College of Columbia University in New York City, Angela Rose, a Twin Cities Native, returned to Minneapolis looking to make a change in her community. After being connected with the Minneapolis NAACP, she quickly rose to the position of 2nd Vice-President at the age of 23 then was elected President of the Minneapolis NAACP in November 2020 at 25, making her one of the youngest NAACP Adult Branch Presidents in the Nation. She has worked with and built relationships with many local community groups on issues of Civic Engagement and ending police brutality like Black Votes Matter Minnesota, ACLU Minnesota, Minnesota Freedom Fund, Families Supporting Families Against Police Violence, and national groups like the National Organization For Women, George Floyd Memorial Foundation, Emmett Till Legacy Foundation, and National Action Network. She has traveled around the world engaging scholars on social justice issues and public policy, most notably helping coordinate the 5th World Conference on Racial and Ethnic Economic Inequalities in Vitoria, Brazil. As a social justice advocate and researcher, Angela’s goals are to create bridges between grassroots organizing, public policy and critical race theory scholarship.

Presented by the Center for Holocaust & Genocide Studies