Jelena Subotić, Professor in the Department of Political Science at Georgia State University 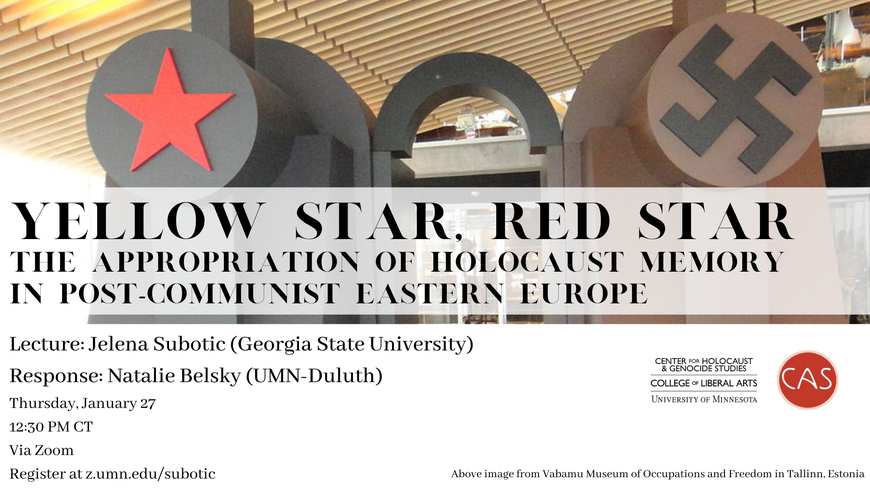 This short talk explores the ways in which the visual and symbolic repertoire of cosmopolitan Holocaust memory has become appropriated to represent other types of historical crimes. Focusing on post-communist Eastern Europe, I demonstrate how the familiar narratives and images of the Holocaust have been repurposed for two main goals: first, to normatively elevate the suffering of non-Jewish national majorities and equate it with the Holocaust, and, second, to reposition the crimes of communism as the dominant criminal legacy of the 20th century on par with, and sometimes overtaking, the legacy of the Holocaust. I illustrate these arguments with brief examples of revisionist museum and commemorative practices in Poland, Hungary, Lithuania, and Serbia.

Followed by a response from Natalie Belsky, Assistant Professor of History, UM - Duluth.

Jelena Subotić is Professor in the Department of Political Science at Georgia State University. Her most recent book, Yellow Star, Red Star: Holocaust Remembrance after Communism (Cornell University Press, 2019, Serbian translation 2021) has won the 2020 Joseph Rothschild Prize in Nationalism and Ethnic Studies, the 2020 American Political Science Association European Politics and Society Book Prize, the 2020 Robert L. Jervis and Paul W. Schroeder Prize for the Best Book in International History and Politics (American Political Science Association) and Honorable mention, 2020 Barbara Heldt Prize for Best Book by a woman in any area of Slavic/East European/Eurasian Studies. Her first book, Hijacked Justice: Dealing with the Past in the Balkans (Cornell University Press, 2009) has been translated and published in Serbia in 2010. She also the author of more than 30 scholarly articles on, among other topics, memory politics, transitional justice, and politics of the Balkans.

Natalie Belsky is Assistant Professor of History at the University of Minnesota Duluth. Her areas of specialization are Soviet history, Soviet Jewry, the Second World War, and the Holocaust and population displacement. Her current book manuscript examines civilian evacuation in the Soviet Union during the Second World War.

Paid for with funds from the Wexler Fund for Holocaust and Genocide Education.