Over the past month, several acts of vandalism and threats of violence have occurred across the Twin Cities metro. Beth El Synagogue was closed during part of the High Holidays due to threats later investigated by local police and the FBI. Thirty-two gravestones in Chesed Shel Emes Cemetery were toppled, and the Hmong Community Center in St. Paul was vandalized on the eve of the center’s museum opening. Most recently, antisemitic hate stickers were found on the University of Minnesota and University of St. Thomas campuses.

The acts in question, and the hate speech being spouted, are not hypothetical or imagined; they are real, politicized acts of violence targeting Twin Cities communities, which are in turn part of a massive upswing in hate crimes. When the second-largest Hmong community in the United States faces threats of violence, Jewish graves are desecrated, and stickers appear overnight on college campuses that support nativism and the vicious lie that Jews control the US, what will come next? There needs to be the political will to both condemn these acts and to engage in the difficult conversations that address and expose the roots and ramifications of antisemitic, anti-Asian, and other forms of racist violence that persist

White supremacist groups such as the Patriotic Front (responsible for posting the stickers across the UMN and the University of St Thomas campuses), as well as other individuals or organizations, even if disconnected, targeting Twin Cities communities under the premise that acts of violence should be normalized, are more prevalent than often acknowledged. Our politicians, elected to represent all of their constituents, and our University administration claiming to support more inclusive and just workspaces, must speak out and condemn these acts. We must work to not only stop this violence, but also to assure that targeted community members feel, and are, safe from attacks. 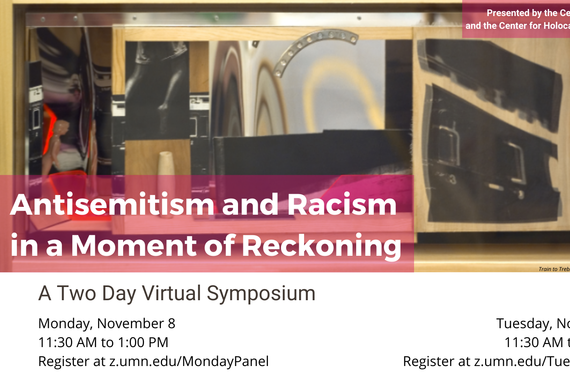 CHGS & CJS Hosted "Antisemitism and Racism in a Moment of Reckoning"

The Center for Holocaust & Genocide Studies and the Center for Jewish Studies hosted a two-day virtual Symposium on November 8 and 9.

In the wake of genocide and mass violence, states must decide whether and how to teach their populations about the violence.

We are pleased to offer curricular development grants to UMN graduate instructors for the 2021-22 academic year. Five $500 grants will be awarded to graduate students who