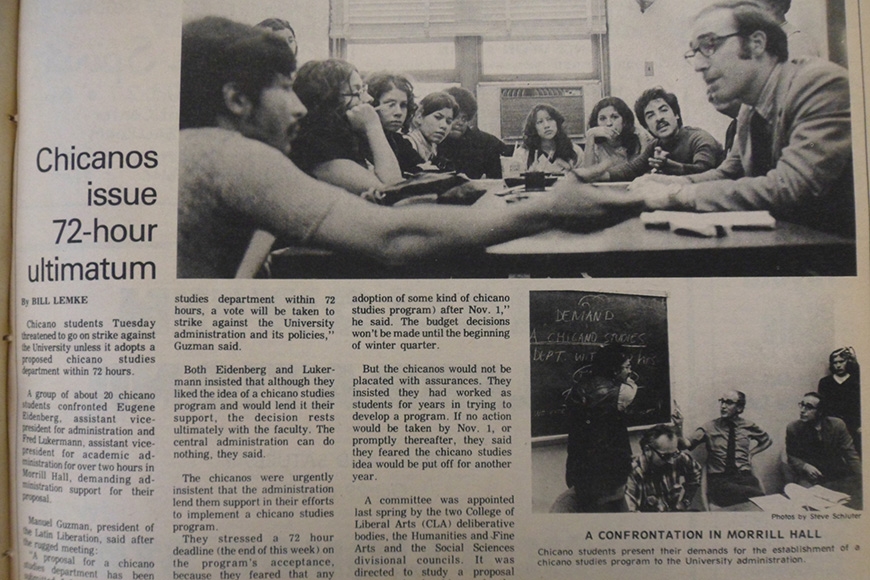 In 1970, Chicano students in Minnesota organized a week-long summer institute to explore the feasibility of establishing a Chicano studies department in the Midwest. Participants at the conference came from Wisconsin, Iowa, South Dakota, Nebraska, Illinois, Kansas, Indiana, Michigan, and Ohio. That summer, the 180 conferees, including migrant field workers from Texas, made a unanimous decision that the new unit should study Mexicans in their struggle to settle in the Midwest.

Under pressure from the Latin Liberation Front, a student-led group of Chicana and Chicano students from colleges in the Twin Cities, the University of Minnesota began to address financial aid, campus employment for students, and recruiting. In particular, the Latin Liberation Front strongly encouraged the creation of a Department of Chicano Studies at the University of Minnesota.

Dissatisfied with the pace of the University's response, on October 26, 1971, 20 Chicano students occupied the Twin Cities administration building, Morrill Hall.

Ramona Arreguin de Rosales of St. Paul, the first president of the Latin Liberation Front, noted in an interview with University historian Ann Pflaum that the administration "didn't understand the Chicano identity."

Following a two-hour meeting with administration officials, Manuel Guzman presented the group's demands: "If we do not have concrete evidence of the establishment or implementation of a Chicano studies department within 72 hours a vote will be taken to strike against the university administration and its policies."

Although an initial response from the college raised the possibility of the new department being combined with another existing department, Latin Liberation Front leaders rejected the idea, arguing that it would be crucial for the department to have a distinct identity.

Within three days of the occupation and ultimatum, College of Liberal Arts committees approved the proposal for a freestanding Chicano studies department. Rosales remembered that she and the other students held fast to their goal of a freestanding department, in part because of their conviction of its importance to future generations: "We knew that if we didn't win at that time—that cause—we weren't sure what was going to be the future of Chicano students and Latino students coming to the school, what was the future for our children and our children's children."

The Department of Chicano Studies accepted its first students in the fall of 1972 and was the first Chicano studies program in the Upper Midwest. Over the years, the opposition the Department of Chicano Studies raised to the strict educational definitions in the institution created challenges for its growth, as the department attempted to mitigate the tension between acting as an advocacy unit for the greater community.

At different times, a range of University leadership avoided accountability with the Chicano on-and-off campus community. In the spring of 2003, a handful of student activists at La Raza Student Cultural Center became extremely concerned over the neglected state of the Department of Chicano Studies, and they began to organize to address this problem. These Chicano and Latino students organized numerous meetings throughout the spring and summer of 2003.

It was during one of the strongest attended meetings in the summer of 2003 that the students' persistence and the support of their committed and politicized Chicano and Latino community supporters began to break the ice between the Department of Chicano Studies and the University leadership to ensure the department’s continuation.

Where we are today

Since the groundbreaking establishment of a Chicano studies department at the University of Minnesota, programs and departments have been established throughout the Midwest that are uniquely suited to the Chicano and Latino populations of their areas.

The departmental faculty continues to direct their energies and their enthusiasm toward the students who will be the leaders of the next generation. Central to the success of Minnesota's Department of Chicano Studies is a mission designed to cultivate research, teaching, and service to the community in an inter-related manner.

Over the years, the department has produced outstanding leaders in the academic professions, whose individual accomplishments have brought credit to Minnesota. The Department of Chicano Studies is especially proud of its many students from the St. Paul and Minneapolis communities who are intimately involved with University and community-based initiatives.

Chicana and Chicano student contributions to our department are highly valued, including their involvement in the selection of departmental faculty.

In 2012, after extensive discussion about the department's mission, the ongoing demographic changes occurring in Minnesota and throughout the nation, and the importance of enhancing awareness of our presence on campus, department faculty agreed that it was time to evolve into the Department of Chicano & Latino Studies. With this change, we remained deeply committed to our focus on the lived experience of people of Mexican descent in the United States, but we acknowledge that a comparative and transnational approach that showcases the intra-cultural diversity of the Latino population is important in fulfilling our educational mission at the University to ensure that students are well-informed about the complexity of the Latino community.

The Department of Chicano & Latino Studies is honored to contribute to the educational development and community involvement of such outstanding students. With this acknowledgment, we salute the many who were part of the department in its formative years, and who continue to support us with their courage and hard work.

Our identity, our work, and our commitment is to Minnesota, and we acknowledge our great debt to the generosity and good will of the colleagues, staff, students, and administrators who have supported us during the long haul.