Consuming the Enemy: A Conventional Metaphor for Conflict in the Hebrew Bible 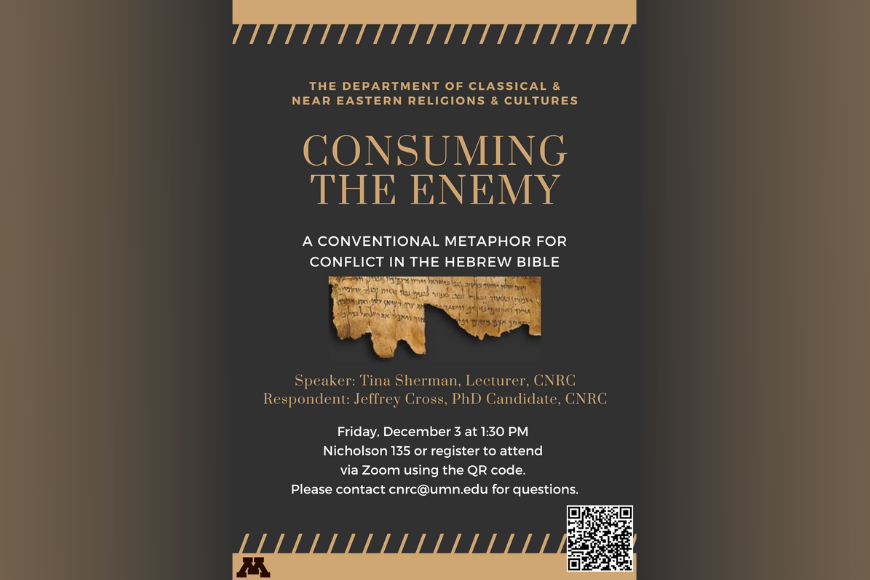 Title: Consuming the Enemy: A Conventional Metaphor for Conflict in the Hebrew Bible

Abstract: Many of the expressions the biblical authors employ to describe or narrate conflict between individuals and groups are metaphorical. They describe war between kingdoms using terms for individual combat. They depict physical and verbal attacks in terms associated with fire and burning. They also frequently use the language of eating and consumption to describe an attack on an opponent. Isaiah, for example, declares: “Aram from the east and the Philistines from the west—they consumed Israel by the mouthful” (Isa 9:11). And in Jeremiah, YHWH says of conquered Jerusalem: “I will punish Bel in Babylon and take what he has swallowed from his mouth” (Jer 51:44).  This paper draws on Conceptual Metaphor Theory to propose criteria for establishing how conventional these metaphors were in the biblical corpus, and examines how they developed.  My analysis indicates that the complex of biblical metaphors that depict being attacked or defeated in terms of being consumed by a person, place, or thing originated in specific images, such as predation by wild animals. The conceptual link between being attacked or defeated and being eaten was sufficiently conventional, however, that we also see more basic expressions that specify neither the type of eater nor the context of eating.