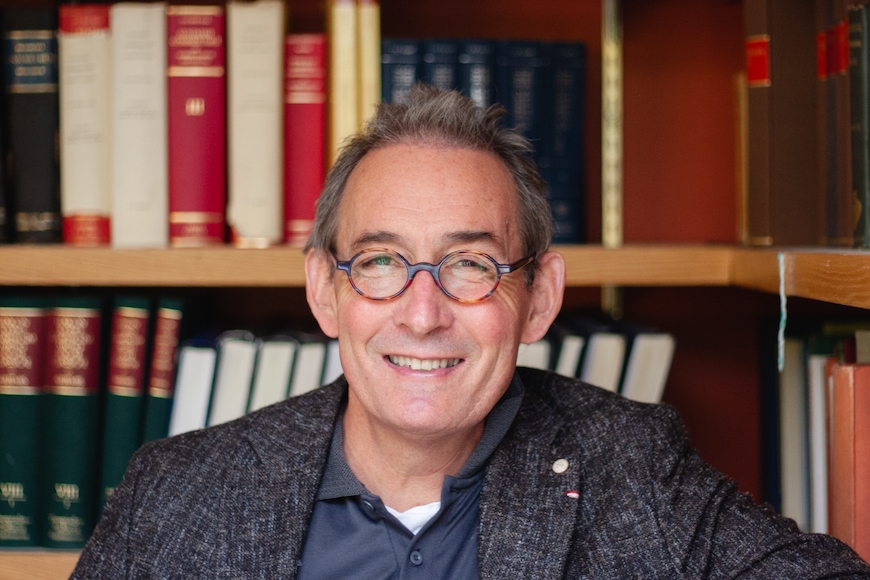 S. Douglas Olson has always been interested in languages. As a child, language instruction was an activity he had available to him in his small hometown. Olson was raised in a Christian fundamentalist household, and as a teen, he wanted to learn other ways of thinking about the world. This desire to change his thinking guided his academic pursuits, and when he went to college, he became interested in the academic study of religion, in particular, biblical studies.

Olson believes that reading the New Testament in its original Greek form is the best way to have the full experience. Hoping to engage organically with the text, Olson decided to pursue a degree in 5th-century BCE Greek. Since then, Olson has dedicated his time to combining fragments of ancient Greek and Roman literature and making them accessible for all readers.

Searching for Bits and Pieces of History

For Olson, working with fragments of ancient literature is rewarding because the text is “something…people aren’t aware exists.” When people think about ancient Greek and Roman literature, they do not think about little fragments of text that do not have context; they usually think of stories and poems that have been preserved in their entirety. The fragments of text are “beautiful stuff, it’s rich stuff, it’s fascinating stuff… that [one] couldn’t ever… start to read all in [their] lifetime,” says Olson.

Currently, Olson is working on pieces from a fourth-century comic poet named Antiphanes. Other than the about three hundred fragments from him that Olson has, Antiphanes has vanished from ancient Greek literature. Even less is preserved of one of Antiphanes’ main rivals, Eubulus.

“[It’s like] if you have the Rolling Stones and you have three albums by [them] and all you have…from the Beatles…are some occasional snippets,” says Olson. Figuratively, Olson’s job in that situation would be to figure out as much information from the Beatles snippets as he can because, even though there is not a lot known about them, everyone knows they were an important part in music history.

In reality, Olson’s role is to go through the existing bits and pieces of lost literature and squeezing out all of the information he can about the history, cultures, and practices of Ancient Greece. This includes everything from understanding what a word means and the significance of how it’s spelled to what customs are embedded in it and what parts of the world it represents.

Olson sees translating and understanding fragments of an otherwise lost text to be a way to create something readable and important for a modern audience. He says, “this is the creative thing…figuring out how to make this stuff…interesting and exciting, to make people open up one of these editions of fragment and make it a page-turner.”

Olson's work allows him to explore ancient literature and figure out how it relates to the modern world. He points out that Greek and Roman literature are “wonderful tools for talking in very interesting and sophisticated ways about our own issues…[One] can say ‘Who cares? It’s 2,700 years-old, what possible importance could it hold?’”

When people read The Odyssey today, for instance, they read it differently from how it was read fifty years ago. Olson sees ancient literature as an important way to learn more about how the world works and to help people understand why events occur. These fragments and stories can be read as “not actually about the fourth century BCE but about the 21st century,” says Olson.

“There’s this idea that [scholars in Greek and Roman texts] sit in [their offices] and scribble away at stuff that doesn’t mean anything to anybody, but it does,” Olson says. “These [ancient Greek and Roman histories and the study of them] are tools for thinking about issues that don’t have answers.”

People work on ancient Greek literature to integrate current political and social concerns.  “They combine the fragments in a way that is mostly revelatory of what it is they’re interested in and what they believe,” Olson says.

History can teach us about ourselves, each other, and humanity as a whole. The similarities between the past and present offer insight into who we are, fundamentally, and those similarities can guide modern ways of thinking. Because of this, Olson hopes to make Greek literature and fragments approachable to anyone.

“My goal as a scholar is to make material that’s really hard in a really difficult language, as accessible as possible to as many people as I can,” says Olson.