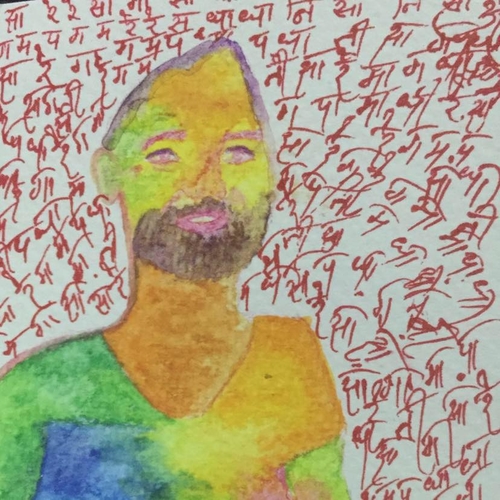 Matt Rahaim is a practicing Hindustani vocalist in the Gwalior tradition; his guru is Laxman Krishnarao Pandit. Matt is also an ethnomusicologist, an improviser (analog synthesizers, electroacoustic instruments, voice) and a composer of event scores. Matt's teaching includes musicking, intellectual exploration, and contemplative practice. Courses include Raga; Performance and Sociality; Sonic Ecology; Hindustani Musics; What do Voices Do?, and Practices of Listening.

Matt's ethnomusicological work focuses on Indian music and the mysteries of voice. His first book, Musicking Bodies: Gesture and Voice in Hindustani Music, dealt with the tacit bodily disciplines passed down through generations of Hindustani vocalists. His new book, Ways of Voice: Vocal Striving and Moral Contestation in North India and Beyond, investigates various traditions of voice production and vocal change in the Hindustani vocal ecumene. Recent philosophical essays include "Not Just One, Not Just Now: Voices in Relation" in the Oxford Handbook of Phenomenological Ethnomusicology and "Object, Person, Machine, or What: Practical Ontologies of Voice," in the Oxford Handbook of Voice Studies. His research and review articles have appeared in the Journal of Asian Studies, Theory in Ethnomusicology Today, World of Music, Asian Music, Yearbook for Traditional Music, Gesture, The Oxford Handbook of Voice Studies, Music and Empathy, and New Perspectives on Music and Gesture. He also is the author of the article "Music" in the Brill Encyclopedia of Hinduism.

Other interests include voice studies, devotional performance, relationality, Sufi and Bhakti poetry, the anthropology of ethics, practical ontology, the Hermetic esoteric tradition, the performance of speech, the interface of raga and maqam, practices of listening, birdsong, and a critical approach to theories of tuning and temperament that bridges arithmetic, aesthetics, and politics.

His other performance experience includes oud, Afro-Cuban drumming, simulogue, improvised drones, shape-note singing, experimental vocal performance, Thank-You-Play, and Javanese gamelan. Matt also studies and teaches Middle Eastern music. In spring of 2010, he was studying oud performance and Arabic language in Damascus, Syria, funded by an ACM-Mellon Post-Doctoral fellowship; in 2012, he was a visiting fellow at the Center for Behavioral Research at the American University in Beirut; in 2014, he was a visiting Fulbright fellow at Lalit Kala Kendra at the University of Pune.

Matt studied at Wesleyan University (BA, 2000) and UC Berkeley (PhD, 2009). Before coming to the U of M, he taught Religious Studies, Music and Asian Studies at Berkeley, Stanford, and St. Olaf College. Matt believes in the liberal arts, and he believes in going slowly.