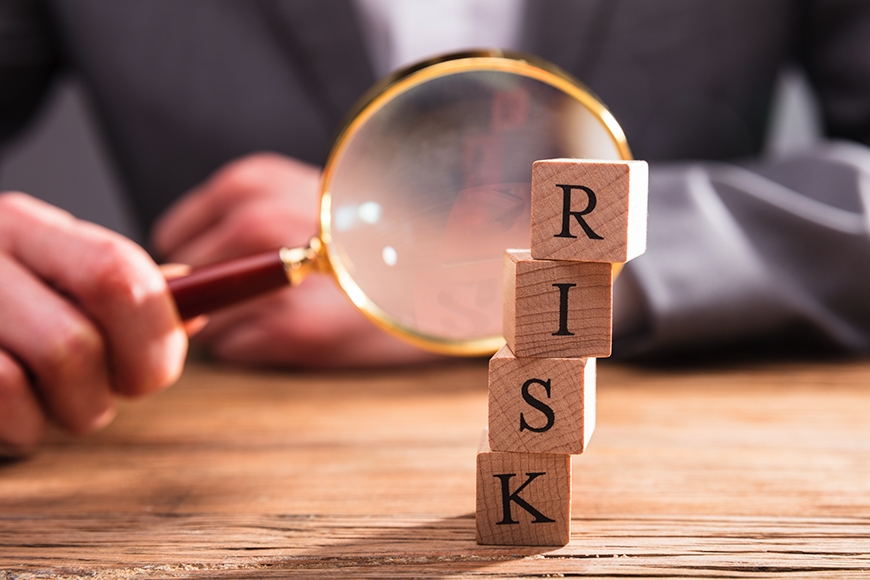 KEY POLICY INSIGHT: Since 2000, public pension funds have increased the levels of asset risk in their portfolios, principally through their allocations to illiquid assets. Going forward, a stable public pension system requires policy with well-articulated rules for contribution rates, the use of market-based interest rates to value pension obligations, and a clear rule governing funding. 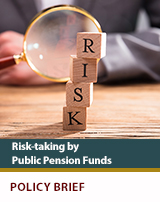 U.S. public employee pensions face funding pressures – recent estimates suggest that public funds have 75 cents for every dollar of pension obligations (1). Since 2000, the funding status of U.S. public funds has decreased. Moreover, since 2008, investments in less liquid alternative asset classes have increased (2). Many of these investments are potentially exposed to the same underlying risks as equities (3). Consequently, long run risk levels of public pension funds are likely to have increased.

This policy brief addresses these questions as follows. First, we relate the increases in portfolio risk to increases in exposures to alternative assets, and private equity in particular. We show that target return premiums on pension assets have increased over the past 17 years. We argue that the observed increase in portfolio risk is a rational response to the observed increase in target return premiums.

Second, we show that the increased return premiums coincide with decreases in pension contributions over the same period. To maintain pension funding, when contributions decrease, more of the burden must be carried by investment performance.

Finally, we discuss the implications for pension policy design for public pensions. We propose that sensible policy for public pensions should: (a) use market-based interest rates to value pension benefits and (b) set rules governing capital requirements for public pension funds. Both of these changes would alleviate many of the issues associated with providing sufficient funding. Moreover, these types of policies are in line with what state insurance regulators require for private insurance providers. 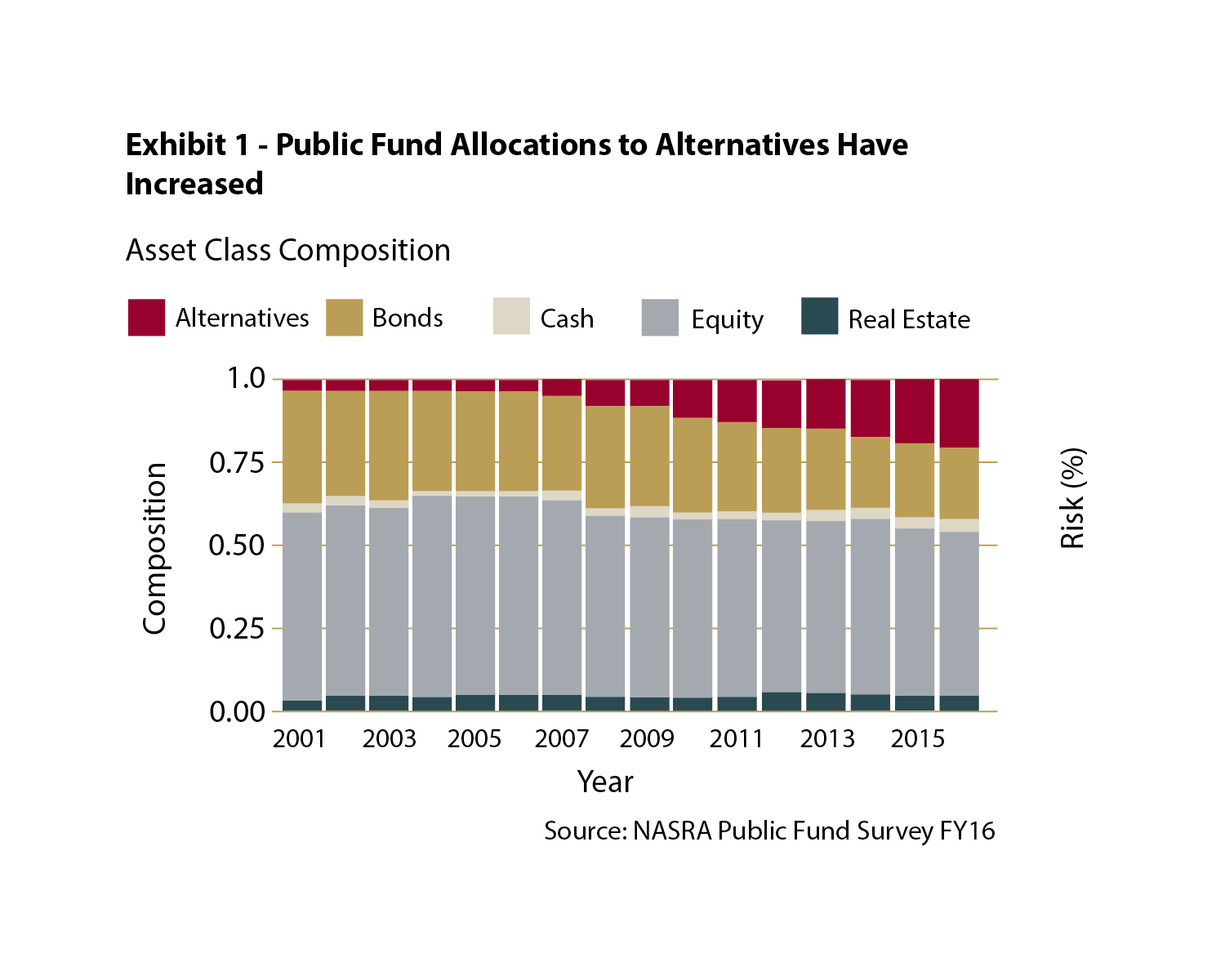 Risk-taking at Public Funds has Increased

Since 2008, asset portfolios at U.S. public pension funds have increased their allocations to so-called alternative investments (e.g. private equity, hedge funds, infrastructure and private real estate). This point is illustrated in Exhibit 1. According to NASRA data, in 2000 the median allocation to alternatives was less than 5%, while in 2016 the allocation had increased to around 20%.

Exhibit 1 also shows that over the same period the allocations to bonds and cash decreased. These investments are typically regarded as low risk assets. Thus, on the surface it would seem as if the risk levels for U.S. public funds have increased over the past 17 years. 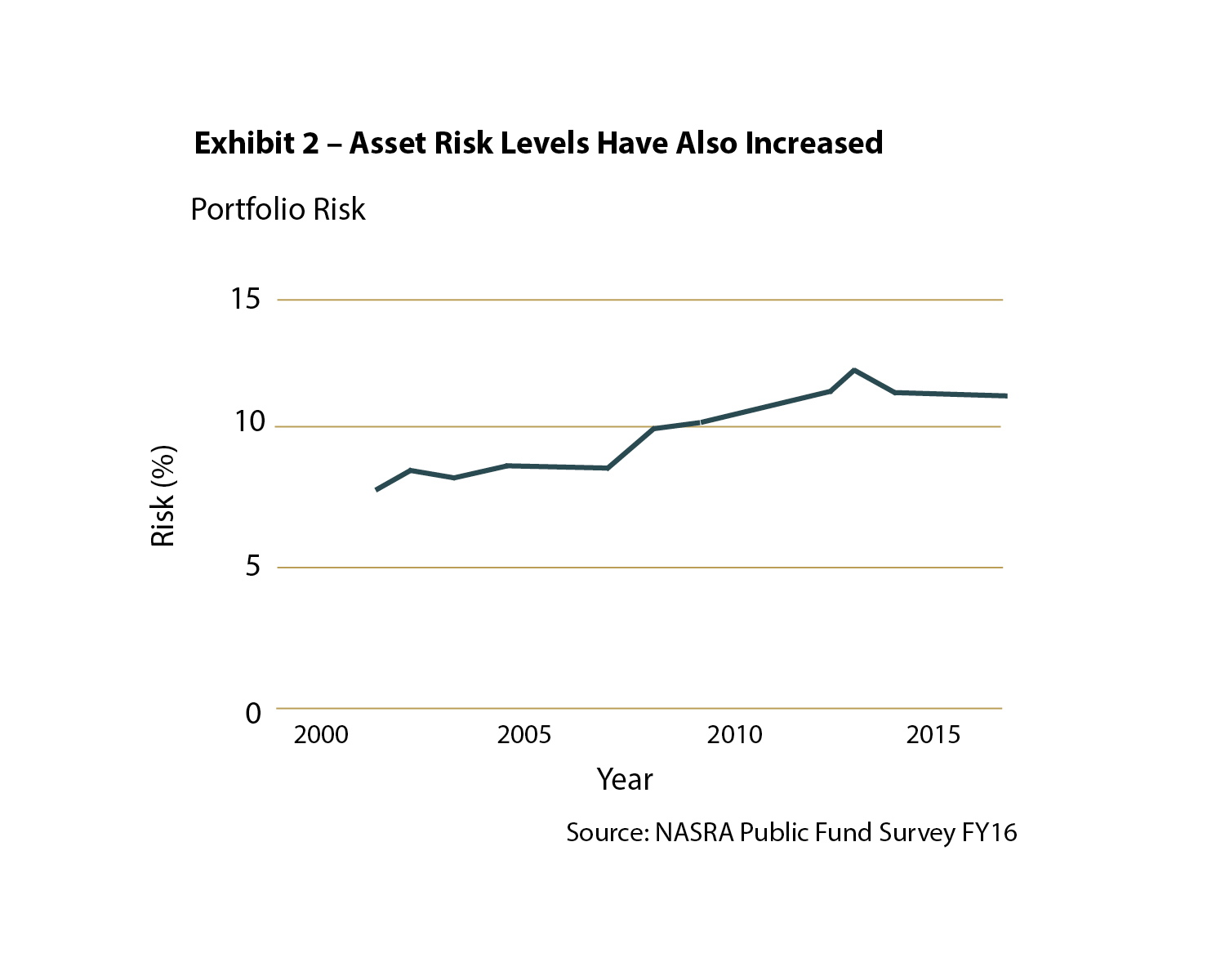 The investment policies of public pension funds depend on their target rate of return. This figure reflects the rate of return that the fund believes they can achieve over a long time period (e.g. 10 years). As distinct from other institutional investors (for example, U.S. corporate pension plans), the target rate of return has also been used to value future pension obligations. 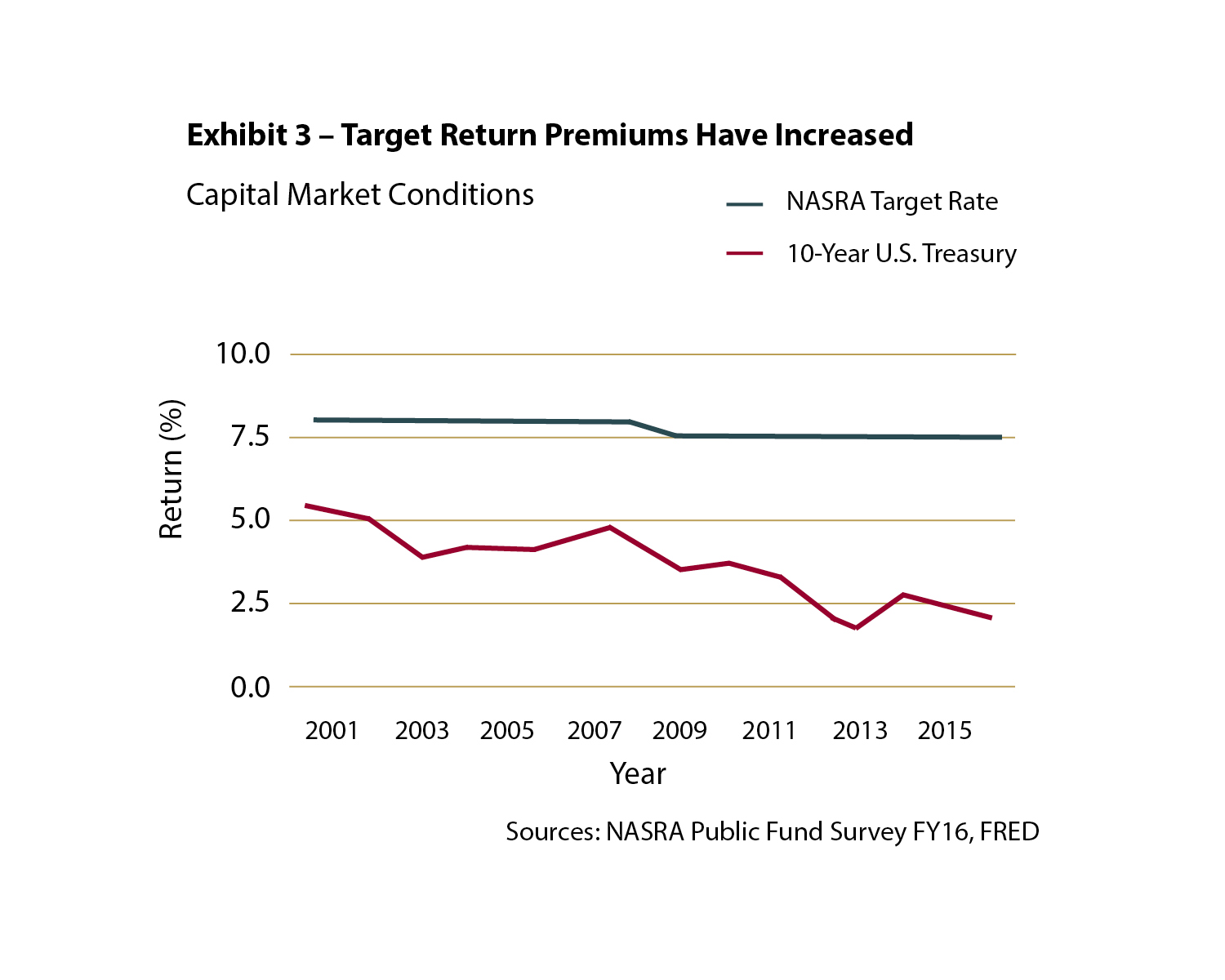 Exhibit 3 plots the median target rate of return for US public funds since 2000 and compares it to the yield-to-maturity of a U.S. 10-year Treasury note (5). (The 10-year Treasury yield is used as a proxy for risk-free investments).

Also shown in the exhibit is the difference between the target rate of return and the U.S. 10-Year Treasury note. This figure represents the required return in excess of the risk free rate. Its economic function is to determine the allocation between risky and risk free assets. All else equal, higher return premiums increase the allocation to risky assets and vice versa. 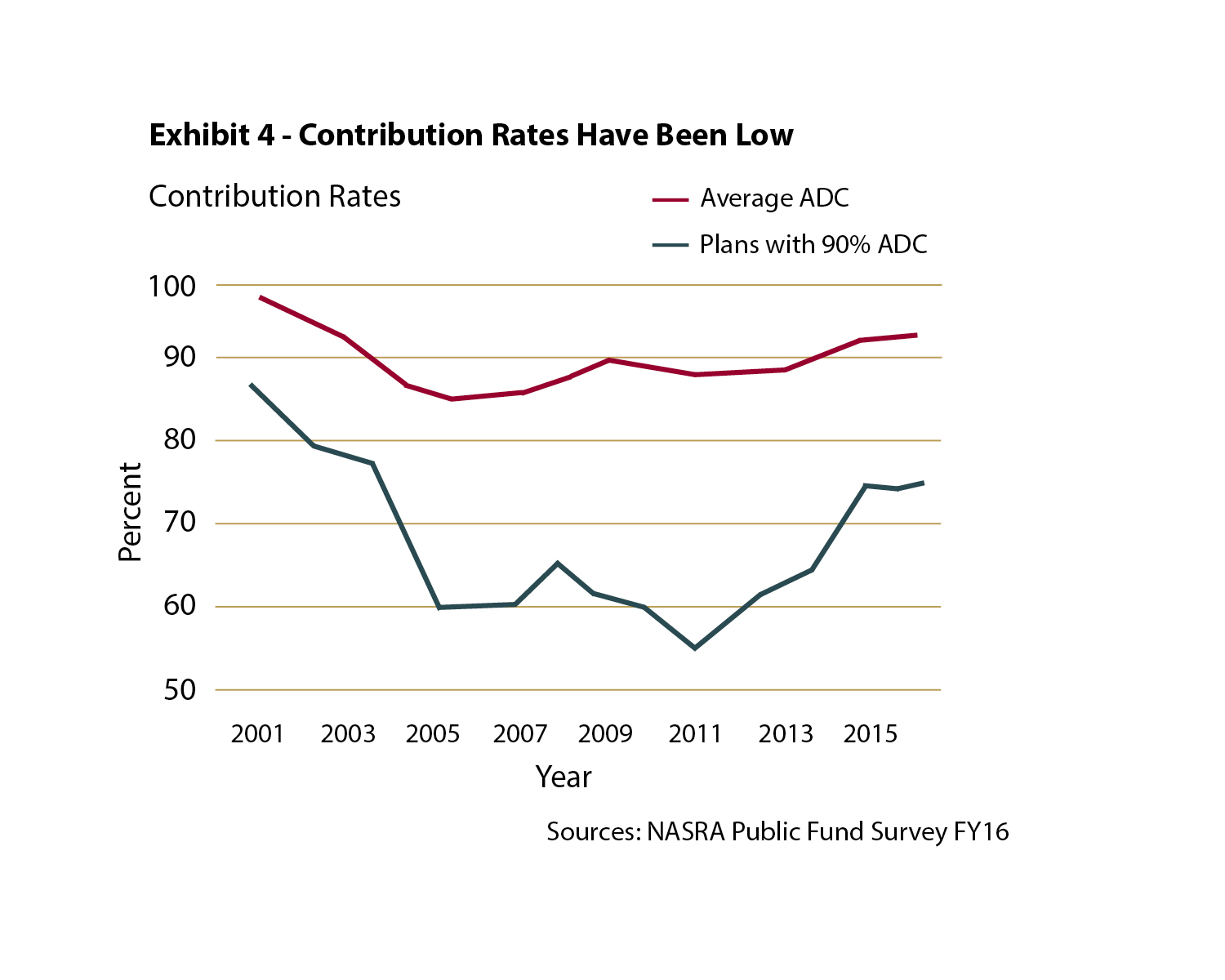 This point is nicely illustrated in Exhibit 4. From 2000-11, contributions to state pension assets relative to required levels decreased (6). It can, of course, be argued that the decrease in contributions during the 2008-11 period should be attributed to the effects of the global financial crisis. However, contributions were below their required levels before the crisis (7).

Our analysis has documented that since 2000, public pension funds have increased the levels of asset risk in their portfolios, principally through their allocations to illiquid assets. We have also shown that over the same period, contributions to public employee pension funds have been below required levels. We have argued that the increase in risk is a rational response by pension investment managers to increased target return premiums. And, we have argued that the increase in target return premiums has been facilitated by the absence of the discipline of a market interest rates to value pension obligations and the lack of a full-funding requirement.

A conclusion that can be drawn from our analysis is that the foundation for sound policy for public pensions is well-articulated rules for contribution rates; the use of market-based interest rates to value pension obligations, and a clear rule governing funding (e.g. a requirement for full funding). Fortunately, most states have examples of such policies readily available to them through their state insurance commissions (8). These commissions set the regulations for capital requirements and the valuation of future insurance obligations (i.e. the interest rate used to value insurance claims). These regulations are set up to protect both beneficiaries and shareholders (9). Going forward, policymakers should consider how to apply the regulatory structure for insurance companies to public pension funds.

(4) The asset allocations were taken from the NASRA website (www.nasra.org). For computational ease, the private equity allocation was modeled as a levered exposure to public equity. The logic is that cash flow generation for public and private equity should be about the same. Thus, from an economic risk perspective, the only differences are leverage and the availability of daily pricing.

(7) An alternative explanation for increasing target return premiums is that expected asset returns increased, perhaps as a function of an increase in macroeconomic uncertainty.

This policy brief was made possible through generous support from the Laura and John Arnold Foundation. Policy briefs from the Heller-Hurwicz Economics Institute are intended to convey policy relevant research done by researchers associated with the Institute and do not represent the position of the Institute or its funders.
Kurt Winkelmann, Jordan Pandolfo, Wesley Janson & Matthew Murphy
Share on: