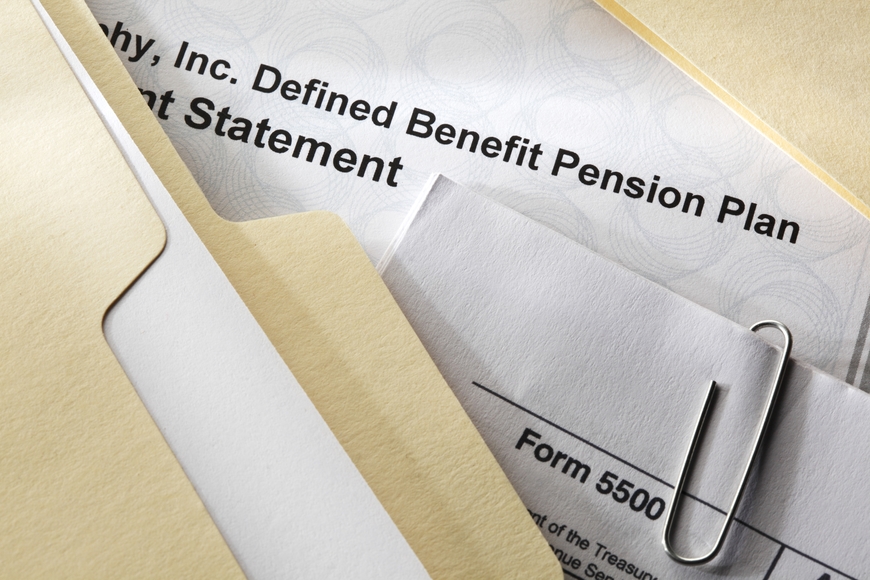 Key Policy Insight
Low levels of interest rates have rekindled interest in using Pension Obligation Bonds (POBs) as a tool to resolve funding challenges for US public pension plans. Our analysis suggests that under current governance, POBs only resolve funding challenges over the short term. Furthermore, under our assumptions both taxpayer and beneficiary economic welfare is adversely affected by POBs. Hence, unless bond issuance is accompanied by structural changes in governance, they are a bad idea.

There have been recent rumblings (see pionline.com, March 2020) that states and municipalities should resolve their pension funding woes by issuing Pension Obligation Bonds (POBs). Our work leads us to the opposite conclusion — POBs are a bad idea, regardless of the level of interest rates. Although POBs resolve short-term funding issues, they do not resolve the fundamental longer-term governance issues that plague US Public Defined Benefit Plans.

We argued in an earlier brief that the governance structure of US Public Defined Benefit plans made funding issues almost inevitable. If these issues are left unaddressed, POBs simply delay the timing of the funding challenges. In this brief we apply the same simulation methods to shows that although POBs may resolve short term funding challenges, for the most part they do not improve taxpayer welfare.

WHAT ARE POBs AND HOW ARE THEY USED?

The basic idea behind POBs is quite simple and relies on the observation that state borrowing rates are less than the assumed expected return on a pension fund’s investment portfolio. In principle, a state with an underfunded pension fund borrows at the lower rate, invests the proceeds in higher returning assets, and repays the bond through tax revenue. The benefits to the state are that the pension is fully funded, and projected annual pension expense decreases.  Of course, pension expense doesn’t actually disappear -- it has simply been shifted away from the pension accounts and onto bond repayment.

Actual experience with POBs has been mixed, at best. Detroit, Stockton, CA and San Bernardino, CA all issued POBs to, in principle, resolve their pension funding issues. All wound up suffering further deterioration in funding. By contrast, Milwaukee County and Contra Costa County issued POBs and were able to more than adequately manage both county and pension budgets. Earlier commentary on POBs suggests that the main differentiator between these examples is whether the issuance of POBs has been accompanied by fiscally sound management of both pension and government budgets.(1)

Our earlier brief argued that the incentive structures in public DB pension plans are almost designed to produce funding challenges. In this section we’ll use a simulation to show that unless these governance issues are resolved, POBs simply shift the timing of the funding challenges. Consequently, our analysis suggests that taxpayer welfare decreases when a POB is used.

To set the stage, we consider a hypothetical state whose funding ratio is 68%. We’ll assume that the state has introduced a pension reform with three features. First, all public employees with over 20 years of experience as well as current retirees continue to receive their pension benefit. Second, all new public employees receive a hybrid plan consisting of 50% invested in the old defined benefit (DB) plan and 50% invested in a defined contribution (DC) plan. Third, workers with between 1 and 20 years of experience receive a mix (scaled as a function of years of service) of the DB and DC plans. Finally, workers who receive the DC plan also receive modest increases in compensation, which is invested in the new DC plan.

Now we’ll introduce a POB. The principal amount is determined by comparing the market value of pension assets to the present value of pension benefits. We use the target rate of return on assets (assumed to be 7.5%) to find the present value of pension benefits. We assume that the principal and interest payments are amortized over a 30-year period using the state’s municipal bond yield (in our example, we assume a 2.5% yield). Further, we assume that taxes are increased by the annual repayment of the outstanding principal and interest. The proceeds from the bond issue are invested in the pension fund’s investment portfolio.

The final issue to consider is the fund’s governance. In keeping with our earlier brief, we assume that the fund both fails to meet both its target return and its annual required contributions.

Next, we simulate three fiscal measures. These are the level of taxes, the level of tax volatility and the pension funding ratio (i.e. the value of pension assets relative to pension liabilities). We’re interested in the evolution of each of these under three scenarios: no reform, reform but no POB, and reform with a POB.

Exhibit 1 simulates the impact on average taxes over a 45-year period. Relative to the no reform case, taxes are slightly higher with the pension reform. However, the level is constant throughout the simulation period. When the POB is introduced, average taxes increase throughout the first 30 years of the simulation. Once the POB is retired at year 30, average taxes are lower than either of the other two cases. This result should not be surprising, as the bond recognizes the current pension deficit on the income statement. 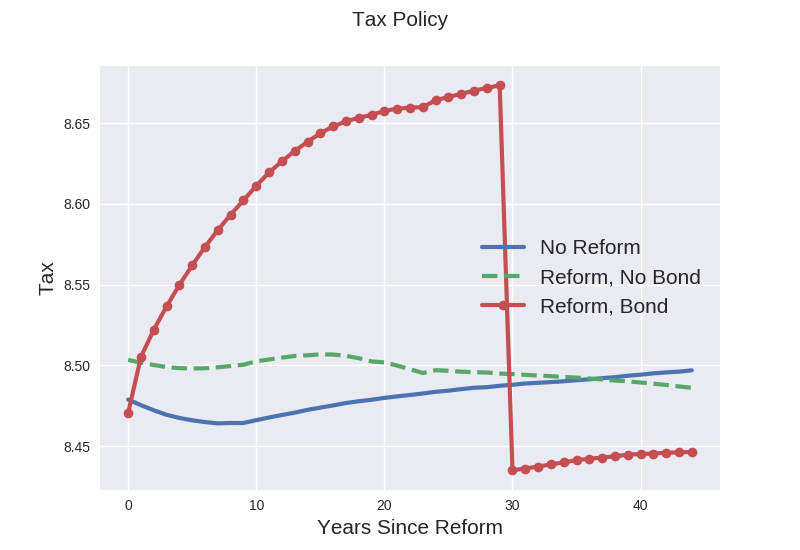 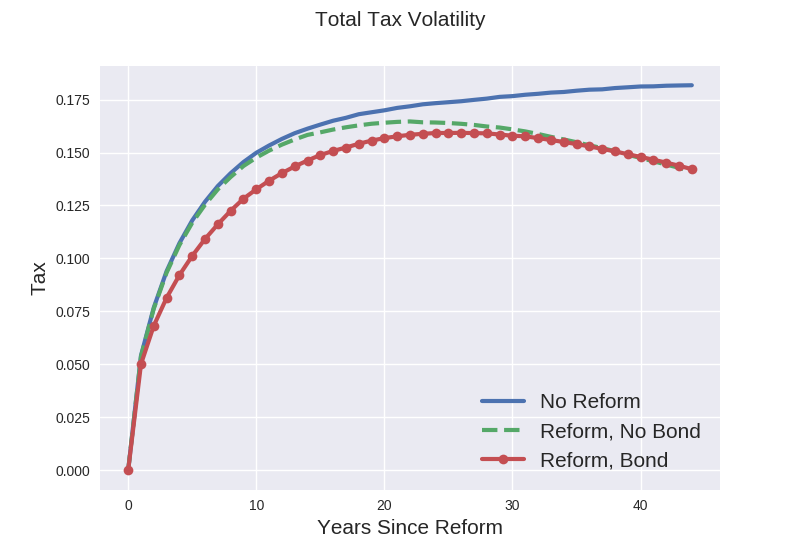 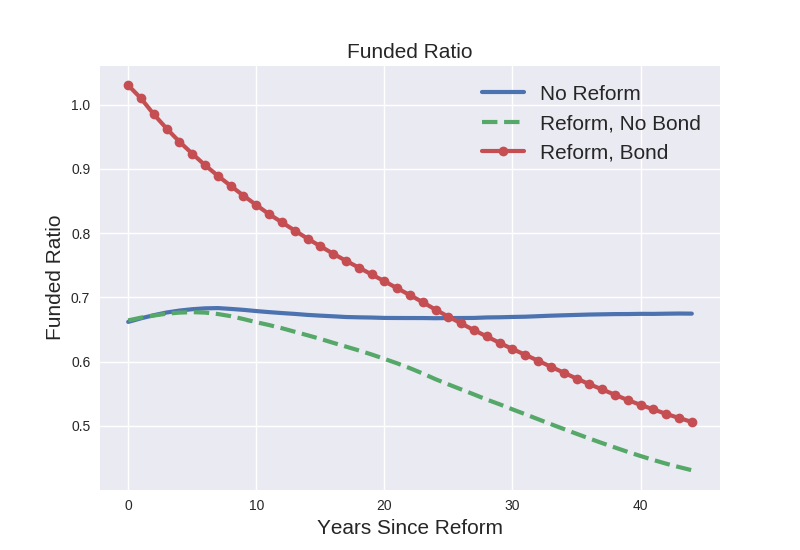 It is also important to note that while the funded status deteriorates in the reform case relative to the no-reform case, it is doing so on a lower base of liabilities.(4) As the population ages, the value of DB liabilities decreases, since the DB guarantee is lower relative to the no reform case. As our earlier brief pointed out, there is nothing in the previous 20 years that suggests that on average state Treasurers will meet the ARC, nor pension investments achieve their target returns. Thus, in the absence of fundamental reform to governance, the POB only resolves short term funding challenges.

To sum up, the POB improves the pension’s short-term fiscal position. It does so by increasing taxes over the bond’s amortization period, which is a negative for taxpayers. On the other hand, taxpayers gain because tax volatility decreases with the POB in our simulation. How should taxpayers and beneficiaries evaluate these tradeoffs?

As discussed in earlier briefs, our preferred measure is expected economic welfare. We use this measure because it explicitly incorporates sequences of levels (of returns and taxes) and volatility (of returns and taxes) into decision making. Furthermore, by using this measure we can explicitly acknowledge the impact of welfare changes across generations. On this measure, under our assumptions on balance the POB does not improve either beneficiary or taxpayer welfare, relative to the no-POB case. This point is illustrated in Exhibit 4. 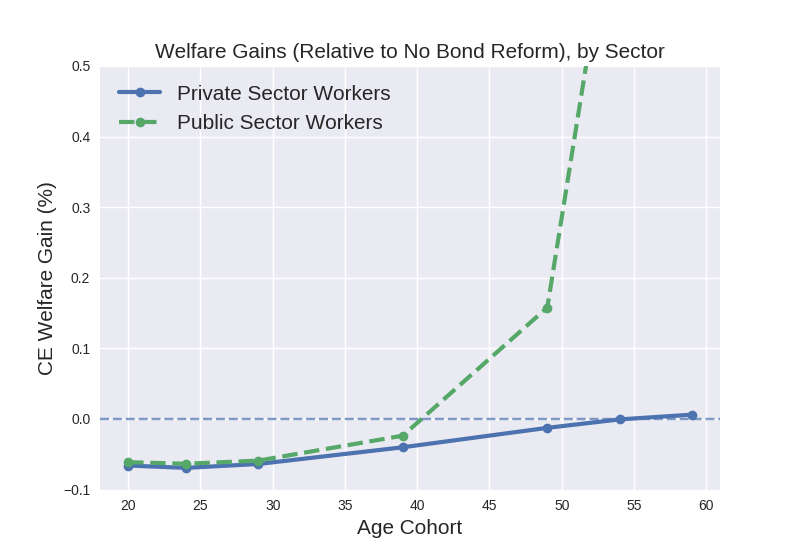 The second interesting point is that the POB improves welfare for both older taxpayers and older beneficiaries. For beneficiaries, our simulation suggests that welfare increases for those over age 40, principally because the odds of a receiving a distribution from surpluses have increased. Taxpayers over age 60 also gain, principally because the improved fiscal position reduces their exposure to tax volatility.

At their most basic, POBs are meant to solve one problem: short term pension accounting. However, on balance they do not improve taxpayer welfare. The benefits of moving the pension deficit onto the balance sheet and restoring short term pension balance are swamped by basic governance issues. Policymakers still retain three options: first, the ability to contribute less that their annual required minimum; second, the ability to set high target returns, and third, the ability to distribute any pension surpluses to beneficiaries. In fact, because the DB pension deficit would still be off-balance sheet, it could be argued that each of these options looks more attractive to policymakers with the POB. Taxpayers and beneficiaries should be wary of any POB that isn’t accompanied by fundamental reform of each of these governance issues.

FOOTNOTES
1  An oft-cited study is Alicia Munnell et al. at the Boston College Center for Retirement Research. Munnell, A. H., Calabrese, T., Monk, A., & Aubry, J. P. (2010). Pension obligation bonds: financial crisis exposes risks. State and Local Issue in Brief, 9.
2  Sources: fmsbonds.com and treasury.gov.
3  We are using tax volatility as a stand-in for both changes in tax levels and changes in service levels.
4  In this simulation, at the end of the 45-year simulation period, liabilities post reform are roughly 38% lower than pre-reform.

This policy brief was made possible through generous support from Arnold Ventures. Policy briefs from the Heller-Hurwicz Economics Institute are intended to convey policy relevant research done by researchers associated with the Institute and do not represent the position of the Institute or its funders. 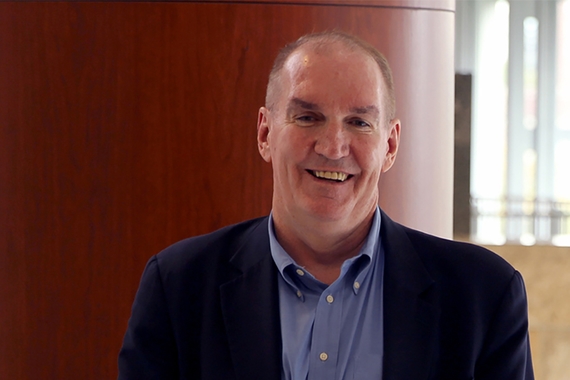