An American artist who was part of the Los Angeles art world, Gloria de Herrera left the US during the McCarthy era. 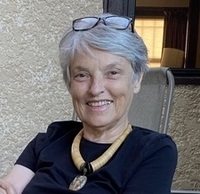 This talk is part of a larger project entitled "The Cold War, Art, Politics and Transnational Activism in the ‘lives’ of Gloria de Herrera" which examines the activism of American artists and writers in Paris during the Algerian War of Independence (1954-1962). De Herrera was an American who got involved in the art world in Los Angeles and left the US during the McCarthy era.

Patricia Lorcin is a professor in the Department of History and the Samuel Russell Chair in Humanities.

The Samuel Russell Chair is made possible through a generous gift from Jim and Teddy Gesell in honor of their fathers.