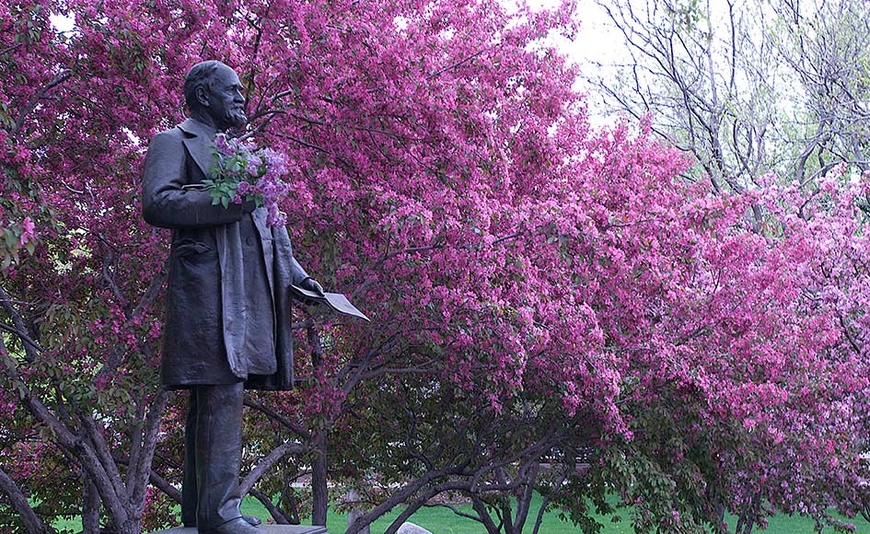 Statue of John S. Pillsbury, "father of the University" and benefactor of Pillsbury Hall

With its arched entryways and patterned sandstone, Pillsbury Hall has been called “the best remaining example of nineteenth Century architecture on the Minneapolis campus.”

Designed by LeRoy S. Buffington in the Romanesque style of Henry Hobson Richardson, it is considered his finest work still in existence. Buffington also designed and constructed Burton Hall (1894), Nicholson Hall (1890), and Eddy Hall (1886). In addition, John S. Pillsbury contracted Buffington for the Pillsbury “A” Mill.

Harvey Ellis, an associate at Buffington’s firm, is believed to have been the design architect for the Pillsbury Hall project. Roger G. Kennedy, one-time director of the National Museum of American History at the Smithsonian, named Ellis “an elusive American genius”; he is best known for “mission” furniture designs produced by Gustav Stickley’s company.

Description of the property

The differing fenestration of each of Pillsbury Hall’s three stories adds character to its composition with deep arches at the first level and rectangular openings intersected by horizontal stone mullions on the upper levels.

The walls are sandstone set in a broken-range ashlar pattern with a geometric pattern capping the central rectangle. The tile roof delicately shelters the massive blocks. Pillsbury Hall’s simple, rectangular form is articulated by asymmetrical elements adding interest to the overall composition. The massive terminating bay on its easterly end, its silo-like tower marking the interior stair, and the blocky chimney play with the building’s straightforward organization.

The matching, graceful entrances on the Pillsbury Drive facade are inviting and mysterious: the shallow sweep of stairs countered by the shadowy enclosure of the arch, which they penetrate, bring a sensory awareness of unseen, inner depths.

The Roles of Buffington and Ellis

Pillsbury Hall’s historical significance owes not only to the role it played in the early development of the University of Minnesota, and to the role played by Governor John S. Pillsbury in personally financing its construction, but also to the architect he selected to design the new hall: LeRoy S. Buffington.

LeRoy Buffington ranks among the preeminent American architects. Known for the romantic undercurrents of his designs, including Pillsbury Hall done in the Romanesque style of Henry Hobson Richardson, he claimed to be the first to apply for and receive a patent for the steel-frame construction of commercial buildings—i.e., skyscrapers. (His claim was later refuted, but he did much to refine the new method of construction.)

Buffington, born in 1848 in Cincinnati, settled in St. Paul in 1871, gained prominence working as an associate of a local architectural firm, and opened his own office in Minneapolis in 1874. By the 1880s, his office reportedly was one of the busiest places in the city. Among the numerous public buildings and private residences he designed were homes for several branches of the Pillsbury family and the Pillsbury “A” Mill. He designed several buildings over the years for the University of Minnesota, including Eddy, Burton, and Nicholson Halls. Pillsbury Hall is considered the finest example of Buffington’s work that is still standing.

Harvey Ellis—then an associate in Buffington’s firm and today perhaps best known for designs he contributed of the “mission” style furniture produced by Gustav Stickley’s company—is believed to be the architect who drew up the scheme for Pillsbury Hall. He is credited with bringing the Richardsonian Romanesque style to the cities of Minneapolis and St. Paul during the time he was with the Buffington firm, from the mid-1880s to mid-1890s. Many designs attributed to Buffington are believed to be those of Ellis, who had a propensity to remain anonymous. Among designs known to be his are Union Station and the entrance gates to Washington Terrace in St. Louis

In a speech given in 1990, Roger G. Kennedy, director of the National Museum of American History at the Smithsonian Institution, termed Ellis “an elusive American genius.” Ellis returned to his native Rochester, New York, in 1894; his designs during this period reflect his appreciation for the aesthetic principles of the Arts and Crafts movement.