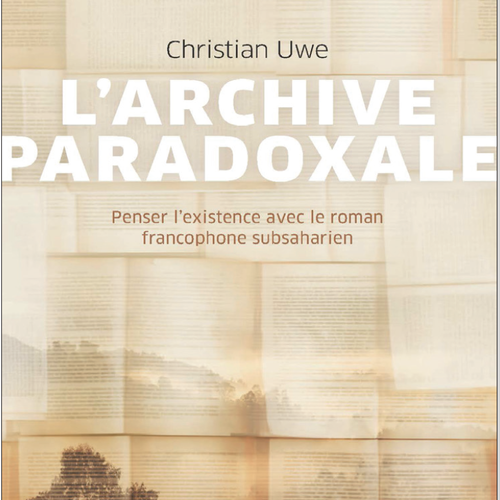 Christian Uwe’s work joins together literature, semiotics, and philosophy to explore contemporary forms of cultural and political existence. Although he focuses on French, Sub-Saharan, and Caribbean literatures of 20th and 21st centuries, questions raised in his work underscore the importance of transcending rigid spatial, temporal, and disciplinary boundaries to facilitate a comparative understanding of political crises such as contemporary afterlives of the colonial project, environmental degradation, migration, and attendant geopolitical conflicts.

Uwe is the author of two books, both of which explore the intersection of aesthetics and politics not just in the act of artistic creation and reception, but also with regard to the role of aesthetic rationality in human existence. His first book (Le Discours choral: essai sur l’œuvre romanesque d’Édouard

Glissant, Peter Lang, 2017) examines the totality of Glissant’s fiction, centering a problem that undergirds his entire work: if the system of slavery thrives on depriving the slave of all means to self-determination, how does a people manage to develop a sense of self and of history in those conditions? The stakes of such a question are not merely intellectual, they determine concrete ways in which individuals and collectivities face a traumatic past and develop creative strategies of resistance. His second book (L’archive paradoxale: penser l’existence avec le roman francophone subsaharien, University of Montreal Press, 2022) extends this line of inquiry to contemporary sub-Saharan novels. The notion of “paradoxical archive” helps theorize the constitutive centrality of thought in human existence: the human being is an aesthetic being, not because it creates art, but—more fundamentally—because it creates itself through aesthetic means. However, this constitutive function comes with a paradox: the semiocultural means that humans use to secure their existence can also be used to threaten it. Uwe has also contributed essays in edited volumes and such academic journals as Études françaises, Présence francophone, Francosphères, Dalhousie French Studies, and others.

Professor Uwe is currently working on two book projects: the first revisits the question of the political purchase of Glissant’s concept of Relation in our globalized environment; the second examines forms of social and political (non)existence of sexual minorities in contemporary sub-Saharan Africa.

Additionally, Uwe is a co-convener of a 9-day international conference on Édouard Glissant as part of France’s prestigious Cerisy conference series (August 2022).