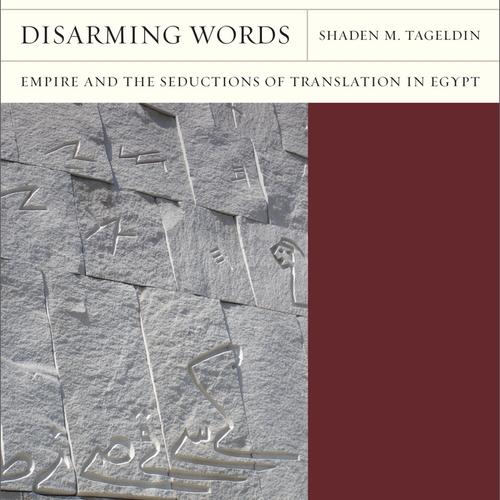 Shaden M. Tageldin is associate professor of cultural studies and comparative literature in the Department of Cultural Studies and Comparative Literature (CSCL) at the University of Minnesota. She earned her Ph.D. in comparative literature from the University of California, Berkeley. From 2014–2018, she was the founding director of the African Studies Initiative, a Title VI African Studies National Resource Center at the University of Minnesota funded by the U.S. Department of Education, and a University-wide platform—interdisciplinary and intercollegiate—for Africa-related research, curriculum development, and outreach. She also has served as director of graduate studies for the Ph.D. programs in Comparative Literature and Comparative Studies in Discourse and Society as well as for the interdepartmental graduate minor in Moving Image Studies, and as curriculum coordinator for CSCL.

Focusing on nineteenth- and twentieth-century literatures in English, Arabic, and French, Tageldin’s research and teaching engage several fields within a translingual compass: empire and postcolonial studies; critical translation theory; trans-African and trans-Asian studies; the historiography of literary and cultural “renaissances”; the politics of language, literary form, and literary genre; the history and ideological underpinnings of comparative literature and its sister epistemologies; and literatures of migration and diaspora. She is the recipient of a 2013–2014 Arthur “Red” Motley Exemplary Teaching Award from the College of Liberal Arts at the University of Minnesota. Her first book, Disarming Words: Empire and the Seductions of Translation in Egypt (University of California Press, 2011), was awarded the Honorable Mention for the 2013 Harry Levin Prize of the American Comparative Literature Association (ACLA); the doctoral dissertation from which it evolved won the ACLA’s 2005 Charles Bernheimer Prize. Tageldin is currently completing a new book, provisionally titled Toward a Transcontinental Theory of Modern Comparative Literature, that reframes dominant origin stories of the discipline. Taking the case of Arabic, English, and French literary discourse—one of many possible East/West and North/South constellations—the book poses a foundational question: What are the epistemic conditions of possibility that make a comparison of literatures thinkable? Tageldin argues that the long-nineteenth-century struggle to make language and “life” mutually translatable in Arabic, English, and French literatures—among others—informed ideologies of comparability that underpin the modern discipline of comparative literature. In so doing, she articulates a theory of why and how literatures became comparable in the modern period. Thus far, she has published three peer-reviewed essays that inform the project: “Abū Shādī, Tagore, and the Problem of World Literature at the Hinge of Afroeurasia,” in Journal of World Literature (2019); “Beyond Latinity, Can the Vernacular Speak?”, in Comparative Literature (2018); and “Fénelon’s Gods, al-Ṭahṭāwī’s Jinn: Trans-Mediterranean Fictionalities,” in Philological Encounters (2017), awarded Honorable Mentions for the 2017 Interdisciplinary Nineteenth-Century Studies Richard Stein Essay Prize and the 2018 Article Prize of the Nineteenth-Century Studies Association.

Tageldin’s research has been supported by a National Endowment for the Humanities (NEH) Fellowship; an American Council of Learned Societies (ACLS) Frederick Burkhardt Residential Fellowship for Recently Tenured Scholars, held at the John W. Kluge Center of the Library of Congress; a U.S. Fulbright Scholar Research Award in Egypt; a Europe in the Middle East—The Middle East in Europe (EUME) Postdoctoral Fellowship, co-sponsored by the Fritz Thyssen Foundation, the Wissenschaftskolleg zu Berlin, and the Berlin-Brandenburg Academy of Sciences; an NEH Summer Stipend; and faculty fellowships from the Institute for Advanced Study at the University of Minnesota, among other University grants. Her work has appeared in Comparative Literature, Comparative Literature Studies, International Journal of Middle East Studies, Journal of Arabic Literature, Journal of Historical Sociology, Journal of World Literature, Philological Encounters, and PMLA, as well as in numerous edited volumes. Her essay “Secularizing Islam: Carlyle, al-Sibāʿī, and the Translations of ‘Religion’ in British Egypt,” in PMLA (2011), was awarded the Interdisciplinary Nineteenth-Century Studies Essay Prize for 2011.

Since 2018, Tageldin has served as a senior editor for the Oxford Research Encyclopedia of Literature, an online project of Oxford University Press. She is also a member of the editorial board of Comparative Literature, the advisory board of Comparative Literature Studies, and the editorial advisory board of the Journal of Arabic Literature, and she has served on the editorial advisory board of Philological Encounters and as a member of the Zukunftsphilologie Collegium of the Forum Transregionale Studium in Berlin. For the Modern Language Association (MLA), Tageldin has served as chair of the MLA Delegate Assembly Organizing Committee and divisional delegate to the MLA Delegate Assembly, co-chair of the MLA Committee on the Status of Women in the Profession, chair and secretary of the executive committee of the MLA Discussion Group on Arabic Literature and Culture (now Forum), and secretary of the executive committee of the MLA Comparative Literary and Cultural Studies Global Arab and Arab American Forum.