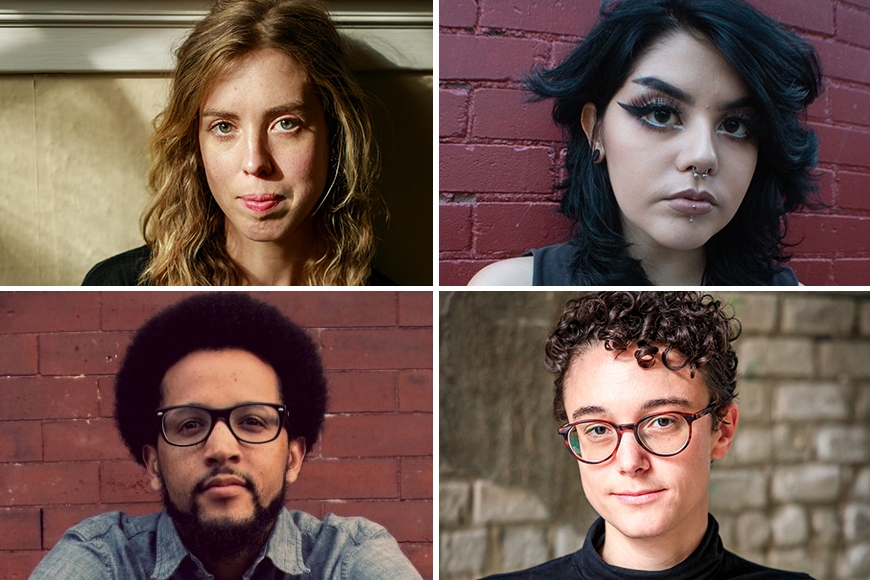 The Walter Nathan Literary Initiatives hosts the annual Creative Writing event honoring debut publications. This year's lineup features two Creative Writing nonfiction alums with their first books: Erica Berry with Wolfish (Flatiron, 2023) and Emily Strasser with Half-Life of a Secret: Reckoning with a Hidden History (University Press of Kentucky, 2023). They are joined by current MFA poets: Nen G. Ramirez with the chapbook All Women Are Born Wailing (Nomadic, 2023) and Chaun Webster with Wail Song: wading in the water at the end of the world (Black Ocean Press, 2023). Join us!

Sponsored by the Department of English and the Creative Writing Program. The event is free and open to the public. No reservations or tickets necessary. ASL interpretation provided. For questions about accessibility services and the venue, please email sutt0063@umn.edu or call 612-626-1528.

Erica Berry is a writer based in her hometown of Portland, Oregon. She has an MFA from the University of Minnesota, where she was a College of Liberal Arts Fellow. Her writing has appeared in The Guardian, The New York Times Magazine, The Yale Review, Outside Magazine, Catapult, The Atlantic, Guernica, and elsewhere. Winner of the Steinberg Essay Prize and the Kurt Brown Prize in Nonfiction, she has received fellowships and funding from the Bread Loaf Writers Conference, Tin House, the Ucross Foundation, the Minnesota State Arts Board, and the Institute for Journalism and Natural Resources. A former Writer-in-Residence with the National Writers Series in Traverse City, Michigan, she is currently a Writer-in-the-Schools with Literary Arts in Portland. Wolfish is her first book.

Nen G. Ramirez is a Chicanx writer from Adrian, Michigan. They are an MFA candidate at the University of Minnesota whose work has appeared in Electric Literature, Split Lip Magazine, Poetry Magazine, and elsewhere. Their chapbook All Women Are Born Wailing won the 2022 Acentos Book Prize and will be published through Nomadic Press in April.

Emily Strasser's first book, Half-Life of a Secret: Reckoning with a Hidden History, a memoir on the intersection of family and national secrets in the nuclear city of Oak Ridge, Tennessee, is forthcoming in April 2023 from the University Press of Kentucky. Her writing has appeared in Catapult, Ploughshares, Guernica, Colorado Review, The Bitter Southerner, The Bulletin of Atomic Scientists, and Gulf Coast, among others, and she was the presenter of the 2020 BBC podcast “The Bomb.” Her essays have been named notable in Best American Essays 2016 and 2017. She was a winner of the 2015 Ploughshares Emerging Writer’s Contest, a 2016 AWP Intro Award, a 2016 Minnesota State Arts Board Artist’s Initiative Grant, and the 2016 W. K. Rose Fellowship from Vassar College. She served as a 2018-19 Olive B. O’Connor Fellow in Creative Writing at Colgate University and a 2019 McKnight Writing Fellow. She received her MFA in nonfiction from the University of Minnesota and lives in Minneapolis.

Chaun Webster is a poet and graphic designer living in Minneapolis whose work is attempting to put pressure on the spatial and temporal limitations of writing, of the english language, as a way to demonstrate its incapacity for describing blackness outside of a regime of death and dying. Webster’s debut book, Gentry!fication: or the scene of the crime, was published by Noemi Press in 2018, and received the 2019 Minnesota Book Award for poetry. Wail Song: wading in the water at the end of the world is forthcoming from Black Ocean Press April 2023.

Masks encouraged. Staff and visitors are reminded to wash hands often, get tested, and stay home when ill or exhibiting symptoms of COVID-19.