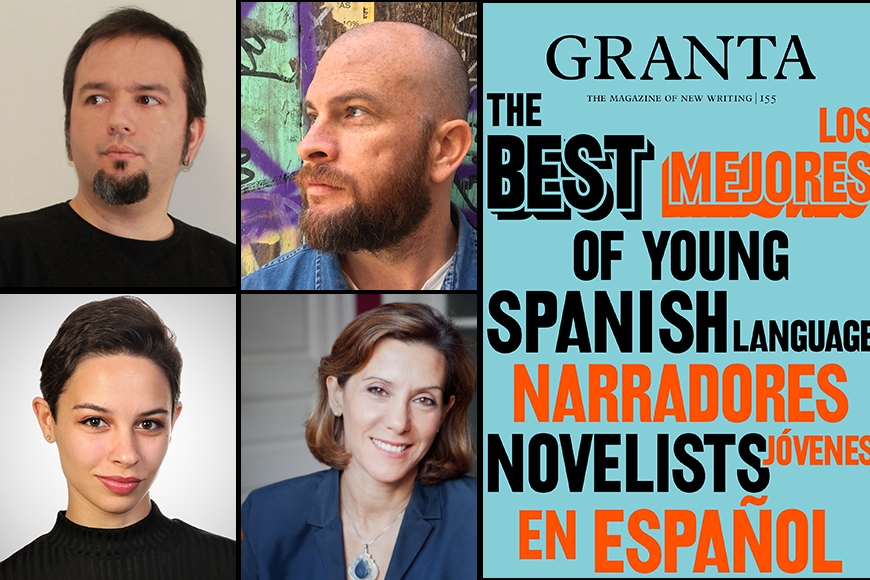 The Creative Writing Program presents a reading and discussion of contemporary Spanish-language literature and translation on the occasion of the publication of Granta's new Best of Young Spanish-Language Novelists. Guest editor Valerie Miles, who co-founded Granta Spain in 2003, will introduce three writers featured in the Granta anthology: David Aliaga (Barcelona), Alejandro Morellón (Mallorca/Madrid), and Irene Reyes-Noguerol (Sevilla). Translator Lizzie Davis will also participate in the discussion. The event is co-presented with the Cultural Office of the Embassy of Spain in Washington, DC and co-sponsored by the Departments of Spanish & Portuguese Studies, Cultural Studies & Comparative Literature, and Chicano & Latino Studies.

This reading and discussion, which will take place in English, is free and open to the public. No reservations or tickets necessary. For questions about accessibility services and the venue, please email sutt0063@umn.edu or call 612-626-1528.

David Aliaga's fiction books include Y no me llamaré más Jacob (2016) and El año nuevo de los árboles (2018), some of whose short stories have been translated into English. Aliaga is a specialist in representation of Jewish identity, both in contemporary literature and in comic books, and in 2018 he co-directed Séfer, the Jewish Book Festival of Barcelona. Last year, the city of Barcelona awarded him with the Montserrat Roig scholarship for creative writing.

Irene Reyes-Noguerol has a BA in Hispanic Philology at the University of Seville and has completed a Creative Writing Workshop at the Camilo José Cela University of Madrid. She is currently working as a Spanish Language and Literature teacher. Reyes-Noguerol has won several awards, both in national and international story contests, and her texts have appeared, so far, in 14 anthologies. At the age of 18 she published her first solo book, Caleidoscopios, followed by De Homero y otros dioses (2018).

Valerie Miles, an American writer, editor, and translator, co-founded Spanish Granta in Barcelona in 2003. She has overseen the Spanish language imprints Emecé and Alfaguara, where she worked with writers like Susan Sontag, Gunter Grass, John Banville, Mario Vargas Llosa, and Javier Marías, and her work of several years arranging Roberto Bolaño’s archive led to the first exhibition of his private papers, Archivo Bolaño, 1977–2003, which she curated with Barcelona’s Center for Contemporary Culture. Her first book is A Thousand Forests in One Acorn, and among her recent translations are Juan Eduardo Cirlot's Dictionary of Symbols for NYRB, and Milena Busquets’ novel This Too Shall Pass, which won a PEN Translates Award and was a finalist for the Dublin Literature Prize. She teaches in the postgraduate programs of Literary Translation and Creative Writing at Barcelona’s Universitat Pompeu Fabra.
Lizzie Davis is senior editor at Coffee House Press and a translator from Spanish and Italian to English. She is passionate about championing writing that subverts, challenges, and broadens narratives available to readers and has worked with writers including Valeria Luiselli, Alia Trabbuco Zerán, Mónica Ojeda, K-Ming Chang, and Aurora Mattia. Among her translations are Juan Cárdenas’s Ornamental (a finalist for the 2021 PEN Translation Prize) and The Devil of the Provinces; Elena Medel’s The Wonders, cotranslated with Thomas Bunstead; and work from Pilar Fraile Amador, Daniela Tarazona, and Aura García-Junco.
Masks encouraged. Staff and visitors are reminded to wash hands often, get tested, and stay home when ill or exhibiting symptoms of COVID-19.
Share on: