The Politics of Loyalty 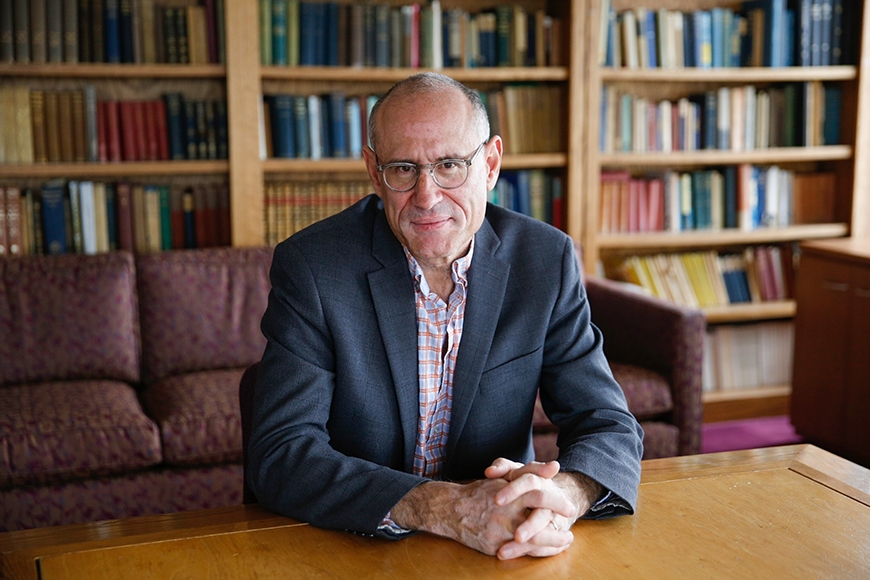 Photo by Lisa Miller
To commemorate our 150th anniversary in 2019, the College of Liberal Arts created a special edition magazine for alumni and friends of the college. View Liberal Arts: The Next 150

In a properly functioning democracy, what is supposed to come first: beliefs about what kinds of government policies would be best for oneself, or for the nation, or for one’s party? Hold that thought for a beat, and think about the concept of “democratic inversion,” as explained by Professor Howard Lavine.

Lavine has a PhD in psychology (U of M, 1994), but his interest in American politics led him to combine the two to specialize in political psychology. He’s director of the U’s Center for the Study of Political Psychology, which focuses on the psychological underpinnings of political behavior. That helps explain his interest in “democratic inversion.”

The idea of “democratic inversion” suggests that it’s working the other way around.

“What many people are doing is identifying with a party first, or perhaps a particular candidate,” Lavine said. “Then they find out what the party, or the candidate’s, preferences are; then change their own minds, to move into alignment with a candidate or partisan position. That’s the ‘inversion.’”

It’s called an “inversion” because it flips the traditional understanding of how one’s voting behavior should be connected to one’s belief about what policies would be best for themselves, or their state, or the nation. “Inversion” suggests that “more and more, people are sticking with the team,“ says Lavine. “Their higher priority is ‘beating’ the other team,” which is the other party.

Lavine refers to Harvard sociologist Robert Putnam’s book Bowling Alone, which highlights the fact that Americans used to participate in more groups, and drew on them for portions of their identities and a feeling of belonging. Membership in those groups added elements to people’s identities without bringing politics into the picture.

But those kinds of associations have declined. Meanwhile, “other social identifications that we have always had, by race or gender or geography, by urban or rural identity, by religiosity including what religious denomination we belong to, these are lining up more and more with the political parties,” Lavine says. “So all of who you are aligns with whether you’re a Democrat or a Republican.

“Instead of thinking, ‘What would I get out of this?’ you’re thinking ‘Where does my group stand, and how does it affect my group versus the standing of other groups?’” Lavine explains. Some of the substantive policy matters that pure democratic theory suggests should work in determining which groups will support which parties are overshadowed by these elements of racial or class identity. “People are less motivated by policy substance than they are with showing their loyalty to the team,” he says.

“It’s not what their concrete personal interests are….It’s less about personal beliefs or personal policy benefits, it’s about the psychological benefits of party loyalty. The idea of self-esteem is related to the idea that my group is right. Social psychologists call this ‘positive distinctiveness.’ My group is different, and better than other groups. So what’s good for my group benefits me, even if doesn’t benefit me directly personally.”