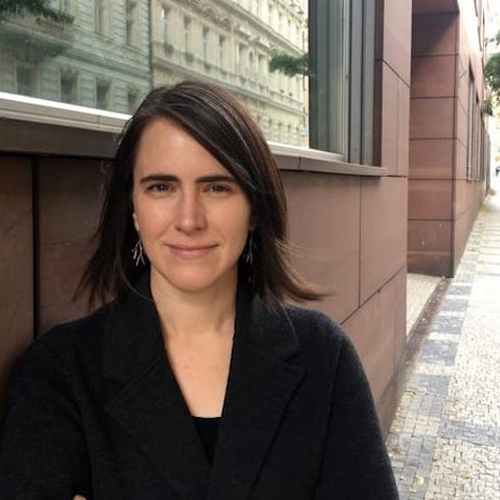 Alice Lovejoy is a media and cultural historian and comparatist whose research examines governmental and institutional media in transnational perspective. Her first book, Army Film and the Avant Garde: Cinema and Experiment in the Czechoslovak Military (Indiana University Press, 2015), was named co-winner of the Modern Language Association’s 2018 Aldo and Jeanne Scaglione Prize for Studies in Slavic Languages and Literatures. It was also awarded Honorable Mention for the 2016 University of Southern California Book Prize in Literary and Cultural Studies (ASEEES) and the 2017 Czechoslovak Studies Association Book Prize, and longlisted for the 2016 Kraszna-Krausz Moving Image Book Award. This book traces the emergence of an experimental film culture in the Czechoslovak Army’s film studio (1929-1969), and includes a DVD of thirteen short films produced by the Czechoslovak Ministry of Defense.

Lovejoy is currently working on two book projects. The first, Militant Chemistry: Film and its Raw Materials, is a history of film stock from the early twentieth century to the mid-1960s. Following film and its components between the United States, Germany, Britain, Eastern Europe, and Francophone African colonies, the book situates the material and its manufacturing within the chemical industry, and considers its entwining with violence of various kinds—military, political, colonial, and environmental. The second project studies the intertwined histories of a series of postwar children’s television and film institutions—among them, Yugoslavia's "Film and Child" Commission, Iran’s Institute for the Intellectual Development of Children and Young Adults (Kanoon), East Germany’s National Center for Children’s Film and Television, Czechoslovakia’s Center for Films for Children and Youth, and UNESCO’s International Centre for Films for Children and Young People. With Mari Pajala, she co-edited Remapping Cold War Media: Institutions, Infrastructures, Translations (Indiana University Press, 2022), and she has published widely on East European, particularly Czech and Slovak, film and literature.

Lovejoy has worked as a film critic, curator, and filmmaker, including as an editor at Film Comment magazine. Her research has been supported by, among others, an American Council of Learned Societies (ACLS) postdoctoral fellowship, a Fulbright-Hays DDRA Fellowship, two Fulbright fellowships, and the University of Minnesota's McKnight-Land Grant Professorship and Talle Faculty Research Award. She is currently a Distinguished Fellow at the Beckman Center for the History of Chemistry and a George A. and Eliza Gardner Howard Foundation Fellow.