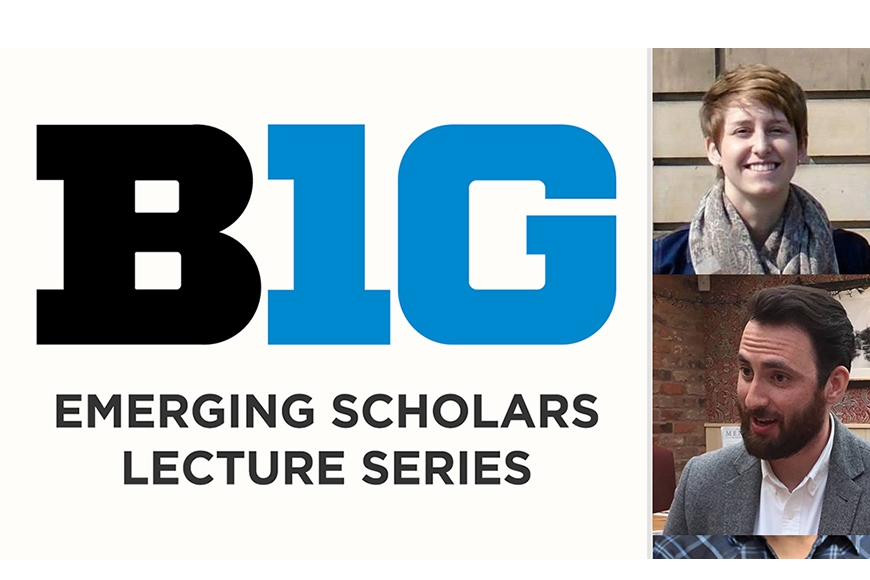 The Big Ten Emerging Scholars lecture series was created in April 2018 during the inaugural annual meeting of the Big Ten English Department Chairs. The purpose of this series is to:

This series was also initiated in order to strengthen a sense of community among the participating English Departments in the Big Ten. The Big Ten Academic Alliance is the nation's preeminent model for effective collaboration among research universities and, other than the Ivy League, the country's most prestigious higher education consortium of top-tier research institutions.

Being selected as one of the annual Big Ten Emerging Scholars is, thus, a significant honor (the selection process is competitive). You can learn more about the series on the Big Ten Departments of English website.

Our department's first Big Ten Emerging Scholar is 2018 PhD graduate Katelin Krieg. Krieg recently completed her PhD at the University of Minnesota, where her dissertation won the Best Arts and Humanities Dissertation Award for 2017-18. Her research brings literary formalism into conversation with philosophy of science to uncover shared representational techniques across the arts and sciences in the Victorian age. She is currently at work on a book manuscript entitled Victorian Forms of Thought: Representation and Perception in Literature, Science, and the Arts. Her Big Ten Emerging Scholars talk, “Victorian Wave Models and the Science of Sonnets,” is scheduled for October 25, at the University of Wisconsin.

As a department, we will host Big Ten Emerging Scholar Michael Gadaleto on October 19. Gadaleto is a Post-Doctoral Teaching Fellow at Pennsylvania State University, where he recently defended his dissertation, "The Island Nation and Its Discontents: Transnationalism in English Renaissance Literature." Focusing on Shakespeare’s France, Spenser’s Ireland, Greville’s Low Countries, and Milton’s Italy, this project reassesses the significance of certain key early modern internationalisms—humanist, Protestant, republican, and poetic—in the literary construction of “England” by exploring how English authors challenged the archetype of the “elect island nation” through transnational and participatory models of nationhood. Portions of this study have appeared as articles in Shakespeare Quarterly and Sidney Journal, and a separate essay on Milton’s Lycidas has recently been published in Studies in Philology.

Talk by Big Ten Emerging Scholar Michael Gadaleto: Noon, October 19, Lind Hall 207A
Gadaleto will analyze Edmund Spenser’s View of the Present State (1598, publ. 1633) alongside the second edition of The Faerie Queene (1596) in order to demonstrate the colonialist poet’s fraught sense of symbiosis and transnational intimacy between his two island “homes”—England and “the saluage Iland” of Ireland. For Spenser, the self-declared bard of a newly emergent English nationhood, these two interconnected realms nevertheless share a “mingled” history of conquest and redefinition that begins to upend his earlier sense of one island’s innate superiority over the other. In contrast to the long-standing critical characterization of the Spenser of the late 1590s as disillusioned, disengaged, and isolated—an interpretation supposedly illustrated by Book V of The Faerie Queene—Gadaleto reveals him to be a discontented but invigorated figure of renewed engagement, one who reimagines and reshapes his national epic, and his own self-consciously mingled poetic identity, in strikingly transnational terms. Spenser thus appears as a poet who seeks to wed the erotic allegory so present in the first three books of The Faerie Queene to a more historically and transnationally engaged project of poetic worldmaking in the second edition—a project that finds the savage isle occupying an ever more central, and intimate, role in his vision of an expanded national identity.

Talk by Big Ten Emerging Scholar Katelin Krieg (PhD 2018): 4 pm, October 25, University of Wisconsin, Madison
At the close of the Victorian age, waves were in the air—literally and figuratively. Physicists had discovered that natural phenomena like light, electricity, and magnetism traveled through space in waves, while psychologists used these discoveries to posit that thoughts, too, had a wave-like structure. But could these cutting-edge scientific theories reframe a centuries-old debate about poetic form? In this talk, Krieg shows how late-Victorian critics drew on advances in contemporary science to develop new theories about the ideal form of the sonnet. Abandoning the terms of debate which pitted the original, Italian form against its later English development, these critics suggested that the ideal sonnet form mimicked the wave-like structure of human thought. More than a point of historical interest, however, the Victorians’ surprising use of science to solve literary problems can shed new light on 21st-century debates concerning literary critical methodology and the relationship between humanistic and scientific disciplines.