Feast of Love for Charles Baxter 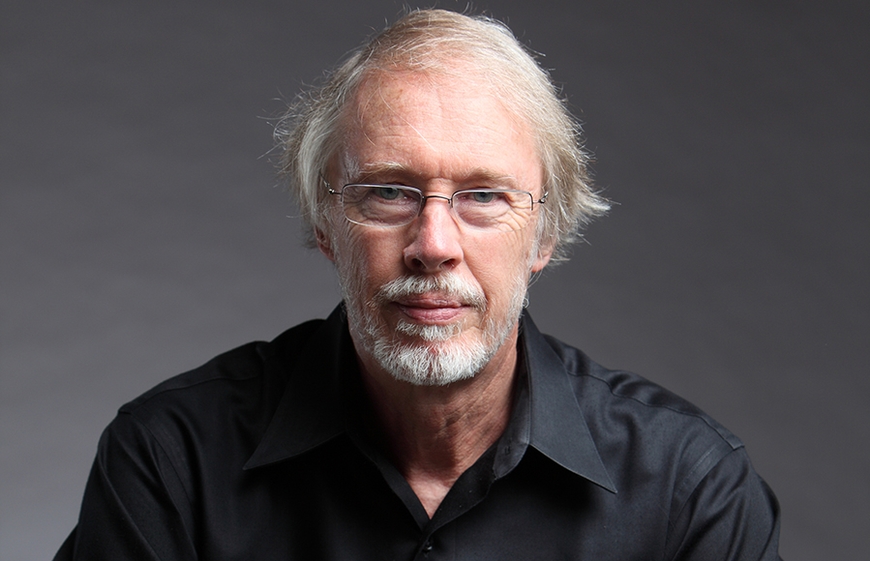 What will retiring Edelstein-Keller Professor in Creative Writing Charles Baxter miss most about teaching, after 18 years at the University? “Passing on my enthusiasm about a novel, a poem, or a story, to others,” he says, “and showing them, to the best of my abilities, how it was done.”

Traditional creative writing workshops have come under fire for the way they endorse—or even make mandatory—the teacher’s idea of what makes a good story. “In those days the instructor was there,” describes Baxter, “to tell the student what was right and what was wrong with the student’s work.”

Baxter on a memorable
classroom moment:
"Novelist Denis Johnson visited
one of my classes not too long
before his death. With a wry
expression, he told us, 'Most
books fail.' He told us that some
stories can be written in minutes,
while others will take years to
complete. He was modest but
authoritative. He talked about
the soul as if he knew exactly
what it was."

The workshops of this award-winning novelist and story writer have instead been, legendarily, a space of creative exploration. Students receive what MFA alum Andrea Uptmor celebrates as “the Charlie treatment”: “a description of what your story was about that ends up more eloquent and true than your own sentences.”

Continues Uptmor: “Charlie talks about his students’ characters as if their lives were of great personal consequence to him. He treats each draft as if it is something in The Paris Review, something golden, with guts, worthy of analysis. There was never empty praise, but his whole-hearted attention showed a kind of love that we hope to inspire in all our readers.”

Focusing the class on the “formal properties” of a story, Baxter asks students to describe its world: “What techniques have been employed to shape this particular story? I talk about request moments, one-way gates, acute vs. chronic tension, inventories and undoings, dramatic imagery, selective listening in dialogue, sparkplug characters, plot reversals—the whole bag of tools and tricks,” says Baxter. “And then: are these techniques working well, or at cross-purposes, to dramatize the story's narrative?”

If a writer is having a problem with a story, there is that classic Baxter response: Make it a problem in the story. If a character is talkative and boring, have other characters notice their tediousness. Listen to the problem—it has a message for you.

“You can end a session like that without knowing whether the instructor liked the work or not,” says Baxter, an absence that diminishes all sorts of workshop ills.

“It’s no exaggeration to say that Charlie’s fiction seminar taught me how to read,” MFA alum Isaac Butler, playwright and co-editor of The World Only Spins Forward: The Ascent of Angels in America, wrote on Twitter. “I'm so lucky to have been able to study with him.”

Alum Edward McPherson, author of The History of the Future: American Essays, agrees. “Charlie is the most generous, insightful, and exacting writer and reader. I cannot tell you how often I find myself wondering—whether I’m writing or teaching—What would Charlie do?”

“Charlie is the master!” comments alum Anessa Ibrahim, now an English PhD candidate and Provost Fellow at the University of Cincinnati. “My professors and colleagues at UC are always citing his stories and craft essays—I probably heard his name come up every two to three weeks in class, and each time, I’d have to fight the urge to say, ‘I know him! He’s the master!’”

A reading recommendation:
"Antonio Muñoz Molina's Like a
Fading Shadow, a beautifully
written and somewhat dreamlike
novel about Lisbon, and how
James Earl Ray hid out there
after assassinating Martin
Luther King, Jr. It may be the
best novel about an American
ever written in Spanish."

Helping to put Minnesota MFA on the map

In addition to teaching, Baxter has graciously served students and alums as a mentor and a bridge to the publishing community, where he is esteemed as both writer and editor. His seventh story collection, There’s Something I Want You to Do (Pantheon, 2015), won the Minnesota Book Award for fiction. He is the author of five novels, including National Book Award finalist The Feast of Love (2000)—made into a movie in 2007. Among Baxter's many writing awards are the Award of Merit in the Short Story and the Award in Literature, both from the American Academy of Arts and Letters, and the Rea Award in the Short Story.

Baxter is equally acclaimed for his essays on the writing craft: the classic Burning Down the House: Essays on Fiction, as well as The Art of Subtext: Beyond Plot, which won the 2008 Minnesota Book Award for General Nonfiction. Baxter was the series editor for The Art of ... series of books with Graywolf Press, and editor of Bringing the Devil to His Knees: The Craft of Fiction and the Writing Life and other volumes.

“Students came from all over the world to study with Charlie because of his writing, because of ideas about craft, because of his generosity as a teacher,” says Associate Professor Kim Todd, Director of the Creative Writing Program. “And while they were here, they took his classes multiple times because of the possibilities he saw in their stories and in the art form they’d chosen. His presence helped put Minnesota’s MFA program on the literary map.”

Baxter’s sterling reputation and kindness has also drawn colleagues to Minnesota. “When I interviewed at Minnesota,” notes novelist and Assistant Professor V. V. Ganeshananthan, “Charlie was the one who drove me around the polar vortexed Twin Cities and talked about how much he loved it here. I can’t imagine a better—and warmer!—welcome. I think it’s one of the best things that’s ever happened to me as a teacher and writer, to be in Charlie’s brilliant and unfailingly generous presence these past five years.”

On his annual Hunger Benefit:
"About 30 years ago, a group called
Share Our Strength started up a
movement to give benefit readings
for hunger relief all over the country.
I headed it up for a couple of years.
But eventually the movement petered
out. So I started a reading series here
to benefit Second Harvest Heartland.
By the way, the problem of hunger
has not gone away; lately, it's gotten
much worse."

Baxter has worked alongside novelist Professor Julie Schumacher as fiction writing specialists since he joined the Creative Writing Program. Says Schumacher, “At the end of Charlotte’s Web (still one of my favorite novels), Wilbur the pig mourns the absence of Charlotte the spider—whose well-chosen words literally saved Wilbur’s life. Wilbur says, ‘It is not often that someone comes along who is a true friend and a good writer. Charlotte was both.’ For the past 18 years at the University of Minnesota, Charles Baxter has been both. He has been an exemplary and inspiring teacher, colleague, mentor, and writer. We are so fortunate to have counted him among our faculty and will surely continue to feel the benefit of his influence in the years to come.”

What are Professor Baxter’s goals in those upcoming years? He will publish his sixth novel, The Sun Collective, next fall with Pantheon/Random House. Beyond that, he says, “I want to put together a book of essays about the life of literature. I want to read the books I never got to, and to re-read the books I've loved.”

For Baxter, writing and reading literature is a spiritual practice. In this lovely message to colleagues and students, he concludes: “Stories are the tribute we pay to our experiences and to the world of the holy spirit in literature, which we are doing our best to write—to tell others what it was like to be alive.”

While a special Benefit for Hunger event celebrating Baxter has been postponed, consider making a donation in honor of Baxter to Second Harvest Heartland or another food shelf.