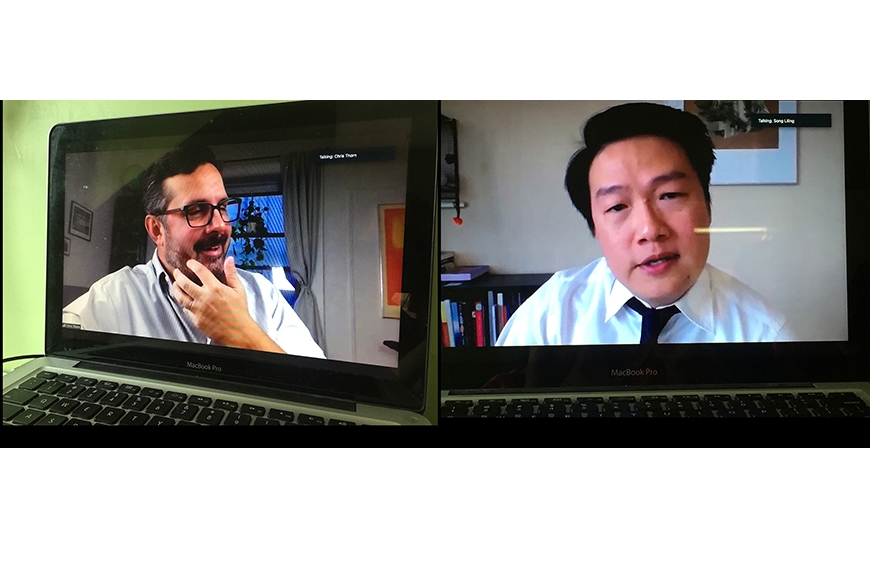 The students in ENGL 3301 "Asian America through Arts and Culture" gather, their faces framed in small boxes across the screen, listening to Professor Josephine Lee set up their analysis of David Henry Hwang’s Tony Award-winning play M. Butterfly. Next, Lee, beaming from her home study, announces two special guests: actors Eric Sharp and Chris Thorn are on the Zoom meeting to present play excerpts live for this private audience of 30. A moment of silence (with screen sharing adjustment), then: theater magic!

The pandemic has devastated the performing arts community in Minnesota, with theaters dark since March. In the past, University BFA students have visited English classes to practice Shakespeare performances; other class visitors typically receive an honorarium from a department fund. What if, English Chair Andrew Elfenbein asked last summer, the department paid professional actors to do readings for online English classes, to help out in some small way?

He knew just where to turn: Mixed Blood Theatre, a pioneering institution in the U’s West Bank community, has hosted a dedicated internship for English majors for several years. Their mission: to address “injustices, inequities, and cultural collisions, providing a voice for the unheard—on stage, in the workplace, in the company’s own Cedar Riverside neighborhood and beyond.”

With Mixed Blood’s assistance, the department matched actors with interested instructors for 30-minute visits, to include a reading/performance and questions and comments with students.

“The tone adopted by each
character is brought alive!”
- English major Adele Loh

“This is a really exciting opportunity for everybody,” said Elfenbein, “not to mention a way to use Zoom to offer something that might be harder to do in person.”

For the M. Butterfly reading, Minneapolis actor and playwright Sharp played Chinese opera singer Song Liling, a man who pretended to be a woman over a 20-year affair with a French civil servant in China, René Gallimard. Sharp understudied for the role during the Guthrie Theater production, and his Song here sprang off the page: arch arrogance against a French judge (Thorn); steely wit shading to vulnerability in a riveting Act III confrontation with Thorn’s Gallimard, himself shifting from softness to strength.

Afterward, the students jumped in with compliments. “The tone adopted by each character is brought alive!” commented English major Adele Loh. “The haughtiness and the sass become obvious. Hearing instead of just reading really made the experience more lively and compelling."

The undergrads quickly took off into a discussion of gender role stereotypes, imagination, power relations, and the performance of nudity onstage. Another Guthrie vet who has acted on and off-Broadway in New York, Thorn noted the students’ thoughtful comments, explaining that usually actors “don’t play ideas” but consider instead “what does the character want from this person?” Sharp revealed that during the Guthrie run of M. Butterfly (in which he played Kurogo), some buyers of scalped tickets believed they were showing up for a performance of the Puccini opera Madame Butterfly, a decidedly different version of the story.

In another visit during fall semester, veteran Twin Cities actors Dustin Bronson and Isabella LaBlanc dropped into Professor Katherine Scheil’s “Intro to Shakespeare” course, enacting the wooing scene from Taming of the Shrew for 70 undergraduates.

"Wow!" exclaimed student Evan Modec afterward. "That was one of the most fun lectures I've had in my four years at the U of M."

Undergraduate Hattie Hodes shared that enthusiasm. "I loved getting to hear professional actors explore their relationship with Shakespeare and his text. Some questions were asked that I feel all people should be discussing in the theatre world right now. For example, it was useful to me to hear an Indigenous woman's perspective on Shakespeare and how initially she viewed the work as 'not for her.'"

"The performance changed my perspective on Shakespeare," added student Jada Lilliboe, "showing me how these words can really come alive when performed."

As for the actors, prevented from treading the boards for so many months: "It was a joy," Bronson said, "to get to share our love for Shakespeare with such an engaged group of young people."

Ten further class visits took place in the fall, with readings ranging from Samuel Beckett's Waiting for Godot to students' own words, cold read by actors in Creative Writing's "Screenwriting" class. Mixed Blood and English are encoring the collaboration this spring with still more visits.