Publication and award updates from our creative writing students and alums 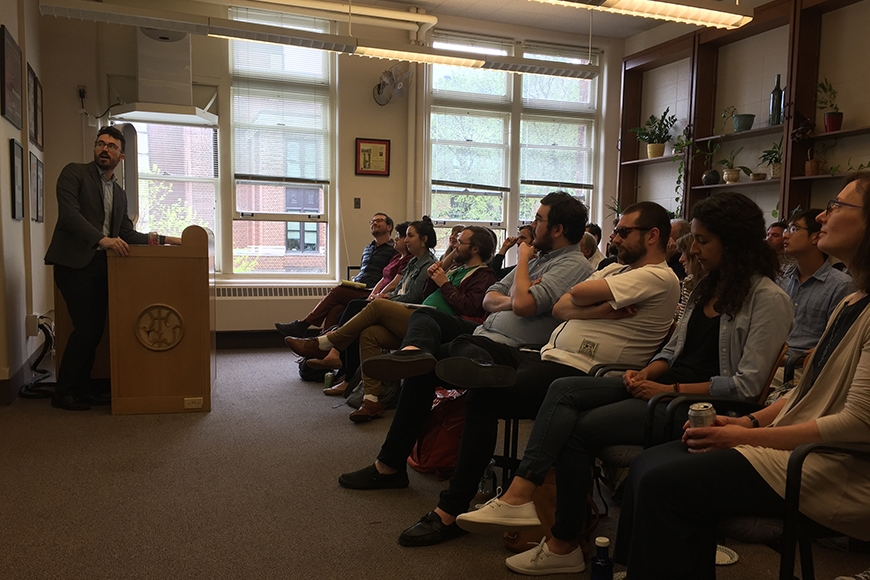 The Creative Writing Program this spring marked 21 years of the MFA degree in Creative Writing with a fest at the Weisman Art Museum. To celebrate, we created lists of all the books published by MFA alums. Let us know if we missed yours! (Email sutt0063@umn.edu)

Erica Berry won a 2018 Minnesota State Arts Board Artist Initiative grant of $10,000 and the Gesell Award for Excellence in Creative Writing, nonfiction. She also received an AWP Intro Journals Award for her essay “On Worry”; it will appear in The Colorado Review. She was awarded an AWP Kurt Brown Prize and The Southeast Review’s Narrative Nonfiction Prize for her essay “Crywolf,” which appeared in the spring 2018 print edition. She published “Heart of the Matter: Eat, Think, Live” in the University of Minnesota Alumni Association Minnesota Alumni magazine and the longform essay “Beasts Among Us” in True Story.

Will Harris published the pieces “Not the Backward-Glancing Comrade” and "Obscurity of Purpose, Immediacy of Experience" at n+1.

Anessa Ibrahim won a 2018 Minnesota State Arts Board Artist Initiative grant of $10,000 and was the co-winner of the Gesell Award for Excellence in Creative Writing, fiction. She published her story “Ray Charles Never Lost Anything Important” in American Short Fiction.

Miriam Karraker, in collaboration with Qxiz Editions, in October presented Works on Paper or Without, a project for her residency at The White Page. She reviewed Renee Gladman’s Prose Architectures for The Kenyon Review. She was a co-winner of the James Wright Prize in Poetry and received an honorable mention in the Loft’s McKnight Fellowship for Poetry. And she published “Six Events” (curated by Carrie Lorig) on Floromancy.

May Lee-Yang has been awarded a $25,000 Playwright Center McKnight Fellowship. This August, Theater Mu is premiering her play The Korean Drama Addict's Guide to Losing Your Virginity. The show runs August 3-19 at Park Square Theater. More details here. She was awarded the Marcella De Bourg summer scholarship for a project about Hmong women and domestic violence and was a co-winner of the James Wright Prize in Poetry. Her TEDx talk “It’s okay not to be the center of the Universe” is up on YouTube. She was also a Loft Spoken Word Immersion Fellow. She led a Poetry in the Neighborhood workshop at the Sun Ray Library for St. Paul Public Libraries. The resulting poems were formed into the stanzas of a larger poem about St. Paul and celebrated with a reading and performance April 11 at Arlington Hills Community Center.

Amanda Minoff was the co-winner of the Gesell Award for Excellence in Creative Writing, fiction.

Chelli Riddiough interns this summer with Children of Incarcerated Caregivers. She will be developing a writing program for children whose parents are incarcerated or detained in connection with immigration proceedings.

Kathryn Savage was a co-winner of the James Wright Prize in Poetry and won a Graduate Research Partnership Program (GRPP) award. She placed third in the graduate student division of the ArtWords Writing Competition.

Alexis Zanghi published the essay “Making Rent and Rent-Making” in Jacobin. She reviewed Amanda Huron's Carving Out the Commons on Jacobin.

Maureen Aitken (MFA 1997) won the Nilsen Prize with her short-fiction collection; it will be published by Southeast Missouri Press in 2018. Her story “You Would Live” was recently published in The Emerson Review.

D. Allen (MFA 2017) will publish their first hybrid collection, A Bony Framework for the Tangible Universe, with The Operating System in 2019. Allen won a 2018 Minnesota State Arts Board Artist Initiative grant of $10,000 and received a Loft Emerging Writer grant.

Marge Barrett (MFA 2005) published the poem “To My Brother Tom” in the 2017 Poetry Contest issue of Passager; her Bookshelf essay about the art of memory—“How to write about a day in a life?”—appeared in the July Minnesota Women’s Press magazine.

Victoria Blanco (MFA 2013) was a Loft Mentor Series fellow for 2017-18. She published the essay “Tío Beto” in Bat City Review; she also published an essay in Catapult.

Emily Bright (MFA 2008) recently wrote and produced two radio stories for KFAI's MinneCulture: a feature on National Book Award Finalist poet Danez Smith and a feature on what keeps Graywolf Press publisher Fiona McCrae reading past page one. Her poem "Francis" appeared in the inaugural issue of The Watchung Review.

Isaac Butler (MFA 2013) co-authored The World Only Spins Forward: The Ascent of Angels in America (Bloomsbury). He wrote a profile of Nathan Lane for New York Magazine and an essay about the late Sam Shepard for Slate. He has a podcast about Shakespeare and politics at Slate called Lend Me Your Ears.

Jonathan Damery (MFA 2017) launched The Carex Series, which offers literary events that focus on interactions between people and the non-human environment.

Tara DaPra (MFA 2009) interviewed Kristen Radtke for UntitledTown and also reviewed Radtke’s book. She wrote about the University of Wisconsin system merger for Inside HigherEd.

Libby Edelson (MFA 2009), a senior editor at HarperCollins, will edit Gemma Hartley’s new book based on her article about emotional labor in Harper’s.

Jonathan Escoffery (MFA 2014) was nominated for a Pushcart Prize for his story “In Flux,” which appeared in Passages North.

Amanda Fields (MFA 2005) received So to Speak's 2018 Spring Nonfiction Contest Honorable Mention for her essay, "Pulled into Brightness." It will be published in the summer contest issue. Her story “Buffalo” won third place in (b)OINK magazine’s flash fiction contest.

Jennifer Fossenbell (MFA 2014) published two new poems in Posit and three poems in where is the river. An excerpt of her long poem "BODY OF ( AN ECHO ( A RED REVERBERATION" was recently translated into Chinese and included in an exhibit of socially engaged poetry called "Bad Code" in Beijing. She accepted an offer for a full-time editing position with the Chinese state-run news media site China.org.cn.

Sally Franson (MFA 2013) published her debut novel A Lady’s Guide to Selling Out with Random House.

Julie Gard (MFA 2000) published the prose poetry collection Scrap: On Louise Nevelson with Ravenna Press as part of their Pocket Book Series. Her poem “Ashland, Kentucky” was published in Solstice.

Kathleen Glasgow (MFA 2002) was a finalist for the Amelia Elizabeth Walden Book Award and was nominated for a CILIP Carnegie Medal for 2018 for her debut young adult novel Girl in Pieces. The book was Target’s Book Club selection for April; Target issued a new paperback edition with bonus features.

Kate Hopper (MFA 2005) published the essay “A Different Sky” in The Fourth River.

Su Hwang (MFA 2016) will publish her debut poetry collection Bodego with Milkweed Editions in 2019. She was a finalist for Milkweed’s $10,000 Lindquist & Vennum Poetry Prize. She won a 2018 Minnesota State Arts Board Artist Initiative grant of $10,000 and received an honorable mention in the Loft’s McKnight Fellowship for Poetry. Hwang was awarded a Coffee House Press “In the Stacks” residency at Dickinson House in Belgium (Dickinson House was founded by another program alum, Eireann Lorsung.) She placed a poem at Illuminate South Loop.

Carla-Elaine Johnson (MFA 2007) accepted a full-time unlimited position with Saint Paul College in the English Department, where she has taught for the past four years.

Elizabeth Foy Larsen (MFA 2002) published 111 Places in the Twin Cities that You Must Not Miss (Emons Publishers). She wrote about the Pillsbury Hall renovation for English for the University’s Alumni Association magazine.

Laurie Lindeen (MFA 2004) published the essay “Johnny Goes to College” in The New York Times. She also published “Luck Be a Lady: X, Garbage, and Blondie in Concert” on Please Kill Me.

Mardith Louisell (MA 1999) published the story “Hawaii” at Solstice and “The Long Shower” at Persimmon Tree.

Michelle McNamara (MFA 1997) was working on a book about the Golden State Killer when she died in 2016. Her posthumously published book I’ll Be Gone in the Dark has been a New York Times Bestseller since its publication.

Edward McPherson (MFA 2011) won the PEN Southwest Book Award for Nonfiction for his essay collection The History of the Future.

Elizabeth O’Brien (MFA 2015) published the chapbook A Secret History of World Wide Outage with Diode Editions. She also published a piece on “Me and Julio Down by the Schoolyard” at The Rumpus and the essay “Authorial Custody in Poetry” in the September 2017 issue of The Writer’s Chronicle.

Laura Owen (MFA 2009) was a semifinalist for an Academy Nicholl Screenwriting Fellowship.

Scott Parker (MFA 2014) edited Conversations with Joan Didion, which is due out next month from University Press of Mississippi. His book, A Way Home: Oregon Stories, is due out in July from Kelson Books.

Adriane Quinlan (MFA 2013) published a literary history of the lost umbrella in The Believer.

Emily Strasser (MFA 2016) has an essay up on Catapult: “Bombed Without a Bang: The Nuclear Crisis We’re Already Living.”

Ryo Yamaguchi (MFA 2008) interviewed alumnus Kevin O’Rourke about his essay collection As If Seen at an Angle and former English department staff person Caitlin Bailey about her Lindquist & Vennum-winning collection Solve for Desire for Michigan Quarterly Review. He also published a poem at Blackbird.

Shana Youngdahl (MFA 2006) will publish her debut young adult novel As Many Nows as I Can Get with Dial in 2020.

Jason Zencka (MFA 2015) published a new story in Image Journal. His story “Catacombs” was published in the 2018 Pushcart Prize Anthology.

Jasmin Ziegler (MFA 2011) was selected to attend the Poetry Foundation’s Summer Poetry Teachers’ Institute in Chicago in July. She teaches at Anoka-Ramsey Community College. She was also a Loft Mentor Series fellow for 2017-18.