Award and publication updates from MFA students and alums 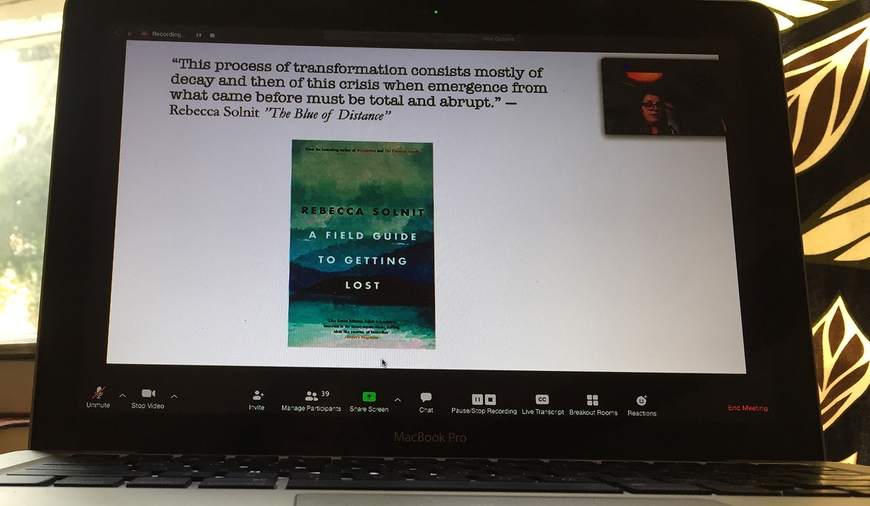 Antonia Angress received the Winifred Fiction Fellowship for summer 2020 as well as the Audrey Christensen Literary Acquisition Prize. Angress published a flash essay in Lunch Ticket and a short story in Arts & Letters which was nominated by the magazine to appear in the anthology New Stories from the Midwest 2020.

Clare Boerigter won the 2020 Marcella DeBourg Fellowship for her memoir about a young woman working as a firefighter for the Forest Service.

Rebecca Brill won the Gesell Award for Excellence in Creative Writing for literary nonfiction. Brill’s essay "On Gurning" was awarded an AWP Intro Journals Award and will be published in Colorado Review.

Tarik Dobbs received a Scribes for Human Rights Fellowship and was named winner of Breakwater Review’s 2020 Peseroff Prize in poetry for the poem “Anti-Drone Niqab Made From Silver.” Palette Poetry announced Dobbs as the second place winner for the 2020 Spotlight Award for the poem “X-Ray Diptych in Ben Gurion Airport,” published April 29. Dobbs placed poems in Passages North and AGNI Magazine.

Tess Fahlgren was awarded a Gesell Anderson Center summer residency in Red Wing, MN, as well as a GRPP Award for summer 2020. Fahlgren’s essay "Honesty is Bragging When You're Me" was published by Joyland Magazine.

Said Farah received an EDI Creative Award for summer 2020. Farah’s essay “The Color of My Skin Is Bleak, Not to Be Confused with Black” was published in Bluntly Magazine. Rigorous Magazine published the poem “mango mush.”

Merle Geode read at Moon Palace Books in December as part of a “Readings with Queer Asian Writers” event.

torrin greathouse won the $10,000 2020 Ballard Spahr Prize for Poetry for the poetry collection Wound from the Mouth of a Wound, selected by Aimee Nezhukumatathil, which includes publication by Milkweed Editions December 2020. greathouse was selected by Sam Sax as the University of Arizona Poetry Center Summer Fellow and by Ocean Vuong for Redivider's Beacon Street Prize in Poetry, and was also selected as a 2020 Zoeglossia Fellow. The Poetry Foundation named greathouse the winner of the J. Howard and Barbara M.J. Wood Prize. She was awarded a $2,500 grant for her manuscript-in-progress by the Effing Foundation for Sex-Positivity. Poems were published in Ploughshares, Poetry Magazine, Kenyon Review, and Tupelo Quarterly, and her poem "Hapnophobia or the Fear of Being Touched" was selected as a finalist for the 2020 Pushcart Prize Anthology.

Ember Johnson was awarded a 2020 Minnesota State Arts Board Artist Initiative Grant of $10,000.

Emma Kaiser’s essay, "Beauty and the Bees," has been accepted by River Teeth and will appear in the autumn 2020 issue.

May Lee-Yang won the Gesell Award for Excellence in Creative Writing for poetry. Lee-Yang co-founded F.A.W.K. (Funny Asian Women Kollective), who performed a "Super Show" at the Ordway on October 26. Lee-Yang was also one of the winners of Public Art St. Paul’s sidewalk poetry contest.

Mariela Lemus’ poem “Walls, or the Construction of the Family” won the Academy of American Poets James Wright Prize.

Amanda Minoff placed the essay “The Women Who Write Themselves Out of the Story” at Electric Lit.

Sruthi Narayanan won the Gesell Award for Excellence in Creative Writing for fiction as well as a Gesell Anderson Center summer residency in Red Wing, MN.

Liana Roux was awarded the Pink Poetry Fellowship for summer 2020.

Asha Thanki’s short story, "Somewhere in Bombay, a Fog Descends" won the Arkansas International Emerging Writers Prize ($1,000 and publication), selected by Sigrid Nunez. Thanki published a short essay, “kācabō,” in Platypus Press’ Wildness and an essay on outer space and chosen paths in The Common. Thanki was named a 2020 Kundiman Fellow and received a Scribes for Human Rights Fellowship for summer 2020.

Maureen Aitken’s debut novel The Patron Saint of Lost Girls won the 2018 Foreword INDIE award and was included on the “Kirkus Indie Best Books of 2019” list.

Mike Alberti was awarded the Katherine Anne Porter Prize from the University of North Texas for his short story collection Some People Let You Down, which will be published in November.

D. Allen was a finalist for the 2020 Minnesota Book Award in Poetry for the collection A Bony Framework for the Tangible Universe (The Operating System).

Kendra Atleework’s memoir Miracle Country will be published in July with Algonquin Books. Atleework toured an abandoned mine and wrote about it for the Bishop Chamber of Commerce and The Inyo Register.

Swati Avasthi was awarded a 2020 Minnesota State Arts Board Artist Initiative Grant of $10,000.

Erica Berry’s piece “The Everyday Madness of Teaching Under Lockdown in America” was published at Literary Hub.

Victoria Blanco’s book Out of the Sierra will be published by Coffee House Press in 2021. Blanco’s essay on the traditional dresses of Raramuri women of Chihuahua, Mexico, appeared in The New York Times; Blanco also published "Kids & Covid" with Pollen Midwest, "Up From the Desert" with Texas Observer, and "Quiet Resistance and Acts of Hope on the US-Mexico Border" with Literary Hub.

Isaac Butler is working on an oral history of Method acting for Bloomsbury. Butler published “The King Turns Shakespeare’s Henriad into the Tragedy of the Obama Years” and “The Disappearance of John M. Ford” for Slate. Butler is one of the new hosts of Slate's long-running Working podcast.

Carolyn Byrne’s short story “In the Dollhouse Underground” was a runner-up for the Boston Review’s 2019 Aura Estrada Short Story Contest.

Jennine Capó Crucet is a Loft Mentor this year in fiction (joining Professor Douglas Kearney). Crucet’s essay collection My Time Among the Whites was published by McMillan in 2019.

Matthew Duffus’ debut novel Swapping Purples for Yellows was published in 2019. He also published his debut poetry chapbook, Problems of the Soul and Otherwise, with Finishing Line Press.

Jonathan Escoffery received an NEA Creative Writing Fellowship for 2020, as well as the Plimpton Prize for his story “Under the Ackee Tree.” The same story contributed to Paris Review’s ASME1963 Award for Fiction this year.

Amanda Fields is one of the Writers-In-Residence at the Conference on Community Writing in Philadelphia. The essay anthology, My Caesarean: Twenty-One Mothers on the C-Section Experience and After, edited by Fields and MFA alum Rachel Moritz, won a Silver in the Essays category of the Foreword INDIES awards.

Julie Gard's prose poem "Viral Two-Step" was published in Unbroken and is also featured in the Duluth Reads video/audio series.

M. J. Gette published the poetry collection Majority Reef with Inside the Castle.

Kathleen Glasgow’s 2016 debut novel Girl in Pieces was named one of Goodreads’ “Most Popular New YA Voices of the Past Three Years.”

Roy Guzmán is an NEA Fellow for Literature. Guzmán’s debut poetry collection Catrachos was published by Graywolf Press and has been covered in various media, including the Oprah Magazine list, “These LGBTQ Books Will Change Your Literary Landscape in 2020.” Guzmán read as part of this year's Loft Literary Center Wordplay festival.

Joe Harris' debut collection of short stories, The Slow Death, will be published in fall 2020 by Wayne State University Press as part of the Made in Michigan Writer’s Series. Moon City Review nominated Harris’ story “You’re in the Wrong Place” for a Pushcart Prize.

Katie Hae Leo is a recipient of a Loft Literary Center “Mirrors & Windows” fellowship for 2019-20.

Anessa Ibrahim was awarded a 2020 Minnesota State Arts Board Artist Initiative Grant of $10,000.

Miriam Karraker wrote poems for Hair and Nails Gallery's most recent publication, created a poetic companion/booklet to Isa Gagarin's show Color in Motu at Forage Modern Workshop, and had a poem in the catalog for the Queer Forms exhibit at the U's Katherine E. Nash Gallery. Coffee House Press In the Stacks resident this year, Karraker also performed at the FD13 Residency's program launch and in interactive activities on Nicollet Mall in January.

Molly Sutton Kiefer was featured in the essay “Lines of Work: Five Poets on their Day Jobs” on the Poetry Foundation’s website. Tinderbox Editions, founded by Kiefer, will publish Heid E. Erdrich's next book, Verb Animate, in 2020.

Janna Knittel’s poem “The Fox” appears on Up North Lit.

Eireann Lorsung was interviewed in Rain Taxi’s fall online edition. Lorsung’s poetry collection The Century will be published by Milkweed Editions in October.

Gayla Marty's essay "Now You're Cooking With Gas" won the Torch Prize for Creative Nonfiction from The North American Review.

Ben Meyerson’s chapbook An Ecology of the Void was published by above/ground press.

Kevin O’Rourke published two essays in Michigan Quarterly Review, wrote “Looking at Ledes (in Critical Writing)” for Hugo House, and reviewed Timothy Donnelly’s book The Problem of the Many for LA Review of Books.

Scott Parker’s book-length essay Being on the Oregon Coast will be published next year. Parker is publishing a series of interviews with writers online at Rain Taxi.

Amy Shearn will publish a third novel, Unseen City, in September with Red Hen Press. She wrote “The Secret Glee of Shy People and Plan-Cancelers in Coronatimes,” for Forge by Medium.

Gao Yer Gonza Vang’s essay was included in the anthology Staring Down the Tiger, about Hmong American women. Vang was awarded a 2020 Minnesota State Arts Board Artist Initiative Grant of $10,000.

Ryo Yamaguchi published the poem “Thin Continuance” at Poetry Northwest. Yamaguchi is blog posting about a year-long trip around the US in 2020.

Shana Youngdahl’s debut YA novel As Many Nows as I Can Get received a starred review from Kirkus, and Seventeen Magazine named it one of “The Best YA Books of 2019 That Are Perfect to Read Before Summer Ends.”

Alexis Zanghi was awarded a 2020 Minnesota State Arts Board Artist Initiative Grant of $9,650.

Jason Zencka published the story “Other People” in Juxtaprose and the story “Junior” in Story Quarterly.

Send your updates to sutt0063@umn.edu!