Regents Professor internationally renowned for work on metrics in poetry 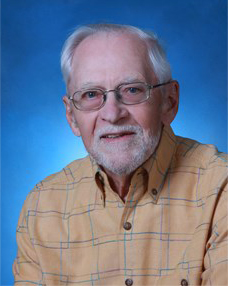 Wright was both a poet and a scholar of poetry, and he was especially interested in metrics, the pattern of the beats. His nephew Raymond Weaver reported that during his hospitalization, Wright enjoyed having Shakespeare read to him, and was quick to improve metrical emphasis.

Share a memory or story
of Professor Wright here

Wright twice won the national Modern Language Association prize for best published scholarly essay in the journal PMLA: in 1974 for “The Lyric Present: Simple Present Verbs in English Poems” and in 1981 for “Hendiadys and Hamlet,” a widely shared essay on Shakespeare’s use of that figure of speech. His studies of Shakespeare and other poets were gathered in Shakespeare’s Metrical Art (1988) and Hearing the Measures: Shakespearean and Other Inflections (2001).

“Ted composed a verse epitaph for himself,” points out Professor Emeritus Calvin Kendall, “which he included in his collected poems, Aimless Life:

He loved his wife, his dog, and poetry.
Sprinkle his ashes ceremoniously.
Thanks, friends who’ve shared this golden hitch with me.

“Just this once,” Kendall goes on, “I’d quarrel with his stress (rhetorical, not metrical!). We are the ones who owe thanks.”

In the 1970s, when both professors were researching in Europe, Wright and his wife Jerry stopped by Aix-en-Provence in Southern France to visit the Kendalls—with an itinerary. “Though trained as a medievalist, I had never before been to Europe to take in the visible remains of medieval civilization,” says Kendall. “I was eager to travel north to see the great Gothic cathedrals. But Ted knew better: ‘You’re in the heartland of Romanesque Europe. This is where you need to begin. We’ll show you the Romanesque basilica of Conques and its magnificent tympanum.’ We’d never heard of either. I drove, as he guided us to a succession of marvelous sites. Ted had revealed a world we had never imagined, and opened for me a field of study that occupied the next 25 years of my academic life. His thoughtful, deeply informed, and timely intervention was the priceless gift of a sharing friend.”

Wright also published books on American and British authors Auden; Yeats, Eliot, and Pound; and Keats, T. S. Eliot, and Henry James, in addition to editing Seven American Literary Stylists from Poe to Mailer (1973) for the University of Minnesota Press. He was named a Guggenheim Fellow, a Fellow of the National Endowment for the Humanities, and was twice awarded Fulbright Fellowships to teach at the University of Aix-Marseilles (1964-66) and the University of Thessaloniki (1977-76).

“Though we chose different poets to teach our students,” remembers Professor Emerita Toni McNaron, “we both understood the enormous power of poetry to change minds and hearts. I am particularly grateful to him for teaching me early on the power of the gerund in poetry. He showed me that a poet who used a gerund was trying to show readers that an action that may have literally occurred in a past was still going on in some realm. I have found myself over and over teaching this same magical truth, every time acknowledging Ted. A man of genuine graciousness, he connected with students around a love of words and forms.”

One of those former students, Greg Zeck (BA 1969), took multiple classes from Wright; the professor wrote him recommendations for both graduate school and teaching jobs. “On returning to the Twin Cities in the 1980s,” Zeck recalls, “I found myself in a Sunday tennis doubles match with Ted as my partner, followed by beer and lively talk (the best part of our game). Later, in retirement, Ted was a gracious host, putting me up and showing me around first Tucson and, later, Louisville. When I visited him just last spring, I was sure Ted was vying for his mother’s longevity record (she died at 102), as he was still mentally acute and engaged, if a bit frailer physically. But such was not to be.”

Wright was born on December 17, 1925, in Staten Island, New York. He attended Columbia College until he was drafted into the Army in 1944; after serving in the European Theater until the end of World War II, he finished his BA and began graduate work, which he completed in 1957 at the University of California at Berkeley.

In recent years, he published an autobiographical book, Starting from Staten Island: Memories of Peace and War in the 1930s and 1940s (2014), and a family history, The Wrights of Vermont (2013).

Professor Wright was predeceased by his wife, Jerry Honeywell Wright, and is survived by his nephew Raymond Weaver and nieces Pamela Rehman, Colleen Long, and Sharon Wright. A celebration of his life will be held in Louisville at a later date.