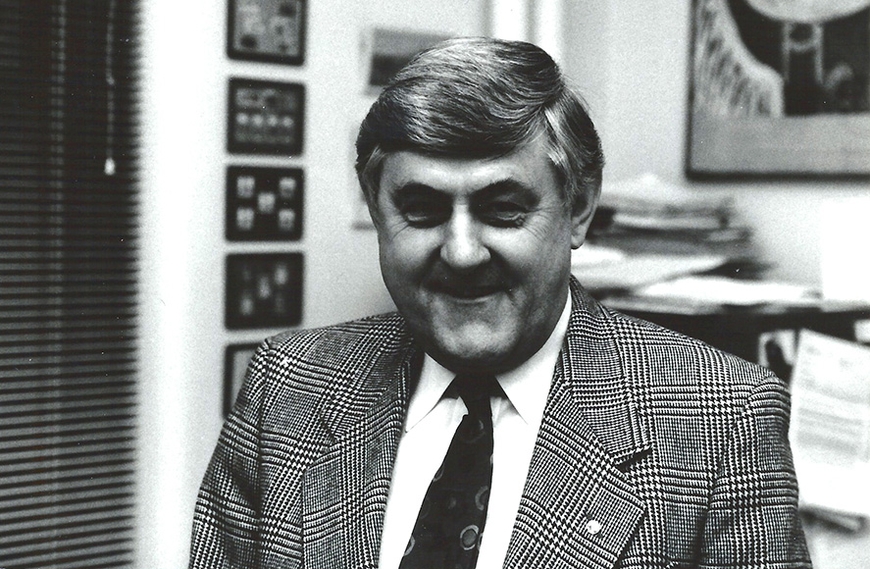 Professor Emeritus Peter Reed died November 22 at his home in Minneapolis, at age 83. A “kind, thoughtful, and patient teacher and mentor,” as former student Mary Engelman described on Facebook, he received the College of Liberal Arts’ top teaching award. During his 37 years with the department, he also served as English chair (1988-1991) and was elected to a second term before being named CLA associate dean. Reed was the first professor of English to hold a dean’s position since the early 1960s.

“Peter was warm, generous, and supportive,” says Professor Emeritus Gordon Hirsch. “He was a wonderful and committed administrator, teacher, scholar, and friend.”

In an interview upon his retirement in 2002, Professor Reed cited those very roles as providing great satisfaction through his career at the U, though teaching came first for him. “I’ve probably had more fun in many classes than the students,” he said then. “What could be better than sitting talking with bright young people about Shakespeare or William Boyd?”

“Peter Reed was an extraordinary professor,” wrote another former student, Donna Isaac, also on Facebook. “I learned so much about Kurt Vonnegut from him and admired both of them.”

Reed took four groups of Minnesota students to London for courses he developed and taught there, creating a circle of sorts for the London native born in the East End. During World War II, the family home was bombed by the Germans, and they moved to a rural village in Surrey, south of London, where his grandmother lived.

During high school, he began distance running, a physical and mental practice that led him to education opportunities in the US. To become a better runner, he reported in that 2002 interview, “I read everything I could find, emulated as best I could the training methods of the great Emil Zatopek and Gordon Pirie, and by dint of training more seriously than other kids got to be fairly good.” As his obituary details, he continued running during his four years of service in the Royal Air Force (RAF), where his hopes of training as a pilot were dashed by disqualifying color blindness. While in the RAF, Reed was recruited by a visiting coach from the US Olympic team to run distances at the University of Idaho, where he earned a degree in English; and he went on to the University of Washington for his PhD, arriving at the University of Minnesota in 1965.

Reed’s literary scholarship also was a source of much fulfillment. A scholar of 20th-century British and American literature, Reed published the first book on American novelist Kurt Vonnegut, in 1972: Writers for the 70's: Kurt Vonnegut Jr. “The thought that I was writing about a living author who could read what I wrote scared the pants off me at first,” Reed noted 30 years later. But Vonnegut called him up and invited him to lunch, and the two went on to become friends. Reed ended up writing or editing four more books about the writer, whom he called “probably the funniest person I’ve met, and one of the kindest and most generous.”

In 2014, Reed assisted Vonnegut’s daughter Nanette in editing Kurt Vonnegut Drawings, to which he also contributed the essay "The Remarkable Artwork of Kurt Vonnegut.” And in 2015 he was awarded a Professional Development Grant for Retirees, through the University of Minnesota Retirees Association (UMRA), to write a further book about Vonnegut’s artwork.

Beginning to serve as associate dean in 1991 “was almost like being able to have a change of career without forgoing the old one,” Reed remembered in 2002. He particularly enjoyed working to improve CLA-wide undergraduate advising and curriculum.

"Peter had a gift for academic leadership," says Philip Furia, who worked with Chair Reed as assistant chair in English and later as a fellow CLA associate dean (he's now a creative writing professor at the University of North Carolina Wilmington). "I never saw him lose his temper—or his great sense of humor. He treated the most trying students and faculty with kindness."

“The college relied on him a great deal when he was associate dean,” Professor Michael Hancher recalls. “Teaching, scholarship, service—he really cared about all three aspects of our mission.”

“Peter was pure class,” says former CLA Associate Dean Julie Carson, who went on to serve as College of Liberal Arts Dean for Willamette University. “He had a personal and rare intellectual elegance that revealed itself in the widest range of topics, from literature to politics to basketball to sea turtles.” (Reed was an enthusiastic supporter of the Sea Turtle Conservancy and Turtle Island Restoration Network.)

The Department of English offers deepest condolences to Professor Reed's wife Maggie, as well as to his sister, niece, and nephew.