In this family, reading is not only pleasurable, it's a map for life 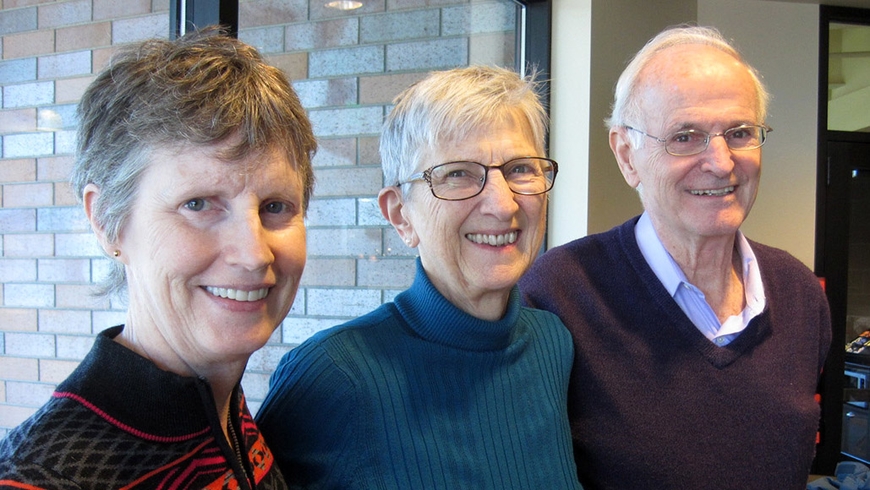 Three Minneapolitans with diverse, successful careers: a doctor, a community college teacher, and a technical trainer. All grew up together in Madelia, a Southwestern Minnesota town of 2000 people. Two are siblings, two are married. All three have published path-breaking books. All three majored in English from the University of Minnesota.
This is a story about doing, becoming, something you’d never imagined yourself doing, being.
“I just assumed, as a woman, that I could be either a nurse or a teacher, and my aunts were nurses, my sister was a nurse,” says Nancy Manahan (BA 1969) (above, middle). “I knew I didn’t want to be a teacher--who would want to do that?!”
“I was an athlete, and after high school I decided I wanted to be a coach and a math teacher,” says Bill Manahan (BA 1962; MD 1966), Nancy’s brother.
“I loved literature, loved to read, loved my English teachers in high school,” says Becky Bohan (BA 1974), Nancy’s wife. “I was looking at becoming a teacher.”

"Having the big picture that the
English major gives makes
the practice of medicine much
easier, and it makes for better
doctors." - Bill Manahan

This is a story of inspiration springing out of struggle.
“I was in nursing for three years,” says Nancy. “But my adviser called me in and said, ‘I noticed that you’re getting a D in Organic Chemistry. I also notice that you get As in every English class, and you’ve been taking upper level English classes since you arrived. I wonder if you’re in the wrong major?’ ‘Oh no! I want to be a nurse.’ Then, the summer after my junior year, my sister Pat was expecting a fourth child and in desperate need of help. So I spent the summer on the farm in Madelia, diapering and taking care of runny noses and not getting enough sleep . . . and most importantly never having time to read, to have literature replenish me. I realized I couldn't be a nurse. I'd go crazy taking care of people all day long. I gave myself permission to follow my passion, to do what I loved instead of what I was supposed to do."
“I was majoring in math,” says Bill. “At some point I realized it wasn’t going well, so I went to see the vocational counselor. He gave me a test, and the results came back: Number one was rancher, number two was farmer. I looked down the list, and number eight or nine was medical doctor. And I said, ‘I’d like to be a doctor.’ Bam, it just happened at that moment. He said that, starting that year, if you wanted to be a doctor, you didn’t have to major in chemistry or biology; you just had to take certain pre-med courses. 'What do you like to do?’ ‘Outside of playing sports? I like to read.’ He said, ‘Why don’t you major in English?’ I said, ‘I can major in English and go into medicine?’”
“I started out on the teaching track,” says Bohan. “But then I thought, ‘I don’t actually like these Education courses. I’m going to be a pure English major.’ After graduation, I went to Control Data for a few years, where I wrote textbooks; it evolved into writing scripts for computer programs, for their educational software. Eventually I founded my own business with a business partner, Knowledge Design and Delivery, Inc. We did mostly technical training. For example, MnDOT needed training on how to keep the roads clear in winter. We put together a course on snow removal that dealt with proportions of sand to salt, how it should be laid down, and at what temperature. We trained the trainers at MnDOT, who went back to their districts to train their employees.”
This is also the story of finding a path that fits you, even if sometimes you have to break your own trail.

"We preferred to hire English
majors. We could train people
in the subject, but it’s a lot
more difficult to train people
to write.” - Becky Bohan

“My dad was so disgusted that I was majoring in English,” Nancy recalls. “He said, ‘You have joined the College of Lost Ambition—that’s really what CLA stands for, you know.’ Luckily during my last semester at the University, Professor Toni McNaron suggested that I apply to Illinois State University, where there was a two-year program on community college English teaching. Well, once I started taking Education courses and actually teaching, I loved it! It’s the best job in the world. I did publish quite a bit, but the focus is on teaching, student contact, the classroom. I just loved it.”
Nancy taught literature, composition, film studies, and women’s studies at community colleges in California and Minnesota, finishing up at Minneapolis Community and Technical College; she has a PhD in English literature. She co-edited the groundbreaking—and bestselling—1985 anthology Lesbian Nuns: Breaking Silence as well as On My Honor: Lesbians Reflect on Their Scouting Experience. With Bohan, she wrote the story of Bill’s wife Diane and her journey with cancer, Living Consciously, Dying Gracefully, which won a Midwest Book Award, among several honors.
“Sometimes we have this mistaken idea that medicine is this pure science,” Bill observes, “and that with a scientific history, exam, and lab tests, we’ll know what’s wrong with a patient. But about 50 percent, at least, of what comes in the door relates to the psycho-social-emotional aspect of what’s going on in the patient’s life. Having the big picture that the English major gives makes the practice of medicine much easier, and it makes for better doctors. We get so much biology and chemistry and physics the first two years in medical school, it almost should be forbidden for undergraduates!" 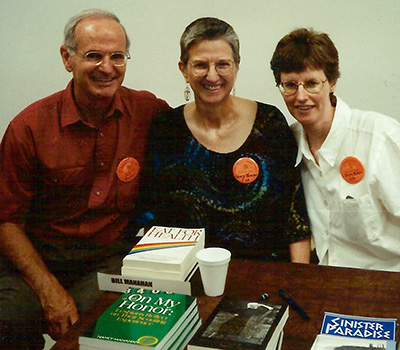 A doctor for 30 years in Mankato, Bill quickly becoming engaged with integrative and holistic medicine as he listened to and learned from his patients. Author of the book Eat for Health, he has published numerous articles in a wide variety of conventional and integrative medicine journals. In 1982 he founded The Wellness Center of Minnesota, one of the first physician-led integrative medicine centers in the country, and in 1994 co-founded Mankato’s Open Door Health Center, a clinic for the uninsured. After his wife’s death, he moved to Minneapolis; he’s Assistant Professor Emeritus with the Department of Family Medicine and Community Health at the University of Minnesota Medical School. Past President of the American Holistic Medical Association, he is current Co-Chair of Minnesota Holistic Medicine Group.
"At my company Knowledge Design and Deliver,” says Bohan, “we would go out and interview subject matter experts, in any subject from around the world. We had this massive data, but we had to structure it and present it in a way that we could educate people. We preferred to hire English majors, because we found they had that ability to manage information and write about it in a coherent way. We could train people in the subject, but it’s a lot more difficult to train people to write.”
Becky Bohan is the retired Vice-President of Knowledge Design and Delivery, Inc., a training consulting company. Along with writing Living Consciously, Dying Gracefully with Nancy, she has published two novels, Sinister Paradise, and Fertile Betrayal, and is finishing up a third. She earned an MA in English Literature from the University of Wisconsin-Madison.
This is the story about the importance of reading and studying literature, whatever job you do.
“Reading can put you in the head of another person,” says Bohan, “and really foster a sense of empathy. And that can expand out into the real world, that there isn’t just one answer, that there are multiple perspectives.”
Bill nods. “As an English major you look at a bigger picture, so you’re willing to say, ‘Even though I totally know you’re wrong’”—he laughs—"‘I’m willing to look at this again, or try it, or read a book with a different view.’”

“I think literature is crucial
for civic life and democracy.”
- Nancy Manahan

“I think literature is crucial for civic life and democracy,” says Nancy. “Every book a person reads has the potential to transform prejudice into enlightenment, especially novels, because your whole emotional and intellectual being is involved in walking in somebody else’s shoes for the days or weeks it takes you to get through that book. I may not have a friend who is the kind of person the author is, but after reading a novel about them, I can’t think they’re ‘other.’ I know that they’re human the same as I am.”
“Well said!” Bill smiles at his sister, at his sister-in-law, across the table at the Edina Lunds. In a moment, they’re sharing book recommendations, rapid-fire, so many miles on, so many mistakes and corrections and leaps forward, so many joys and griefs and loves, so many new chapters, so many worlds, so many pages, from the start. In Madelia, Minnesota, in the mid-20th century.
This is a story about finding the path that fits you. Blink. You’re it.
English
Category
Alumni
Engagement
Arts
Humanities
Research and Creative Work
Share on: