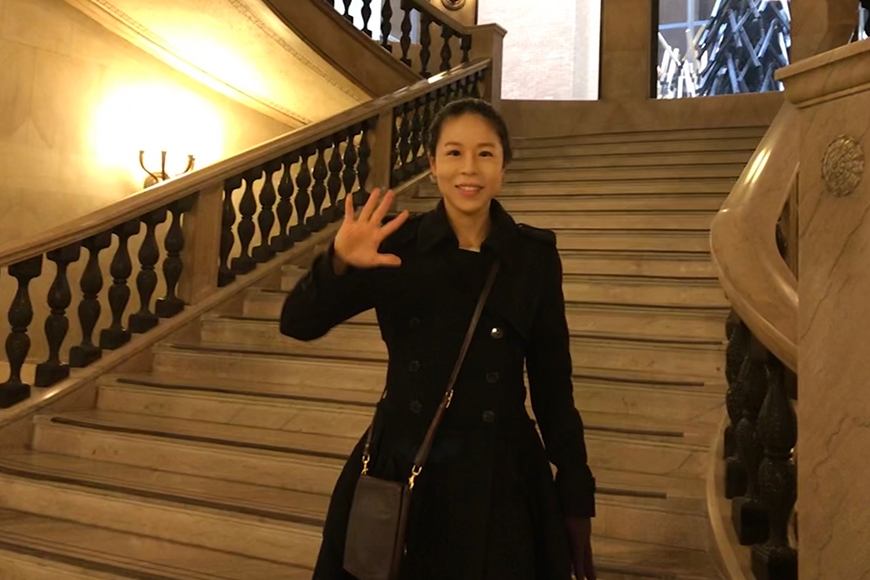 Bomi Jeon is a doctoral candidate in English literature who received Graduate Research Partnership Program support this year to do research for her dissertation, currently titled "Experimenting with the Everyday: Critical Visions of Space, Time, and Sociality in Postwar British Fiction and Cinema."

For the project funded by GRPP, my primary goal was to look at the everyday life of the Caribbean peasants and working class people in George Lamming’s In the Castle of My Skin and Sam Selvon’s The Lonely Londoners, exploring the ways in which these characters reappropriate quotidian space through carnivalesque tactics. I focused on the literary representation of each landscape and the characters’ active interplay with their surrounding environments in order to elaborate on the spatial rhetoric of (post)colonial cultural formation.

Notwithstanding the dissimilarity of spatial settings and the historical context they employ, the two novels are significantly comparable in reshaping the patterns of narrative to accommodate the unsolved everyday struggles of the colonized or ex-colonized with the dominated space. In a sense, the colonial landscape of In the Castle of My Skin and the metropolitan center in The Lonely Londoners are intricately linked to each other in that London itself, which is an operational center of the British colonial plantation system in Lamming’s fiction, eventually functions as the extension of its colonial, racialized space in Selvon’s novel.

"In preparation for a visit to
the Schomburg Center for
Research in Black Culture in
New York, I examined the
postwar history of immigrants
in Britain and (post)colonial
Caribbean culture."

My argument is that the kind of cultural reinstatement in their fiction is often achieved by finding various ways of reading and watching the institutionalized spectacles on the part of their “peasant” characters. Living in a society still dominated by residual forms of British imperial culture, the colonized individuals and groups show that constant negotiating, diverting, and resisting the imposed order means to assert potential for a new spatial history. In both texts, the eccentric reading practices attained through daily movements, words, and habits of ordinary people are characteristically anti-disciplinary as they undermine the meanings attached to institutional imperatives.

In preparation for a visit to the archival papers and materials held in the Schomburg Center for Research in Black Culture, New York, I examined the postwar history of immigrants in Britain and (post)colonial Caribbean culture. I also undertook an extensive literature review of theoretical sources particularly related to spatial discourses in postcolonial, cultural, and everyday studies. My spatial analysis of the novel largely refers to the works of intellectuals such as Michel de Certeau, Mikhail Bakhtin, and Stuart Hall in order to discuss the politics of style that resists the social conformity and codified hierarchy repeatedly endorsed by conventional narrative practices.

With support from the GRPP, I also visited the New York Public Library in New York, where the periodical publications such as BIM and CAM (the Caribbean Artists’ Movement) are stored. The library’s collections enabled me to further explore popular literature’s reference to the common experiences of local daily life as well as the history of the linkages made between the cultural and the political in twentieth-century Caribbean intellectual life.

With this background material prepared, I have completed drafting the project titled "Tactics of Carnivalesque Resistance and Caribbean Cultural Identity in George Lamming’s In the Castle of My Skin and Sam Selvon’s The Lonely Londoners." I am in the process of making some minor changes and revisions. My abstract on this project has been accepted by the 51st Northeast Modern Language Association Annual Conference to be held in March, 2020 in Boston.