Jack LaFontaine: Knight of the Oval 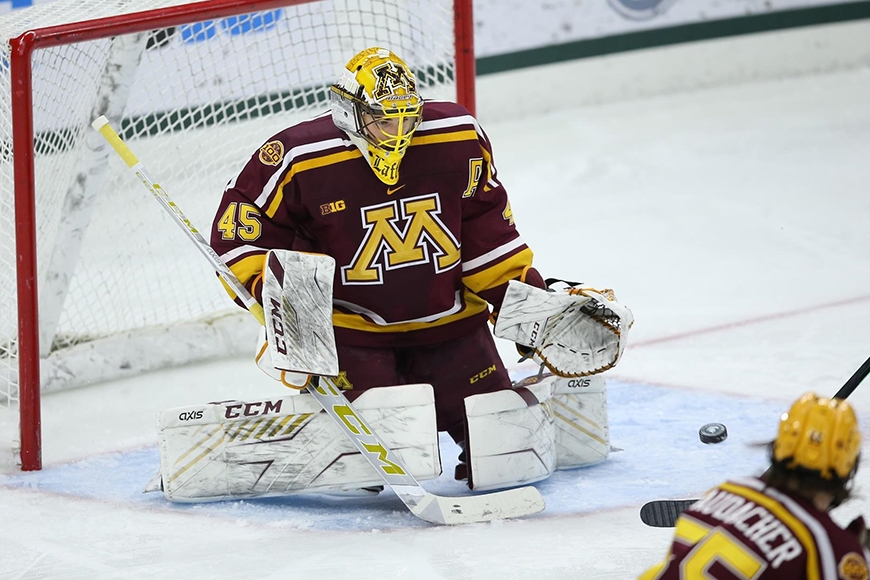 Gopher hockey senior Jack LaFontaine is a finalist for the Mike Richter Award, given to the top goalie in Division I men's hockey. He’s leading the nation in wins for goalies. He’s been nominated for the Hobey Baker Award, college hockey’s highest honor. Ranked #4 nationally, his Gophers will continue play in the Big Ten Hockey Tournament this week, with aspirations of reaching—and topping—the NCAA Frozen Four.

What is LaFontaine looking forward to, on this midweek day in mid-March?

An afternoon senior seminar with English Professor Rebecca Krug, in which they’ll discuss a 15th-century text about King Arthur and the Knights of the Round Table.

LaFontaine says they’re getting close to finishing Le Morte D’Arthur, written by a politically minded knight while in prison. “I’m a little bit fascinated with Sir Thomas Malory,” the English major confesses. “We have this ongoing debate in our class: was he a good writer? The more you analyze his text, and the nuances of how he brings forth certain themes, you start to appreciate him more. He knows what he’s doing.

“For this to be my last class, of my last semester,” he continues, “it’s leaving a great lasting memory of my education career at Minnesota. This is the second time I’ve had Professor Krug, and she’s amazing. She gives us the freedom to write what we want and to bring forth new ideas.”

A self-confessed bookworm, LaFontaine says he’s enjoyed reading and writing since he was a kid growing up outside Toronto. But the best thing about majoring in English, he says, is that freedom to think beyond what’s been said, to build your own arguments and analysis. “The professors at Minnesota are so open to new ideas,” he says. “That’s what makes being an English major so much fun: learning new ways to interpret texts, trying to understand the different cultures that literature comes from. 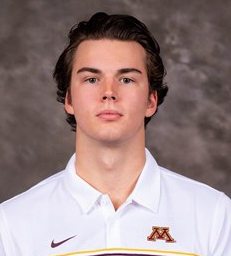 LaFontaine’s path from Mississauga, Ontario, to Minnesota and a peak season of Gophers hockey has not been a story line without twists and turns. Recruited to Michigan, which had a surfeit of goalies, he was let go after his sophomore year. LaFontaine ended up playing junior hockey for the Penticton Vees in interior British Columbia, a “heartbreak” he turned into opportunity by winning the British Columbia Hockey League’s Top Goaltender honor and attracting the interest of the Gophers.

Was there a particular book that helped him get through those days?

“I’ve always been interested in biographical books,” LaFontaine reveals. “So Andre Agassi’s Open—I think I’ve read that book five times. Just listening to his journey, listening to how he deals with adversity as a professional athlete, that’s a book that’s really got me over some tough times in my life.”

Now a starting goalie and team leader on the best Gophers men’s hockey team since 2016-17—not to mention a senior trying to wrap up degree requirements—LaFontaine is still grinding. He admits to keeping an old-fashioned student agenda, or planner. “It sounds so cheesy,” he says with a laugh, “but deadlines are everything, staying on top of it is everything. Being diligent and organized. Breaking up reading and writing in chunks so I’m able to put my best foot forward.”

In addition, he keeps multiple journals, writing his way to understanding, whether it’s about the granular details of hockey, his coursework, or his personal life. “That’s a way for me to vent my feelings and kind of process what’s going on in my life,” LaFontaine says. “For me, that’s how I learn, right? I learn through writing; I learn through re-reading.

Wherever his hockey journey goes, however it turns out, LaFontaine aims to write a memoir tracing his path. And maybe there’s a kid out there in the future who will find that book, and it will make all the difference.

In the last months of his senior year, in the midst of March hockey madness he has helped incite, Jack LaFontaine is still working to find new ways to read texts (literary and otherwise), still reaching beyond received wisdom. He knows what he’s doing.