Lives in Literature: Will and Rosalie Weaver

The story of Will and Rosalie Weaver began when the English majors met in a Shakespeare class ("The stars, you could say, were aligned," says Rose). After graduation, the couple "went back to the land" in northern Minnesota, where Rose began substitute teaching in a local high school. But she was soon drawn to graduate study first at Bemidji State University and then the University of Manitoba; in 2015, she retired from Bemidji State as Professor Emerita of English after 28 years of service. Dr. Weaver has been a contributor and editor with Canadian Pulitzer Prize winner Carol Shields on several anthologies highlighting women’s voices. 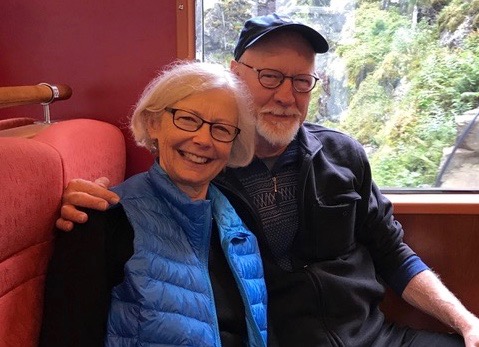 Meanwhile, Will was writing, buoyed by the "literary and creative impetus" he received at the U via classes with poets Ted Wright and John Berryman and with scholars such as Toni McNaron and Judith Garner. In 1986, he published the novel Red Earth, White Earth, adapted as a CBS-TV movie in 1989. His story collection A Gravestone Made of Wheat won a Minnesota Book Award, among other honors, and the title story became the 2006 feature film Sweet Land. Will went on to publish numerous novels for young adults and children, as well as a memoir and story collection. He received both McKnight Foundation and Bush Foundation prizes for fiction and taught creative writing at Bemidji State until he retired in 2006 as Professor Emeritus. In 2018, he gave BSU’s commencement address as the recipient of their Distinguished Minnesotan honor.

Will and Rose caught us up on their stories.

Will, when and how did you realize you wanted to a writing career?

I grew up on a dairy farm in northern Minnesota. The idea of becoming a writer was as far afield as becoming a ballet dancer. At the University of Minnesota, I gravitated to English largely because I liked literature, but as much so because of the faculty I encountered. My first short stories got me into the Stanford Writing Program, where classmates included Alice Hoffman and Scott Turow. The Stanford experience cemented my path as a writer. But none of it would have happened without my deep immersion in the literary life of the U.

You've written several books about racing for boys, as well as a teen dystopia series. Your 2003 young adult novel Memory Boy was even produced as a full-length opera by the Minnesota Opera. What attracts you to authoring books for children and teens?

After I had kids of my own, I came to see the overwhelming power of pop culture, video games, and the internet (all forces aligned against the act of the reading). I wanted to write a few good novels to keep kids reading–boys, especially. And I’m happy to say that these novels were successful not as best sellers, but as lifesavers. Lifesavers for English teachers always looking for books for boys. Lifesavers, perhaps, to boys themselves. Their parents still write me with thanks, and the opening line of their letter invariably begins, "My son is not a reader, but  . . . ."

Rose, what did you enjoy most about your career in academia? Any advice for current majors who are interested?

During my time at Bemidji I enjoyed doing research in Canadian literature. But, most of all, I enjoyed teaching my students. In a small state university, where many students were first in their family to attend college, a teacher can make a real difference in a student’s life. My advice is that there is never a straight path to the career destination.

Will, the English department has a new Creative Writing minor (along with the MFA degree), and many students are very interested in writing and publishing creative work. Any advice?

Publishing today has never been easier or harder. With the editing and tech tools available, anyone can be a self-published novelist. But to find a “real” publisher (an established press that will pay you for your work, and help you refine it) is still the goal, it seems to me. And that takes a serious commitment to the craft of writing, which itself must be underpinned by lots of reading. The metaphor of "10,000 hours"—that is, the apprentice time it takes in any professional field—is not far off from what’s required to launch your publishing career.

Rose, what do you most appreciate about your time at the University of Minnesota? Was there a professor or class that stands out?

Professor Ted Wright’s Yeats class was wonderful. Ted was a role model for aspiring teachers. Also, an additional two quarters of Yeats with Professor Chester Anderson were challenging and delightful. Finally, in my Shakespeare class with Professor Shirley Garner, drama students enlivened the cold winter days in Lind Hall with readings from the plays.

What books are you reading and recommending these days?

Will: I’ve returned to writing adult narratives, and am deep into writing a big novel of the Midwest. I don’t read fiction when I’m writing fiction, so these days it’s poetry. Mary Oliver. Wendell Berry. And the new translation of Beowulf, by Maria Dahvana, is fabulous.

Rose: I gravitate to memoirs, and anything by Alice Munro and Margaret Atwood.