An Evening with Professor Nadine Strossen: Why Should Hate Mongers and Extremists Have Free Speech Rights? 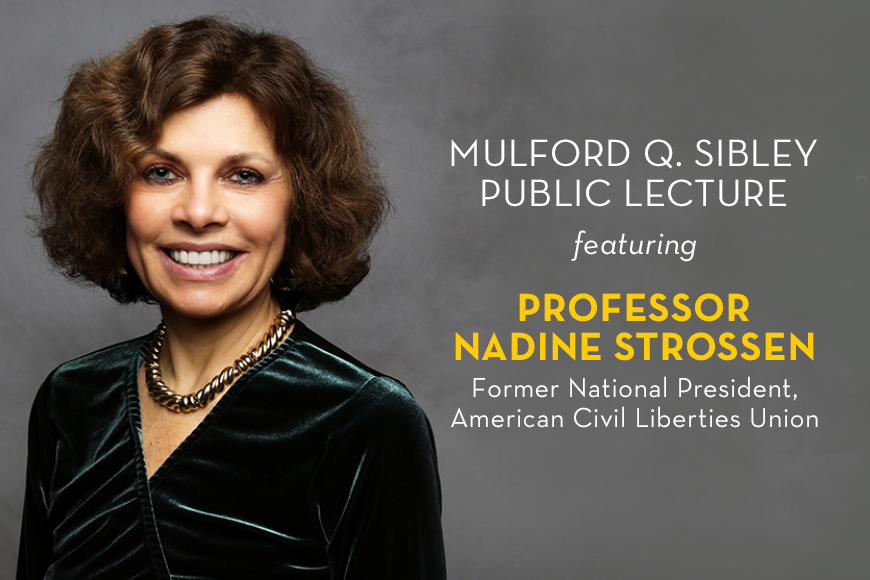 We have reached the in person capacity for the venue. Thank you for your interest! Please join us by watching the livestream of the event. A recording of the lecture will be available on the department's YouTube channel at a later time.

On April 12, 2022, the Department of Political Science will host a public event to honor the legacy of former Political Science Professor Mulford Q. Sibley, who was a staunch defender of free speech, academic freedom, and the environment.

The event will take the form of a discussion with Professor Nadine Strossen followed by a Q&A. Professor Strossen, a chaired Professor Emerita at New York Law School and past national President of the American Civil Liberties Union (1991-2008), is a leading expert and frequent speaker and media commentator on constitutional law and civil liberties, who has testified before Congress on multiple occasions. Strossen’s 2018 book HATE: Why We Should Resist It with Free Speech, Not Censorship has earned praise from ideologically diverse experts, including Harvard Professor Cornel West and Princeton Professor Robert George. She serves on the advisory boards of the ACLU, Electronic Privacy Information Center, Foundation for Individual Rights in Education (FIRE), Heterodox Academy, and National Coalition Against Censorship. The National Law Journal has named Strossen one of America’s “100 Most Influential Lawyers,” and several other national publications have named her one of the country’s most influential women.

Gifts to the Mulford Q. Sibley Fund make events like this one possible. To honor Professor Sibley's legacy, please consider making a gift.