An Exhibition and Award to Honor “The Mayor of Regis”: Artist and Longtime Student Fred Joel Larson

'Fred Joel Larson: A Celebration of Life and Art' is on view now at the Regis Center for Art, and an Excellence in Teaching Award in his name has been established. 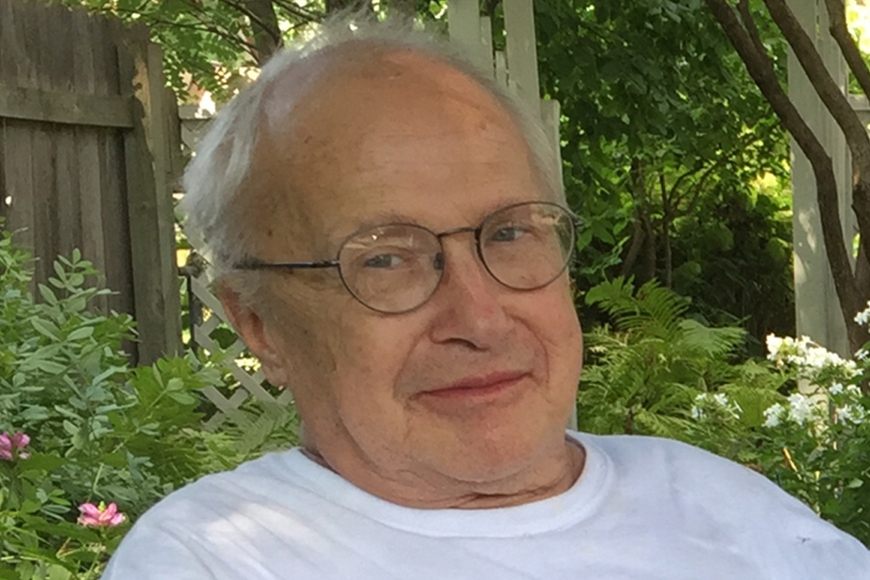 Most students don’t take classes for 13 years straight, but according to his friends, family, and the faculty who remember him fondly, Fred Joel Larson was not most students. From 2007 through 2019, Larson worked studiously and tirelessly at the Regis Center for Art, creating a wide and wild body of work that included photography, drawing, printmaking, papermaking, collage, mixed media installation, and thousands of digital drawings.

“Fred was into the building before 9am, sometimes the first person in the building,” recalls his friend, classmate, and collaborator David Moore, Jr., who took art classes at the same time through the College of Continuing & Professional Studies. “And he worked faithfully five days a week until 3 or 4pm. He never owned a car, he either took the bus or would rent a bike, and he would come every day, rain or shine.”

“Day in and day out, he was there,” confirms his daughter, Robin Larson. “They called him the Mayor of Regis,” she says with a laugh.

Born in 1947, Larson first attended MCAD in the early ‘70s but never actually graduated. Over the years, according to Moore, Larson held a variety of jobs: “He had been a bouncer, a chef, a bartender, a furniture mover, a commercial printer at a shop.” Eventually, Larson returned to finish his credits at MCAD in 1997, and when he was eligible for the reduced class rates offered to senior citizens at the U, he dove in headlong.

“And that’s when everything really started for him,” says Robin. “He’s always been an artist, I mean since he was a kid. I have artwork of his from kindergarten. I think he really blossomed in his later life with what he really enjoyed.” 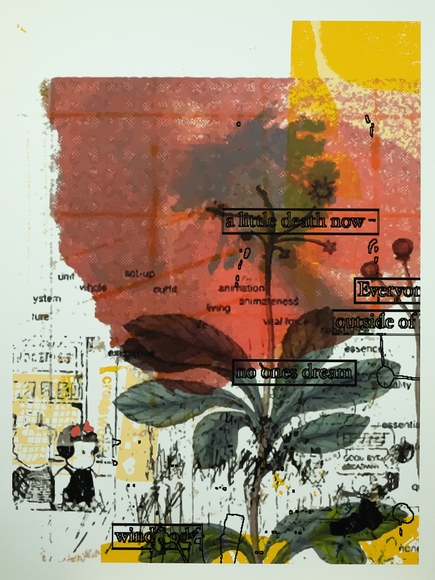 Sadly, Larson passed away from cancer in January of 2020 at the age of 72, and now the Regis Center’s Quarter Gallery is honoring his work and his legacy with a new exhibition opening this week, Fred Joel Larson: A Celebration of Life and Art.

The works in the show are small in scale but expansive in their experimentation. On view are analog and digital prints and collages that reference established artists like Robert Rauschenberg, Joseph Beuys, and Andy Warhol alongside early cartoon characters and pulp comic strips — all of it remixed with ripped edges, textured papers, swirling penstrokes, and enigmatic snippets of text. Larson was an early adopter of digital drawing, using iPads to create an endless array of collaged elements based on his own photos, found images, and ideas gleaned from a dense library of philosophical and poetic literature. What drove him, Moore thinks, was an obsession with curiosity and discovery. “Part of the time most days [at Regis] he was reading. He was an amateur philosopher and historian.”

Indeed, in cleaning out her father’s South Minneapolis home after his passing, Robin Larson discovered not only 1,000 or more original works of art but, by her estimation, some 8,000 books. “And they all had a bookmark in them,” she says. “He had touched every one of them. It was mainly philosophy, poetry — heavy duty stuff.”

That intellectual curiosity drove his art practice ever forward, to the point that Larson had little interest in ever exhibiting his work. Printmaking Professor Jenny Schmid remembers him as an engine of creativity. “Fred was all R&D. He never wanted to stop and have a show; he liked the space in between. His work was so exciting and experimental. He moved really fluidly between the iPad and drawing and collage.”

“He was a full-time, lifelong student. That was his passion,” says Robin Larson. Near the end of his life, she asked if she could put on an exhibition of his work. The answer: “‘Absolutely not,’” she recalls with a chuckle. “But it just felt right. This was his life. I just can’t forget about it, so we made the decision to go forward.

“I am my father’s daughter, and I’m so stubborn that you can’t tell me what to do,” she says laughing. “I’m not worried about it because it needed to happen.”

During his time at Regis, Larson did get talked into showing twice — once in Regis West Gallery in 2014 and then in the Quarter Gallery in 2015, both times in collaboration with David Moore. The two were connected by then Associate Professor and Department Chair Alexis Kuhr (who now teaches as a Professor at UMass Amherst). Soon they were sharing a workspace in Regis West, bouncing ideas and practices off of each other. When one of Moore’s large works-in-progress was mistakenly thrown away at the end of a semester, Larson fished it out of the dumpster and managed to salvage elements of it in his own collages, much to Moore’s delight. For this exhibition, Moore returned the favor, creating two brand new paintings that include some of Larson’s own imagery. Several of Moore’s paintings and drawings are also on view, as a tribute to their long, collaborative friendship.

“Dave Moore helped me a lot,” Robin Larson says, “before and after [my father’s] death. This summer he came over and looked through all the artwork with me. I’m not an artist, so I don’t see things the same way, so I really appreciated his time to go through it all. He was just blown away by the masses of it.” 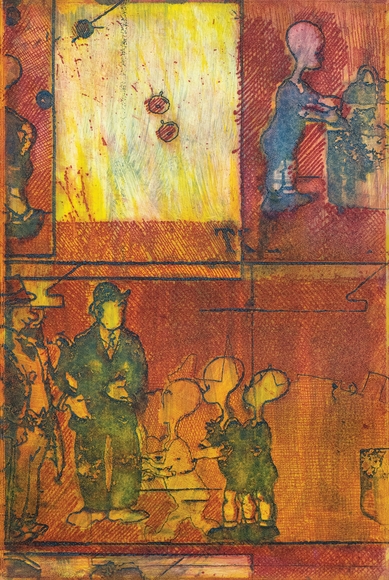 Fred Larson’s focus was the work itself — the labor of making and thinking and doing — more so than chasing accolades or sales. And despite whatever protestations he may have had about exhibiting, it is certainly fitting that this work return here, to be shown on campus. “The U is where he loved to be,” says Robin.

“It’s hard to think of him being gone because he was just always here and present and working,” says Schmid. “So engaged and thoughtful. Other students loved him, too. He took it very seriously and always had questions in his work that led to the next work.” 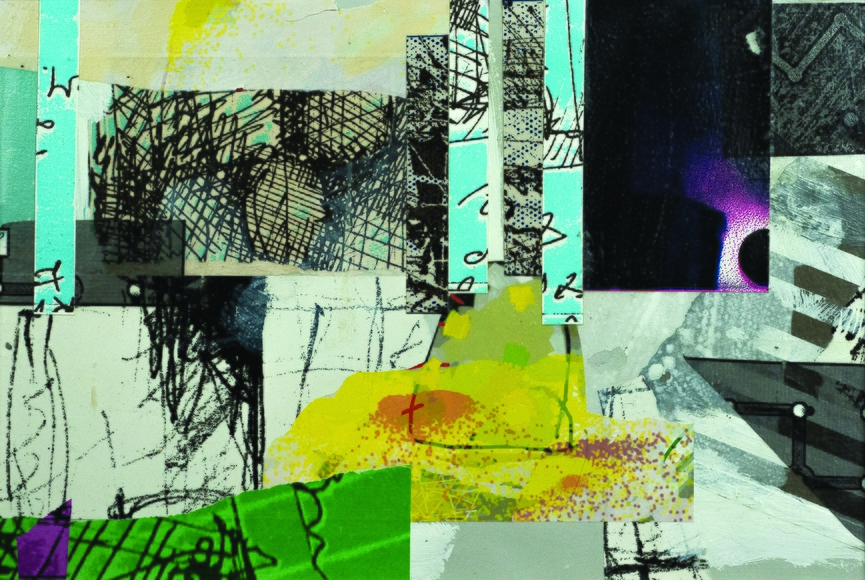 “I always considered having Fred in a class as an added benefit no matter the class,” recalls Technology Administrator Sonja Peterson. “He brought insight and wisdom that was refreshing. He is very missed by me and all of the staff here at the Department of Art.”

The exhibition is on view now through February 11, with a public reception on Saturday, January 21, concurrent with the reception for A Tender Spirit, A Vital Form in the Katherine E. Nash Gallery, a retrospective of work by the late Arlene Burke-Morgan and Professor Emeritus Clarence Morgan, with whom Larson also took classes. It will be a homecoming of sorts — a chance to celebrate and remember, through their work, the people who have touched our lives and helped to build this community.

“And we’re having pie,” Robin says with another laugh. No wine, no cheese, nothing fancy. “My dad loved pie, he was a pie-aholic. So we’re keeping it simple.”

The Department of Art is also pleased to announce that, in a further tribute to Larson's legacy, David Moore and his wife Leni Moore have established the Fred Joel Larson Excellence in Teaching Award in the Department of Art through the Dave and Leni Moore Family Fund at the Minneapolis Foundation. The first recipient of this award will be announced later in the spring semester of 2023, going to a Department of Art faculty member who demonstrates the highest standards of teaching, research, scholarship, and innovative practice and exemplifies the generous creative spirit of Fred Joel Larson. The award recognizes educators whose passion and commitment to teaching enhances students' individual and creative growth through their studio instruction.

Fred Joel Larson: A Celebration of Life and Art is on view at the Quarter Gallery January 17 - February 11, 2023, with a Public Reception Saturday, January 21, 6 - 8pm. That same evening visit the exhibition A Tender Spirit, A Vital Form: Arlene Burke-Morgan & Clarence Morgan in the Katherine E. Nash Gallery. 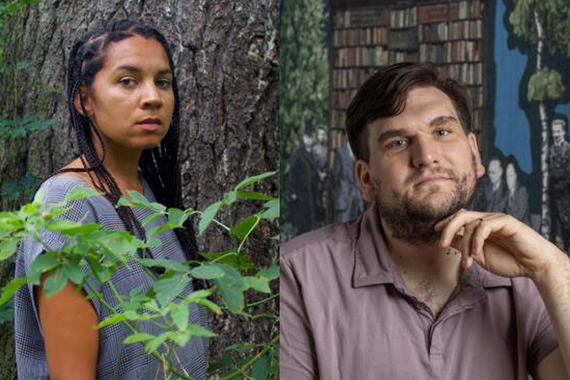 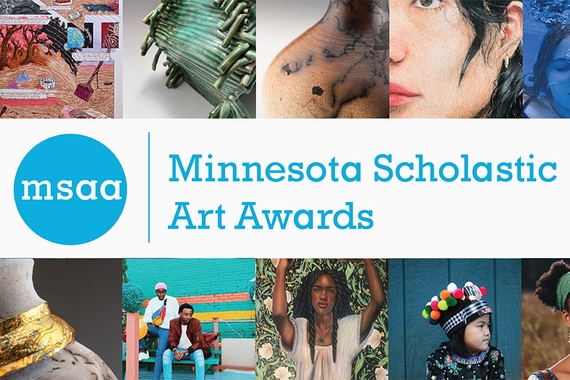 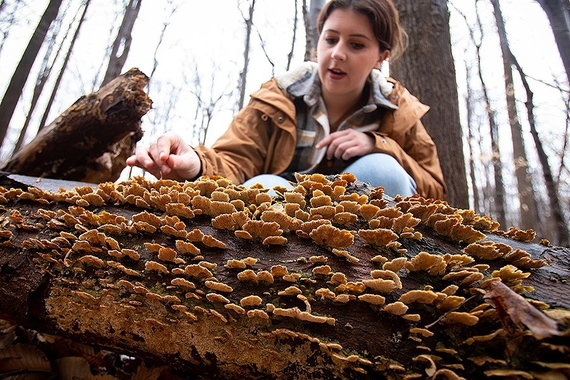 In this interview with UB Now, Robers discusses how an Art and Ecology class at UMN opened up her studio practice to include science.