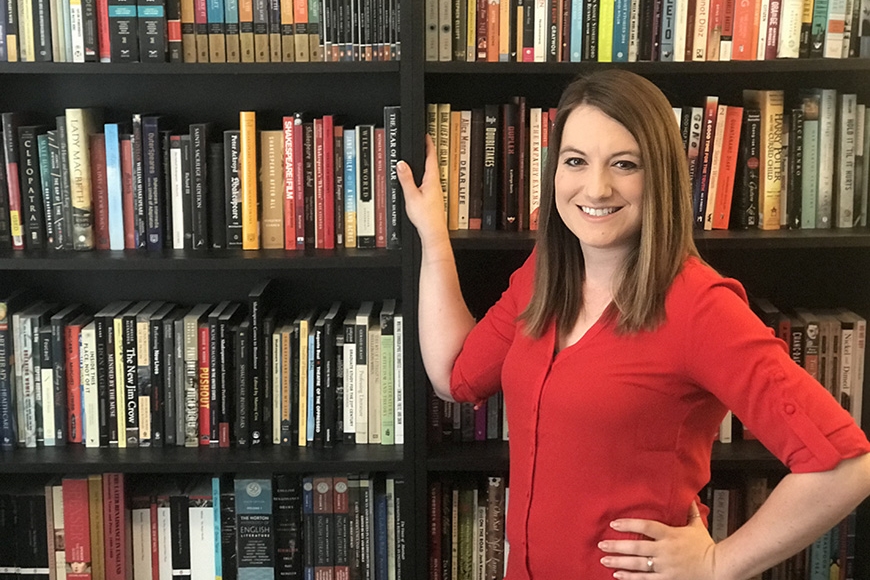 During her first semester as an English graduate student, Jenna Dreier went to see a Minneapolis production of Romeo and Juliet by Ten Thousand Things Theater Company. "When the director, Michelle Hensley, came out to introduce the show, she explained that this performance would be different from other theater we had seen," Dreier recalls. "For one thing, the lights would stay on, because each touring show was designed to be performed in prison, where turning down the lights was entirely prohibited."

Fascinated, Dreier started researching performances of Shakespeare in prison. Eventually, she received the University's competitive Graduate School Doctoral Dissertation Fellowship for 2019-20 to complete "'As you from crimes would pardoned be': Prison Shakespeare and the Practice of Empowerment," the dissertation informed by that research. This fall, she was awarded the department's Samuel Holt Monk Memorial Prize for Published Scholarship with "From Apprentice to Master: Casting Men to Play Shakespeare's Women in Prison" (included in a special issue of Humanities on "Humanities in Prison"). Dreier also won this year's English PhD Graduate Student Teaching Award.

"Were these programs empowering
the incarcerated men and women
who chose to participate, or were
they suggesting that people who
are incarcerated can be 'reformed'
by studying canonical literature?"

Did a certain professor significantly nurture your project?

The semester after the Ten Thousand Things performance, I encountered several other examples of Shakespeare prison performance in Katherine Scheil's "Global Shakespeare" seminar. I learned that there were programs like this all over the country (as well as in other countries) and that the community was growing steadily (they now hold a conference every other year specifically for facilitators of Prison Shakespeare programs). I found the topic gripping because, on the one hand, it appeared to be a space in which the study and performance of Shakespeare was literally transforming people's lives, but on the other hand, it raised some uncomfortable questions. Were these programs empowering the incarcerated men and women who chose to participate, or were they suggesting that people who are incarcerated can be "reformed" by studying canonical literature? I had no idea how to answer that question, but I decided that I would dedicate the next five years to finding out.

In addition to the discoveries I made in her "Global Shakespeare" seminar, Professor Scheil has also been an incredibly supportive advisor and mentor for this project. Beyond meeting with me routinely to discuss ideas and answering countless emails, she also holds regular work-in-progress sessions for her current advisees, which help ensure that we're continuing to produce new work and allow us to gather preliminary feedback on those super early drafts we wouldn't want anyone else to see. [Hear Professor Scheil talk about how Shakespeare's works have long been a part of civic life.]

That summer I traveled to Detroit to research the Detroit Public Theater's Shakespeare in Prison Program (SIP). I visited the Women’s Huron Valley Correctional Facility (WHV) to see the women's final performance of Macbeth, which was the culmination of the ensemble's nine-month process of studying, discussing, and rehearsing the play. Witnessing the performance was exceptionally fruitful for my understanding of the ensemble, their environment, and their interpretation of Shakespeare's tragedy. Although the Michigan Department of Corrections had denied my application to interview members of the ensemble, during my interview with the program's lead facilitator, Frannie Shepherd-Bates, I learned that several returned citizens who were alumni of SIP were interested in sharing their experiences with me. After obtaining IRB approval, I had a chance to interview these women over the phone, so I can now ensure that participants' voices will be represented.

I also traveled to Massachusetts, where I visited the home of Jean Trounstine, the facilitator of the original Shakespeare Behind Bars program that operated from 1988-1996 at Framingham women's prison. Trounstine assisted me with viewing her personal archives of the performances. She also spoke with me at length on the institutional barriers that the group faced throughout its history, before being shut down.

The Dissertation Fellowship allows a year off from teaching responsibilities. But you've taught multiple classes here, and just won an award for your teaching. What do you enjoy most about it?

When I hear Prison Shakespeare participants say things like, "I never thought I'd be smart enough to sit and have this kind of discussion about a book like this," it reminds me of some of the most joyful moments I've had in my own classroom when a student who started the class with considerable anxiety about their abilities makes a breakthrough, and realizes that something they had deemed "too difficult" has become something they are comfortable with. Whether it's a college student or a student in a Prison Shakespeare program, that person is being reminded of their talent and intellect. Suddenly, Shakespeare is something that belongs to them. I cherish those moments.

What have you appreciated most about your studies here at the U?

The best part has been the people I have met in the PhD program—smart, talented, motivated people who are so passionate about higher education that they are powering through six or more years of graduate study. Having them as a support system throughout this process is an experience I would never trade.