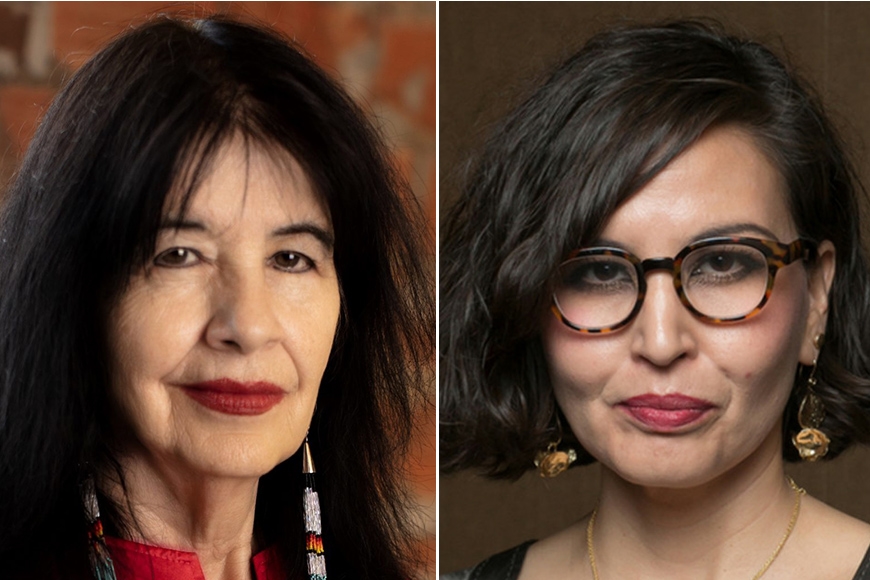 Joy Harjo (left) and Layli Long Soldier
We look forward to seeing you at our next free event at the University of Minnesota campus, as the author series that began in 2001 continues to explore literature and the humanities.

Join the Department of English at 7:30 pm on October 19, 2022, as the Esther Freier Lecture Series presents former US Poet Laureate Joy Harjo and and National Book Critics Circle Award-winning poet Layli Long Soldier reading from and discussing their poetry. American Indian Studies Associate Professor Christopher Pexa will moderate this conversation about contemporary Native American poetry. Co-sponsored by the Department of American Indian Studies.
This in-person event is free and open to the public. Free tickets are available. For questions about accessibility services and the venue, please email sutt0063@umn.edu or call 612-626-1528.
Joy Harjo is a performer and writer of the Muscogee (Creek) Nation. In 2019, she was appointed the 23rd United States Poet Laureate, the first Native American to hold the position and only the second person to serve three terms in the role (2019-2022). Harjo’s nine books of poetry include An American Sunrise, Conflict Resolution for Holy Beings, How We Became Human: New and Selected Poems, and She Had Some Horses. She is also the author of two memoirs, Crazy Brave and Poet Warrior, as well as the new Catching the Light (Why I Write): A Lyrical Meditation on Writing Poetry (Yale University Press, Oct 4). She has edited several anthologies of Native American writing including When the Light of the World was Subdued, Our Songs Came Through—A Norton Anthology of Native Nations Poetry, and Living Nations, Living Words, the companion anthology to her signature poet laureate project. Her many writing awards include the 2019 Jackson Prize from the Poets & Writers, the Ruth Lilly Prize from the Poetry Foundation, the 2015 Wallace Stevens Award from the Academy of American Poets, and the William Carlos Williams Award from the Poetry Society of America. She is a chancellor of the Academy of American Poets, Board of Directors Chair of the Native Arts & Cultures Foundation, and is artist-in-residence for the Bob Dylan Center. A renowned musician, Harjo performs with her saxophone nationally and internationally; her most recent album is I Pray For My Enemies.
Layli Long Soldier is a writer of the Oglala Lakota Nation. She is the author of the chapbook Chromosomory (Q Ave Press, 2010) and the full-length collection Whereas (Graywolf, 2017), which won the National Books Critics Circle Award and the PEN/Jean Stein Book Award and was a finalist for the National Book Award. She was awarded a National Artist Fellowship from the Native Arts and Cultures Foundation, a Lannan Literary Fellowship for Poetry, and a Whiting Writer’s Award. Long Soldier's 2012 participatory installation, Whereas We Respond, was featured on the Pine Ridge Reservation. She has been a contributing editor to Drunken Boat and poetry editor at Kore Press.
Christopher Pexa (Bdewakantunwan Dakota) is the author of Translated Nation: Rewriting the Dakhóta Oyáte (University of Minnesota Press, 2019), winner of the 2020 MLA Prize for Studies in Native American Literatures, Cultures, and Languages and the 2019 Labriola Center American Indian National Book Award. Pexa is Associate Professor American Indian Studies at the University of Minnesota.
Masks encouraged. Staff and visitors attending in-person events are asked to self-screen for COVID-19 symptoms using the Stay Safe MN Health Screening Checklist. Staff and visitors are reminded to wash hands often, get tested, and stay home when ill or exhibiting symptoms of COVID-19.
More author readings are offered through our creative writing program's Edelstein-Keller Visiting Writer Series.

The literary legacy that Esther Freier envisioned began in 2001, when celebrated novelist and essayist Jamaica Kincaid inaugurated the Esther Freier Endowed Lecture in Literature series. A clinical laboratory chemist and professor, Freier had a deep and profound love for literature and the humanities. She wanted to leave a legacy that would benefit the public and inspire emerging authors. In her will, Freier created an endowment that would bring prize-winning national and international authors to campus for free, public lectures and informal visits with students.

Esther Freier was born in Hibbing, Minnesota, in 1925. She moved to Minneapolis while still a child and spent her entire academic (BS ‘46, MS ‘56) and professional career of 45 years at the University of Minnesota. She co-authored the first paper dealing with quality control in clinical chemistry, winning several awards. When she retired in 1991, she held the only endowed professorship in medical technology in the nation. That year, Freier served as the first woman president of the Academy of Clinical and Laboratory Physicians and Scientists and was re-elected the following year.

Esther Freier was a teacher, friend, and mentor to many. The Department of English is deeply grateful for her generosity to us, the University, and the community.