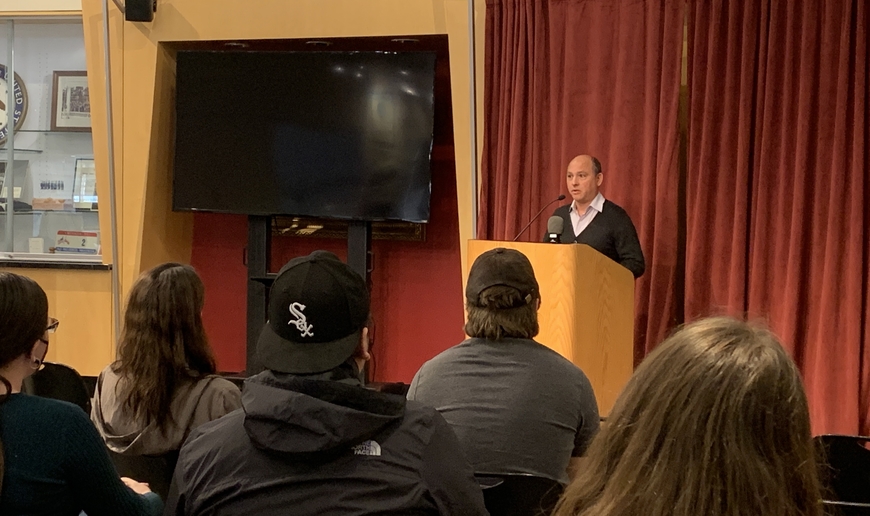 On Monday October 3, 2022, the University of Minnesota was pleased to welcome Christian Courtis, Gender and Women’s Rights Adviser for the Office of the UN High Commissioner for Human Rights in New York, into our campus to speak about Gender Equality in the UN Agenda.

Mr. Courtis previously worked on sustainable development issues, economic and social rights, equality and non-discrimination, the rights of older persons, and human rights mainstreaming. Born in Argentina, he is a former law professor at the University of Buenos Aires Law School and he has been visiting professor and researcher at different universities in Europe, Latin America, and the United States. He has served as a consultant for the World/Panamerican Health Organization, UNESCO, the UN Department for Economic and Social Affairs (DESA), the Economic and Social Commission for Latin America and the Caribbean (ECLAC) and the Inter-American Institute for Human Rights. He has also served as an expert witness before the Inter-American Court of Human Rights and was previously the coordinator of the Economic, Social and Cultural Rights Project of the International Commission of Jurists (Geneva).

With the help of visiting human rights engaged scholar Professor Diana Quintero, the Center on Women, Gender, and Public Policy and the Human Rights Program invited Mr. Courtis to speak about how gender issues have evolved in the UN context since its formation in 1948. Through the development of normative frameworks, gender equality has found a permanent place in the UN since the creation of the Convention on the Status of Women in 1947, which dismantled the prior terminology of les droits de l'homme or “the rights of men” as “human rights,” departing from its original, non-inclusive conception in the French language. 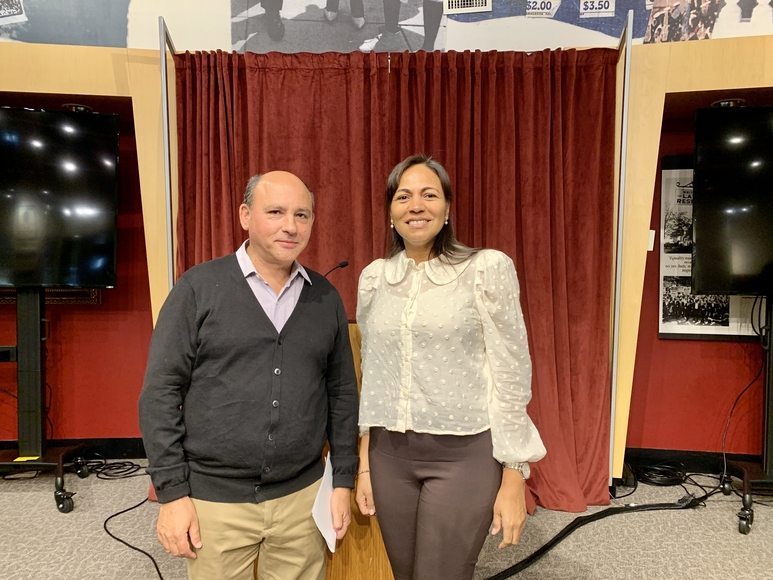 The Convention on the Elimination on All Forms of Discrimination Against Women (CEDAW) has made huge strides in the world conferences that have taken place since its  ratification in 1979. Gender equality is an issue that continues to permeate the structure of the UN through various means and modalities. For instance, different UN bodies now have specific structures on how to deal with gender equality issues including General Assembly’s resolutions on indigenous women, trafficking, and child and forced marriages, as well as the Security Council’s resolution (S/RES/1325) on women and peace and security, which underscores the necessity of women in peace/peacekeeping processes, conflict-based violence, and women’s participation in the post-conflict reconstruction period.

Courtis also discussed other UN bodies that more directly relate to gender equality and how they are pushing this agenda. The Commission on the Status of Women incorporates a different focus each year, tackling progressive issues and content. Independent experts on the Committee on the Elimination of Discrimination against Women engage in an annual periodic review of state’s compliance with CEDAW, helping to reinterpret the convention where new issues become relevant. This process includes a dialogue with states regarding the implementation of the provisions of the convention and offering guidance on the content and different clauses of the treaty. For instance, redefining and reshaping the issue of violence against women and how it should be seen as an obligation of state parties to respect, protect, fulfill, and promote these rights. Finally, Courtis mentioned the many mandates of the Human Rights Council, including the Special Rapporteur on Violence Against Women, the Working Group on Discrimination Against Women, the Special Rapporteur on trafficking, and many other entities that engage with gender within their work.

One of the most important things that Courtis mentioned in his lecture, was how gender equality has promoted the idea of standard-setting that goes beyond UN treaties and bodies. Respectively, there are required courses and training that people need to complete before becoming regional advisors which result in higher degrees of accountability Overall, these steps have enhanced the development of additional indicators to assess the performance of UN representatives. In general, more officials have adopted a gender differential perspective into their work..

The topics through which gender equality is being brought up in the UN are relevant to some of the larger issues on the human rights agenda. Courtis explained that the UN is spending time assessing countries with discriminatory laws and recommending ways in which anti-discriminatory laws can help further gender equaity. Capacity building is also an essential step in erasing gender discrimination, as observed in other instances of discrimination. Helping to instill gender perspectives in the minds of judges and police services is an essential step in ensuring justice, while also developing services that cater to the specific needs of women, especially sexual and reproductive healthcare rights. More directly though, equal representation of women in legislative bodies means there will be equal participation in political decision-making. But Courtis emphasizes the need to pay special attention to attacks on women leaders in the political sphere. Finally, there has been more and more attention paid to labor that is underpaid and furthers the full inclusion of women in the formal labor market. 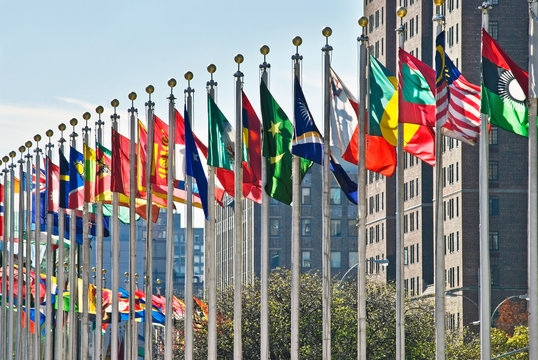 Courtis ended his talk by enumerating a few challenges that are posing a threat to gender equality in the UN today. Most notably, the increased polarization in the UN–for example, that caused by the war in Russo-Ukrainian War and the Trump administration which lead the UN to defund sexual and reproductive health programs–has made it difficult to implement certain agendas in the Security Council under the threat of a veto and imperil attempts at unbiased and neutral initiatives on gender equality within the UN.

Along with his public talk on Monday, students had the opportunity to engage with Courtis in their seminars throughout the week. In visiting professor and human rights engaged scholar Diana Quintero’s Intersectionality, Ethics, and Global Health Rights course, Courtis spoke about a specific case from the Inter-American Court of Human Rights dealing with the Workers of the Fireworks Factory in Santo Antônio de Jesus vs. Brazil. This case deals with gender equality interactions with labor rights. The class was able to take a deep dive into this case study and learn about how intersectionality plays an important role in the victims’ identities and therefore, the rights in question, according to a leading expert on the topic. Courtis also engaged with students in Amanda Lyons’ law school class on Poverty and Human Rights, discussing ways in which poverty and economic inequality arise in his work; and with Janet Walsh’s Master of Human Rights (MHR) cohort seminar, offering helpful information related to his professional development and trajectory.

The Center on Women, Gender, and Public Policy and the Human Rights Program are grateful to have had such a renowned expert visit our campus and connect with students, faculty, and community members on the subject of gender [in]equality in the UN agenda. This inspires us to reaffirm our commitment in preparing our students to further their efforts in making our world more equitable, accessible, inclusive to all. Many of our students have the opportunity to witness and participate in forums like the UN and the OHCHR, bringing to the table diverse perspectives, and epitomizing the human rights-centered values promoted by the Center, the Program and our affiliated partners.

The full video of Courtis' talk is available on youtube. 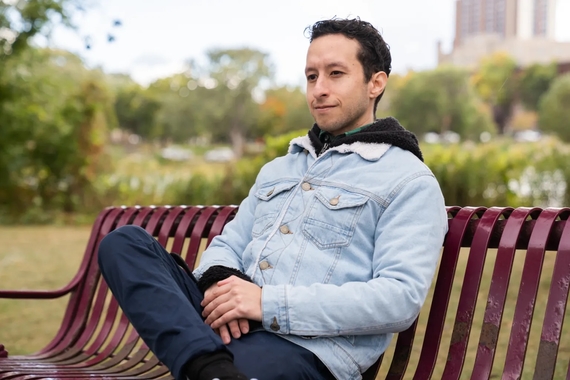 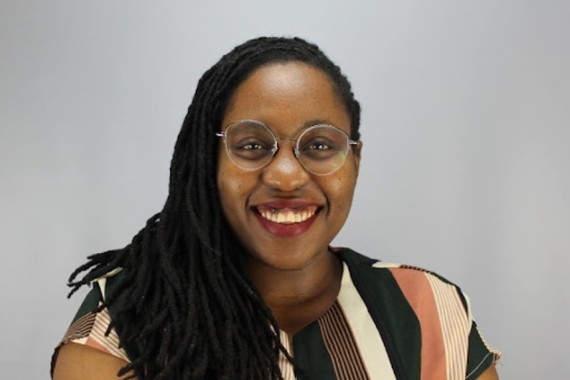 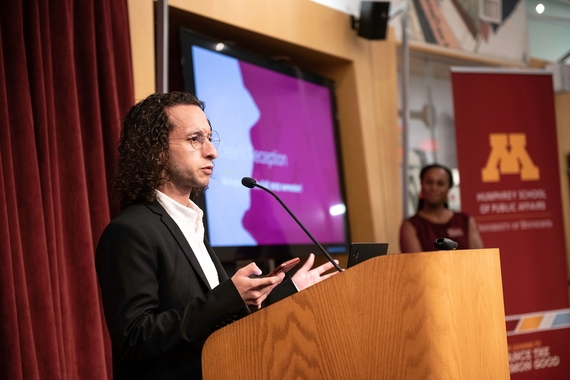