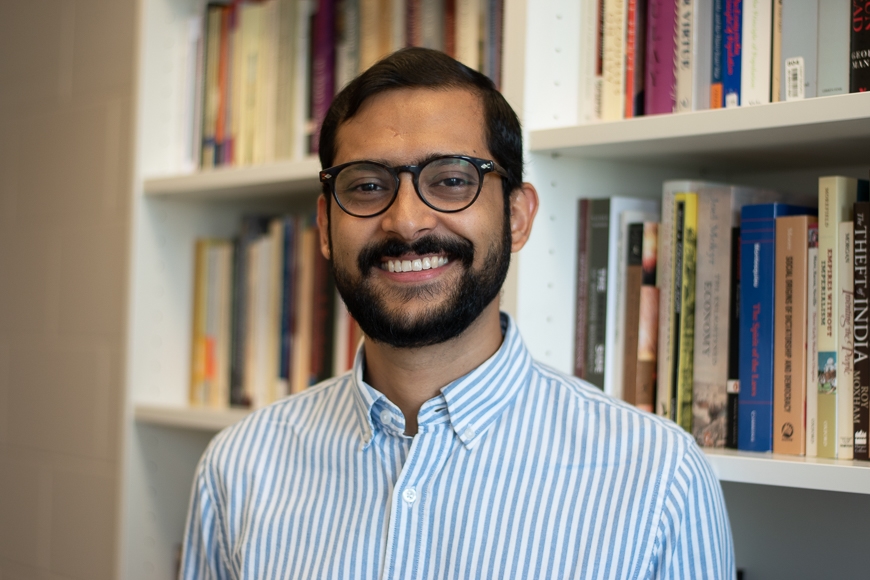 How can we shift the focus of imperialism back to the colonized? What role does political thought have in studying the practices and legacies of colonization? Assistant Professor Anurag Sinha explores these ideas in his research.

What brought you to the U?

I’m from Kolkata, India, where I also went to college at Jadavpur University. Since then, I’ve lived a peripatetic life, arriving in Minneapolis by way of New Delhi, London, New Haven, Oakland, and Cambridge. I’ve come to the U as an assistant professor of political science. I will teach courses in the history of political thought, political theory, economic thought, and South Asian intellectual history.

What do you cover in your research?

I’m a historian of political thought, and thus I’m interested in both where ideas come from and how they are received and refashioned. But I’m also a political scientist, which makes me very interested in institutions—how they were built, how they have changed, how people think of them today. In my research, I try to bring these two interests together.

The conventional story of modernity is that ideas and institutions traveled from Europe to the rest of the world. European imperial expansion was obviously the chief vehicle of this transformation. However, this perspective omits the very messy interactions and exigent practices of imperial government, which, in turn, produced many ideas and institutions that reverberated back to Europe.

I take a practice-oriented research approach, which illuminates the indispensable role of colonized peoples in the production of modern political ideas, while making it impossible to legitimately claim these ideas as exclusively British or Indian or European.

One way I’ve come to this perspective is by studying the commonplace contemporary association between national poverty and large populations. In the eighteenth century, large populations were an indicator of national wealth. Why did this view change? My research finds that it was principally because of the British experience of tax collection in India during the late-eighteenth century. And that’s the subject of my first book.

What drew you to study this topic?

Growing up in India, it was clear to me from an early age that political independence for the country (from the British Empire) did not necessarily mean social freedom for its people. This, of course, is an obvious point, but it is so self-evident that we tend not to always remain sensitive to its profound implications.

I went to graduate school wanting to study the conceptual distinctions between freedom and independence, especially in the Indian context. I realized very soon, however, that to say something meaningful about freedom in India would mean saying something about its major institutions of government.

As I began to peel back the layers of India’s institutional history, I landed in Bengal during the second half of the eighteenth century, where the English East India Company was conducting many ad-hoc experiments in imperial government. India still retains many of the institutions produced by the Company at this time, principally its district administration structure. So that’s where I started my research.

What other research projects are you working on?

In a previous life I used to write on India’s foreign policy, especially the post-Cold War period. Right now, I have too many unfinished projects. Apart from my book, I’m also researching ideas of imperial federation at the turn of the twentieth century; the history of commodity boycotts as a form of political protest; French thought on British India between 1770 and 1860, which includes translations of Voltaire’s and Tocqueville’s writings on India; and property rights as despotic institutions in late-eighteenth century Bengal.

I have two longer-term projects in mind. First, to write about the legacies of the idea of the “Asiatic mode of production.” Second, an intellectual biography of Syed Mujtaba Ali, a remarkable scholar and educator from Bengal.

What do you want your students to get out of your class, Revolution, Democracy, and Empire: Modern Political Thought?

That the ideas we’re reading about have endured many turns of history and remain as relevant for us today as they were upon first printing. If we want to understand the stakes of contemporary politics, we would do well to read these ideas seriously. That’s also why I end my lectures every week by talking about why the ideas matter for us today.

What are you looking forward to at the U?

I’m excited to learn from my brilliant colleagues in political science and other departments across the CLA, as well as the amazing students at the U, many of whom have already taught me a great deal about Minnesota.

I’m also thrilled to make use of the many wonderful resources at the U, especially the Ames South Asia Library, which really is a gold mine for someone with my interests.