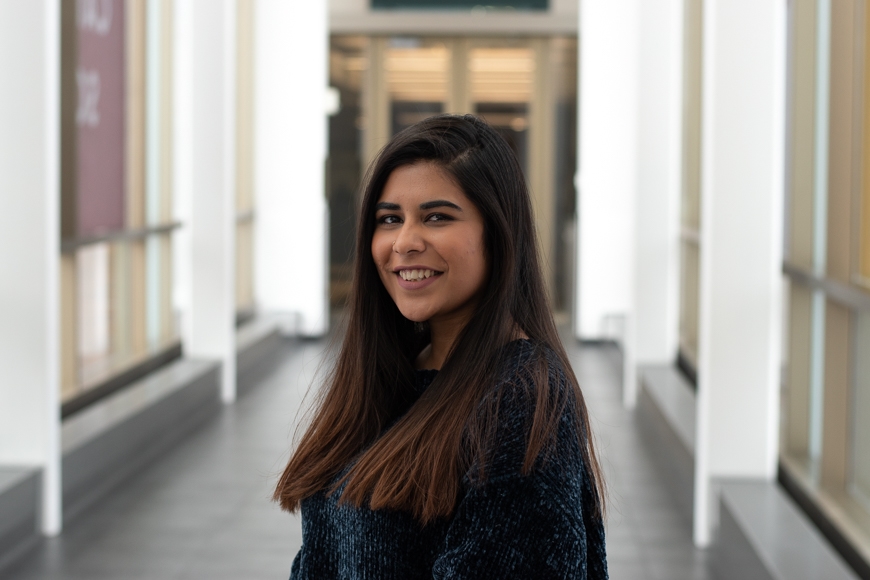 Undergraduate Zuhrat Inam’s love for political science stems from her fundamental belief in doing good. Inam is inspired by her mother’s words: “Everyone has something to give to the world; something bigger than just yourself.”

When Inam first came to the University of Minnesota, she was prepared to get a degree in economics. Then she enrolled in a political science class to fulfill a liberal education requirement. Professor Ronald Krebs' Global Politics course opened her eyes. “That was the deciding factor for me,” Inam admits, and she declared a second major in political science soon after. She has since taken two more courses with Krebs: Consequences of War and International Conflict and Security.

As an international student from Bangladesh, Zuhrat understands the larger importance of what she does. She believes that her origins in the global south affect how she approaches world issues, noting that “it’s really easy to stay on this campus and be like, ‘life’s great.’ And maybe it is for you, but it certainly isn’t for everyone. I have seen that firsthand.” Growing up, Inam’s mother was the country director for an international nongovernmental organization (INGO) called Dan Church Aid, and she is now the country director for another INGO called BRAC Uganda. Both INGOs dealt with humanitarian aid and international development, and her mother’s career exposed Inam to social inequalities and the ways ordinary people can help. “We in the US are sitting halfway around the world, and we tend to be detached from it,” Inam explains, “but everyone has a role to play to help others.”

During her DURIP, Inam assisted Creamer with research pertaining to World Trade Organization (WTO) disputes, and how countries implement the WTO’s rulings into their domestic legislation. “The research I did with her really hit home,” Inam says, “how international rulings can have an effect on domestic politics.”

As an operations and advocacy intern, Inam helps with public relations and research. Inam typically researches a topic that is used to create articles for the World Without Genocide website. Currently, Inam is studying the alarming cases of missing and murdered indigenous women in the US and Canada.

Annually the nonprofit also publishes a historic calendar of events, with this year’s topic being the Nazi war crimes trials following World War II. Inam’s research on this project included finding the prosecutors involved and gathering information on different Nazi trials that happened globally. Inam’s duties also include operational tasks that have taught her as much as the research. “My supervisor [told me], ‘When you say human rights, you think it’s a very glamorous thing to do. But there are so many things that go behind it,’” Inam explains. “I think that’s really what I’m learning here.”

Her internship at World Without Genocide has only reinforced her future plans. “You know how they say you have a calling in life? As cliche as that is, this is what it is for me: advocacy and policy design and research in these areas,” Inam says.

As for the future, Inam has already applied to several PhD programs for political science, primarily focusing on humanitarian intervention, human rights conflict, and how the world reacts to it—or doesn’t.

Regardless of what comes next, Inam has an unyielding mission to humanize her work. “The human part of it really appeals to me. You know, we talk in numbers, and figures, and statistics. But we tend to forget that these are real people.”