Poli Sci Freshmen Learn from the Voters of Frogtown 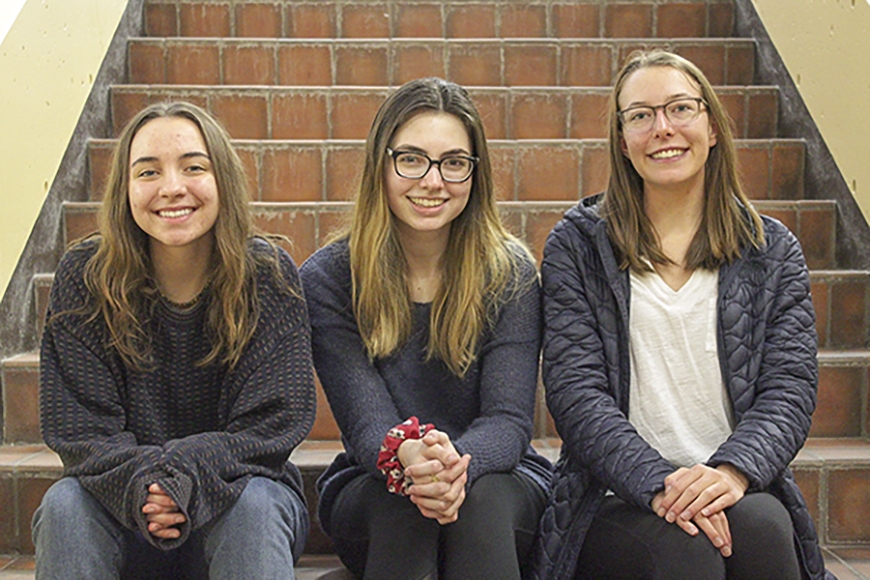 Freshman seminars are a great way for new college students to explore their interest in a topic and connect to the opportunities that life on the UMN Twin Cities campus offers. Each seminar is capped at 20 students, so students can connect with a faculty member and their fellow students in a more personal way. Professor Scott Abernathy’s fall 2018 freshman seminar, Generation Now: Young Adult Political Action, combined classroom learning, engagement with community groups, and fieldwork among voters in St. Paul’s Frogtown neighborhood.

The class was designed to have the students use “the tools of policy analysis to become more capable actors within the American political and policy space.” The point of the course was to not simply explore the problems of low voter turnout and barriers to voting but to determine some ways to solve them.

Isabella Wartzenluft, Kelsey Weddig, and Victoria Nikonov, three of the freshmen in Abernathy’s class, had incredible experiences through their class projects.

Wartzenluft says that the project gave her “the opportunity to get involved in policy and politics in a way I never thought I’d have the chance to do during my freshman year.”

During the first half of the course, leaders of community groups such as the Asian American Organizing Project, the Aurora-St. Anthony Neighborhood, the St. Paul Promise Center, and Model Cities St. Paul spoke with the students. They had in-depth discussions about the criminal justice system, homelessness, and barriers to voting and civic engagement. The conversation with Model Cities St. Paul was especially important to Weddig. “[We discussed] why youth of color don’t vote in high numbers. As a majority white class, it was important to hear,” Weddig says.

Listening to the stories and experiences of residents of the Frogtown neighborhood of St. Paul helped to prepare the students to conduct exit polling on Election Day 2018. So did the work they did early on, polling fellow students at the University of Minnesota about their political participation. According to Nikonov they “used this information to come up with questions for our exit poll surveys.”

Although the start of their work on election day was “nerve-racking,” according to Weddig, “the work we were going to do was incredibly important. It felt really good to do something that we knew would have an impact on such an important day as election day.” According to Abernathy the students “dove right in, professionally and enthusiastically.”

Frogtown is a diverse neighborhood and some of the voters weren’t able to fill out the survey due to language barriers. One voter who declined to fill out the survey still spoke with the student-pollsters and according to Nikonov, “enthusiastically told us about his experiences and why he felt it was important to vote.” Wartzenluft was “beyond excited to hear his stories.”

Turning the Findings into Action

The work the students put in wasn’t just an intellectual exercise. The class presented their findings and recommendations to voting officials from Ramsey County and the Resilient Communities Project. They collected data from 240 voters on election day giving their data set statistical significance. Four teams presented the key themes they learned from their analysis, as well as action items intended to increase voter turnout among young people and communities of color.

While social media has been in the news as a tool to delegitimize elections, another team showed social media to be an important source of information about political candidates and issues for young people and presented on how digital storytelling could promote voting. The student pollsters concluded that Facebook and Instagram could be used to showcase video profiles featuring Ramsey County residents speaking about civic action and responsibility.

The findings the students presented convinced Abernathy “outreach and listening to voters” is of critical importance and that “it’s clear that residents want to be listened to, and not just when they vote.”