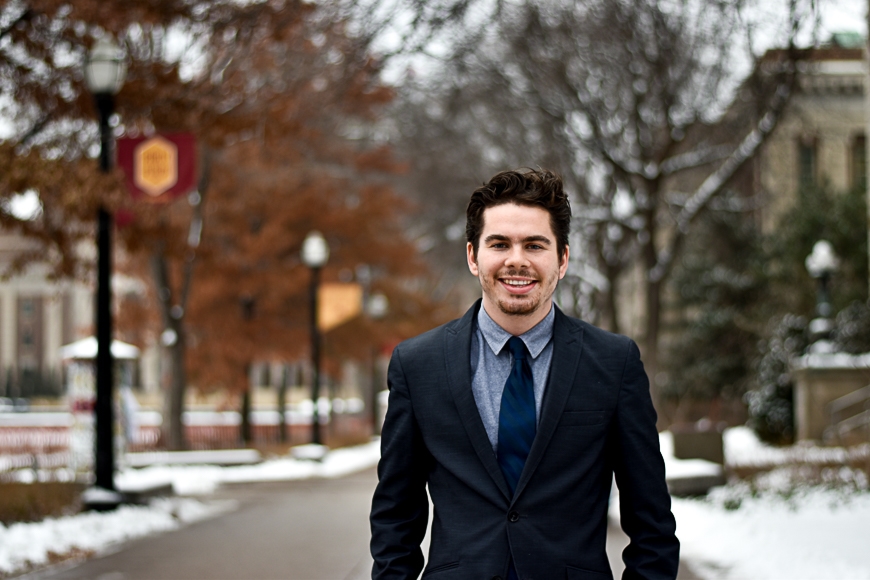 “Government is really complex. And the solutions to some of our biggest problems—climate change, refugee crises, health care—all require an analytical mindset.” For senior Simon Brown, a scientific approach to politics is an important aspect that he feels isn’t often thought about.

When he started his studies at the University of Minnesota, Simon Brown didn’t picture himself studying politics.

“I came into college wanting to be a doctor but then got hooked on politics during the 2016 election and decided to add the political science degree. But I'm still fascinated by the human body, so I stuck with the neuroscience.”

Brown, who is pursuing a joint program in the College of Liberal Arts and the College of Biological Sciences, started out by working in a neuroscience lab under Dr. Marilyn Carroll, where he studied the effects of drug addiction and relapse using rat models. This experience helped him think analytically as he had to identify a problem, address the sequence of events that led to the cause, and find a solution. This mindset is something he applies to his political work, too, as he believes public policy often lacks an analytical approach.

Inspired by the results of the 2016 presidential election, Brown worked on former St. Paul Mayor Chris Coleman’s gubernatorial campaign and was a paid canvasser for Omar Fateh, who ran for Minnesota’s State House District 62A. In addition to these campaign experiences, Brown also worked for Governor Mark Dayton, learning how the legislative and the executive branches interact, and how politicians persuade and advocate for programs and funding that are important to people around the state.

Although he has followed his interest in politics deeply, Brown isn’t letting go of his neuroscience degree. He believes that these degrees actually work quite well hand-in-hand.

“I'm not going to necessarily pursue a career related to neuroscience, but I'm hoping that the analytical mindset I've developed through my studies will help me wherever I go in government or politics,” he explains.

Because of the scholarship, Brown was able to work in the office of US Senator Tina Smith this semester, and he plans to work either in the state legislature or with the DFL next semester. Without this scholarship, he may have had to focus “half of [his] time or more working a paid position, and possibly wouldn’t have been able to work with Senator Smith at all.”

“Overall, I think the best thing coming from the political science department is the professors. They're engaged, knowledgeable, and very friendly. I couldn't ask for more.”