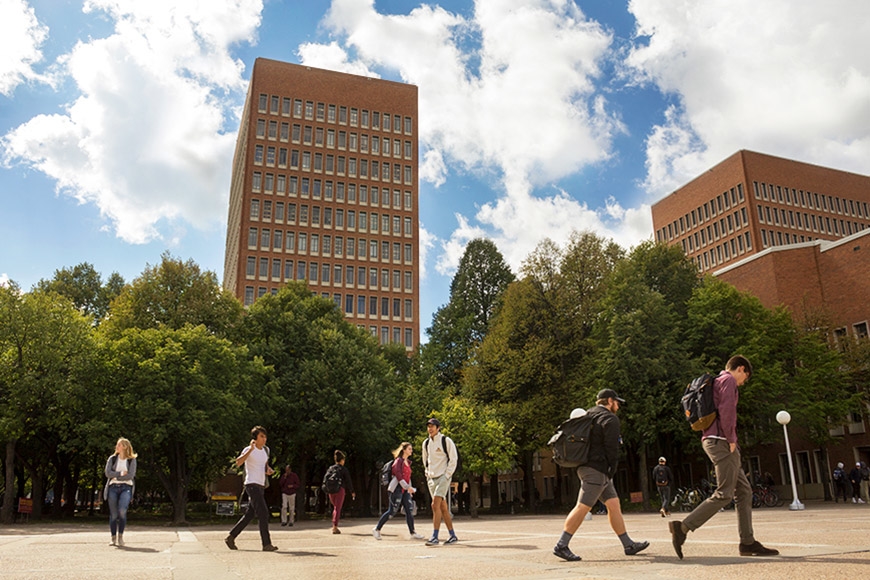 The Mulford Q. Sibley Grove on the West Bank campus.

Mulford Q. Sibley—described at various times as a giant of political thought, a Norman Thomas socialist, a Quaker pacifist, a tool of the Communists, and an agitator for a campus nudist club—was a popular and controversial professor of political science at the University of Minnesota from 1948-1982.

Sibley’s academic achievements were monumental, including literally writing the textbook Political Ideas and Ideologies in 1970. However, transforming the plaza north of the Social Sciences Building from sterile concrete—without a tree in sight—into the appealing green space that faculty, staff, and students enjoy today is one of Sibley’s enduring legacies at the University of Minnesota.

Sibley described the space as a “penal modern” architectural style that had a “prison yard” effect. Professor Emeritus Terence Ball remembers Sibley quipping, “All that’s missing are the armed guards in towers.”

He organized fellow professors and placed demands on University administration. His challenge to green the plaza was suddenly and dramatically accepted when workers with jackhammers cut diamond-shaped holes into the year-old concrete and planted saplings. Now the West Bank has a leafy, green, and inviting space to work and study. Sibley’s work turned the plaza into a “precious oasis in the midst of the concrete and bricks” that make up the West Bank, according to current University of Minnesota political science professor August Nimtz. Sibley’s work on the plaza was a precursor to his book Nature and Civilization.

What’s In A Name?

This year, the University of Minnesota Board of Regents approved naming the tree-shaded green space the “Mulford Q. Sibley Grove.”

Naming a space for the tolerant and open-minded professor would have been unthinkable in 1963, 15 years into his tenure. After he wrote a letter to the Minnesota Daily, the Minnesota legislature opened an investigation into whether the University had been permissive of students and faculty advocating for Communism, nudist clubs, and free love on campus.

The goal of Sibley’s letter was to advocate for academic freedom, free speech, and to argue that neither the state government nor University administration should tell the student body what to think.

In a half-joking vein he wrote, “Personally, I should like to see on the campus one or two Communist professors, a student Communist club, a chapter of the American Association for the Advancement of Atheism, a Society for the Promotion of Free Love, a League for the Overthrow of the Government by Jeffersonian Violence, an Anti-Automation League, and,” possibly the most objectionable to the groups that attacked Sibley in the wake of his letter, “perhaps a nudist club.”

This letter was reprinted around the state, and Milton Rosen, a city public works commissioner, opened a campaign for legislative action. State Senator Donald O. Wright moved for the legislative inquiry, adding other complaints against the University. Wright was upset that a “filthy, indecent, and immoral” short story had appeared in the campus literary magazine in addition to other Cold War Era-inspired charges. The letter and investigation became national news, even profiled in The New York Times.

The investigation ended up closing without incident, reflecting the fact that the legislature does not govern University of Minnesota faculty.

When he wasn’t fending off charges of Communism and indecency, Sibley was advising the Student Peace Union, giving popular lectures to enormous audiences, and mentoring graduate students who went on to successful careers. While some faculty members in the mid-70s advised then graduate student Kathy Ferguson against publishing the department’s first-ever dissertation on feminism, Sibley defended her decision. “He wanted me to thrive as a thinking person,” says Ferguson, now a professor and chair of the Department of Political Science at the University of Hawaii at Manoa, “because that’s what universities should offer to students.”

Sibley’s teaching was “legendary,” according to former student and current Northwestern professor James Farr. Hundreds of students would pack into a lecture hall during class or an outdoor space during a teach-in to “listen raptly to whatever or whoever was on offer.” Students heard, and were invited to participate in, lectures against the war in Vietnam, on human nature, Plato, Augustine, or Gandhi, as well as Sibley’s views on nature and the blind growth of technology and economy.

Even though Sibley retired from the University in 1982 and passed away in 1989, his popularity is still evident. According to a fall 2017 survey of 8,800 Twin Cities campus alumni, Sibley’s name was among the top 44 submitted to the fill-in-the-blank section: “Name one person affiliated with the University of Minnesota Twins Cities who had a significant impact on your experience as a student.”

According to Nimtz, organizer of the Sibley Grove campaign, Sibley’s “principled defense of freedom of conscience offers an instructive lesson for today.”