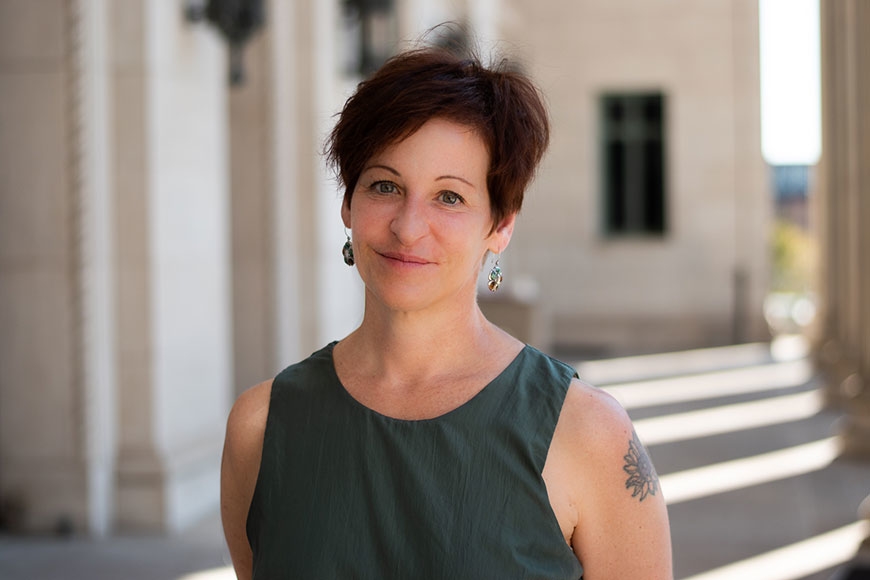 “I’m a feminist and a critical scholar. That’s why I got my PhD here, and that’s why I wanted to come back to the University of Minnesota.”

Associate Professor Helen M. Kinsella didn’t take the path of a “model scholar,” going straight from undergraduate studies to a graduate program, then becoming a professor. After obtaining a BA from Bryn Mawr College in Pennsylvania, Kinsella moved to Seattle and worked in domestic violence prevention and ran a children’s program in transitional housing. Later she moved to Minnesota to work with the St. Paul & Ramsey County Domestic Abuse Intervention Project as an advocate.

After contributing to developing a felony advocacy program, Kinsella wanted to do more in addition to being an advocate in the courtroom and on the street. Through the Masters of public policy program at the UMN Humphrey School of Public Affairs, Kinsella continued to focus on gender and violence.

As a Master’s student, Kinsella took an internship in Guatemala toward the end of that country’s civil war. While there, she learned about and worked with indigenous women who were active in the peace process and were confronting domestic violence. Later, as an assistant to the United Nations Special Rapporteur on violence against women, its causes and consequences and working in Sri Lanka, Kinsella studied violence against women in refugee, internal displacement, and armed conflict situations.

After working with Department of Political Science professors during her master’s program, Kinsella knew she wanted to continue her education at UMN. “At the time there were very few graduate programs that took gender and critical theory seriously, especially in international relations,” according to Kinsella, “but the University of Minnesota was an exception—and is still one of the few.”

Adding to the Literature

Working closely with international relations; political theory; and gender, women, and sexuality studies faculty, Kinsella earned her PhD and landed a faculty position at the University of Wisconsin-Madison. While there she published an award-winning book, The Image Before the Weapon: A Critical History of the Distinction Between Combatant and Civilian.

The impetus for this book came from her time in Central America doing field work in Guatemala and El Salvador. This, along with other cases and archival research, pointed to how discourses on gender, innocence, and civilization all play a part in how civilians and combatants are distinguished and treated during the armed conflict.

Image Before the Weapon won the Sussex International Theory Prize because of the particular way Kinsella combined international relations and political theory to examine a distinction people take for granted, one that crucially impacts people’s lives and livelihood. It also won another prize: Honorable Mention for the Lepgold Book Prize, The Edmund A. Walsh School of Foreign Service, Mortara Center for International Studies, Georgetown University.

After seeing an opening in the international relations subfield at the University of Minnesota, Kinsella was glad to come back to her alma mater.

Now Kinsella is working on a book investigating war and sleep. Kinsella posits that “nowhere more than sleep—the dreams and nightmares it enables, its interruptions by trauma, its failure to be interrupted by conscience, its categorization and manipulation as a military logistic—is the complexity of war’s effects illuminated.”

As in her previous work, Kinsella will draw on the political theorization of sleep to address its realities and use in war. The work will underscore how the “gendered micropolitics of war are anything but a minor part of war.” It also brings to the fore how “the very incapacity to sleep during war because of night raids, drones, 24-hour surveillance, and torture is an inhumane contemporary military strategy.”

In the Department of Political Science faculty and students can critically interrogate the intersections of power which has thus created a perfect fit for Kinsella’s path-breaking work in political theory and international relations.