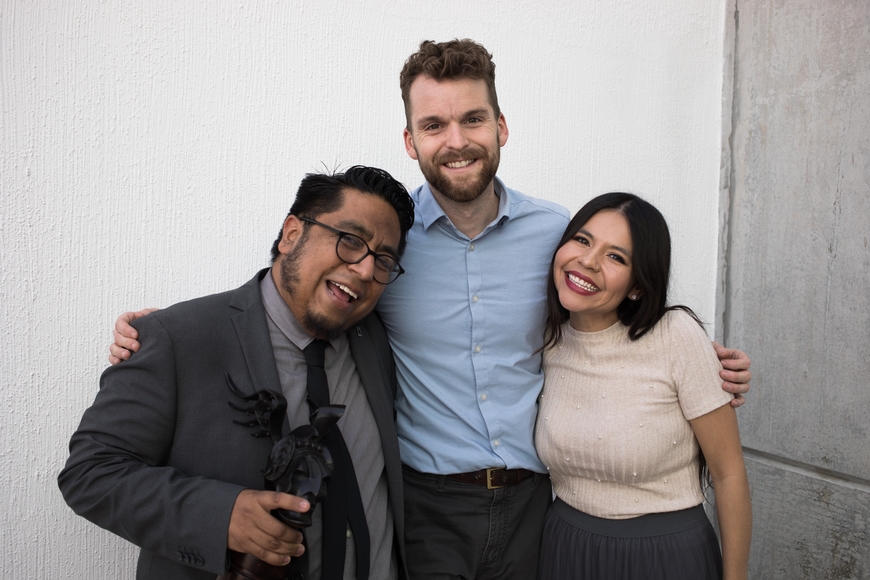 The Observatory on Disappearances and Impunity in Mexico is an international academic and advocacy collaborative established in 2015 to investigate, analyze, and combat patterns of impunity regarding enforced disappearances in Mexico. Its three principal investigators, HRP Director Barbara Frey, Professor Leigh Payne of Oxford University, and Professor Karina Ansolabehere of the Institute for Legal Research (IIJ-UNAM) and the Latin American Faculty of Social Sciences (FLACSO-Mexico) have been working with undergraduate students, graduate students and alumni to explain disappearances in México as a means to bring an end to this terrible pattern of human rights violations.

This spring the Human Rights Program will publish a comprehensive web-based report and database discussing the UMN-based team's component of the project. The virtual launch of this website and the Human Rights Program’s findings will take place on Thursday, April 22 at 12:00 Central Time. Leading up to the report release, this three part series shares three blog posts by key members of the Observatory team. This second blog installment by Hunter Johnson covers his documentary Until We Find Them. The blog entries were originally posted to Observatorio Sobre Desaparición E Impunidad En México in Spanish and English. The English version is being reposted here with permission from the Institute for Legal Research at UNAM and FLACSO-México.

While creating English subtitles for my documentary  project  (consisting  of  two  short  films), something  quite  peculiar  happens:  My  computer  intervenes.  “He  was disappeared”  is not grammatically correct, it tells me. The words are autocorrected to “He disappeared.” Certainly I must have made an error, my computer assumes.

“People are disappeared” isn’t accurate either, it figures, changing the words to “People have disappeared.” As I translate the words spoken by the films’ subjects -family  members  of  the disappeared,  State  Search  Commissioners,  independent  journalists -the  computer  continually corrects my “poor” grammar. And so, I must change it back; I must return it to the way they had intended when they shared their truths.

But why? Why can’t my computer understand what it means to be disappeared? 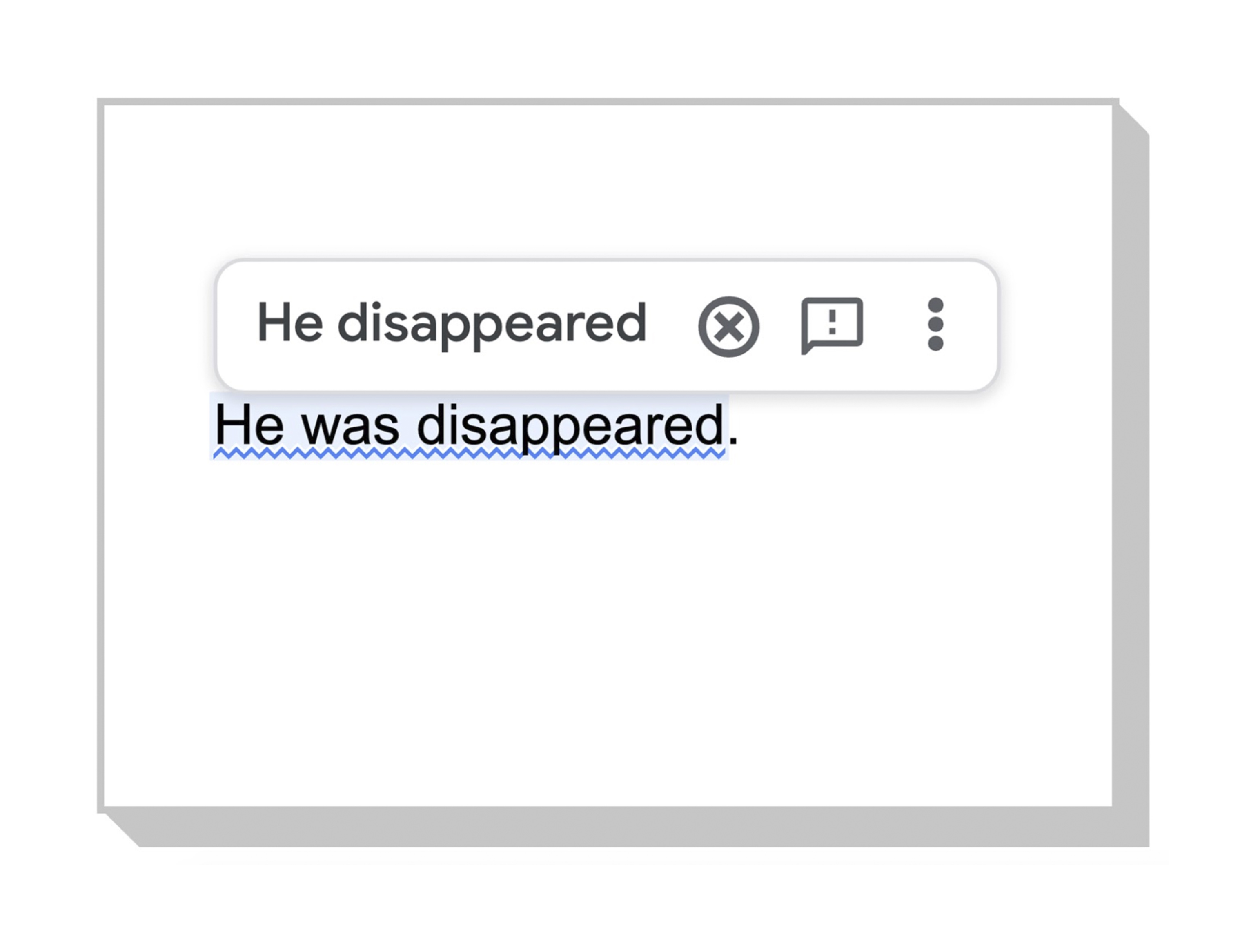 Example of my computer’s autocorrect

Because,  according  to  the  English  language, to  disappear is  more  commonly  defined  as  a mysterious occurrence that happens to someone, not a malicious act that one person commits against another.

In  this  seemingly-harmless  process  of  autocorrecting  the  words,  my  computer  unintentionally does  something  much  more sinister:  It  removes  all  responsibility  for  the  action.  My  computer assumes there is not a bad actor behind-the-scenes carrying out this grave human rights violation. It  assumes  that  this  horrific  crime  is  not  a  rampant  pattern  within  a  violent  context  in Mexico, characterized by widespread organized crime and government corruption. It assumes there are not  tens  of  thousands  of  families  engaged  in  a  perpetual  search  for  their  missing  loved  ones, mobilizing in the streets to demand action, truth and justice from their country.

My  computer's  misunderstanding  is  not  unlike  the  perplexity  many  people  outside  of  Mexico experience regarding the country’s ongoing crisis of enforced disappearances. People tend to have a vague and confused understanding of the nature of this crime, and of the immensity of its scale. Most have heard of the infamous Ayotzinapa case of the 43 disappeared students, as this gave rise to tremendous national mobilization and sparked outrage on an international stage. But beyond  this  atrocious  incident,  public  understanding  around  the  issue  of  disappearances  runs shallow outside of Mexico.

Curiosity and potential for solidarity, however, does not.

For the last three years, I’ve worked with the Observatory in several capacities. Working with Human Rights Program Director Barbara Frey at the University of Minnesota, I’ve joined a team of researchers to create a database of Mexican press articles on disappearances to study what information is provided to the public about these crimes. I’ve also contributed to a book chapter with Professor Leigh Payne from Oxford University that explores the use of visual images of the disappeared as a tool of power.

Mainly, my role has been one of a storyteller.  While most of our research at the University of Minnesota consists of large amounts of data, allowing us a bird’s eye view of the overarching patterns of disappearances, we also wanted to supplement this information with personal stories. As a filmmaker and photographer, I consult with our team to identify ways the Observatory can personalize and visualize its work; add a layer of intimacy and narrative through moving images; and help an international audience understand the crisis of enforced disappearances, not only as patterns or statistics, but also as true stories of real people with human faces.

Through  our  connections  with  FLACSO  and  other  Mexican  partner  organizations,  we  are connected  to  an  extraordinary  human  rights  community  consisting  of  individuals  who  have dedicated  their  lives  to  confronting  the  issue  of  enforced  disappearances.  A  few  of  these courageous  people  are  the  subjects  of  my  two  short  documentary  films  which aim  to  bring international  awareness  to  the  issue  of  disappearances,  and  highlight  the  important  work  of exceptional individuals who are confronting this injustice. 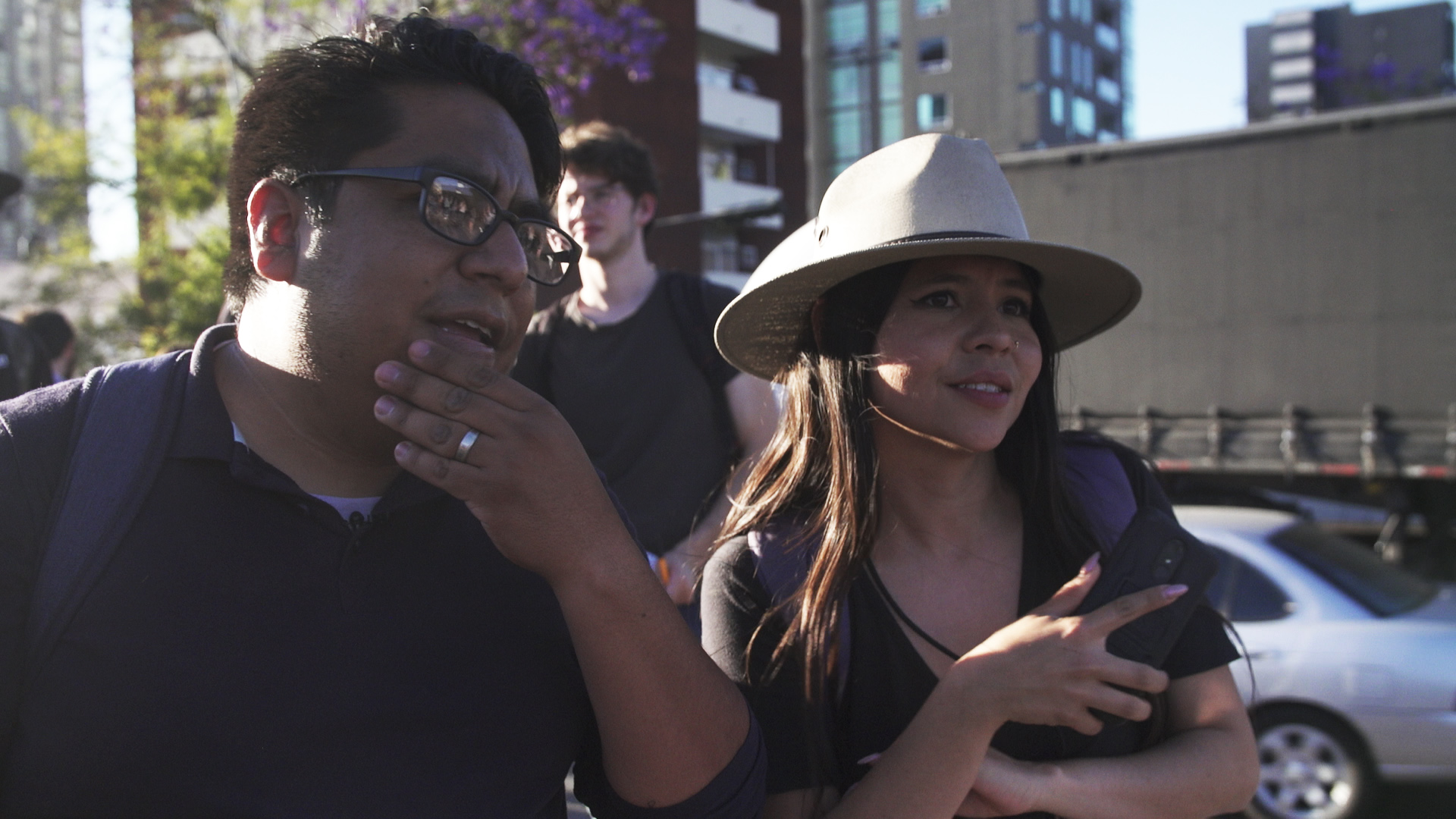 The  first  film  features  the  marriedteam  of  Darwin  Franco  and  Dalia  Souza,  independent journalists  working  with  ZonaDocs,  a  news  collective  with  a  human  rights  perspective  in Guadalajara. Darwin and Dalia conduct in-depth investigations into disappearances on a case-by-case basis, working closely with families and collectives to seek truth and demand justice. The second film is about Sol Salgado, the lead Search Commissioner in the State of Mexico. Sol leads one of the most effective search teams in the country. She works directly with family collectives to  launch  large-scale  searches  for  their  loved  ones.  She  does  so  with  great  professionalism, dedication, and empathy. 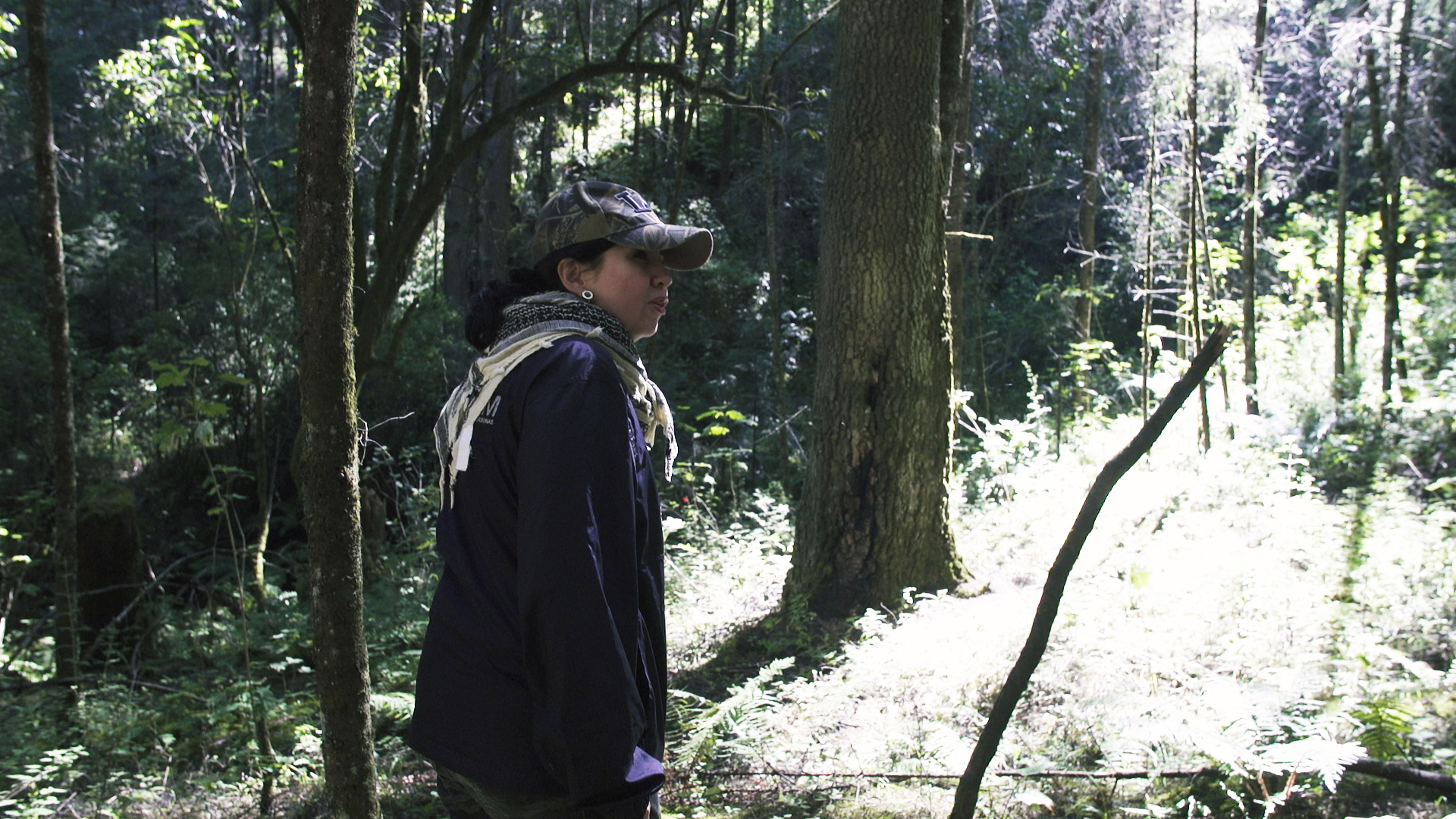 Throughout this process of filming and editing, I’ve encountered many challenges: Deciding what content  to  exclude  when  every  anecdote  carries  profound  informational  and  emotional  weight; shaping   a   narrative   which   accurately   encompasses   the   difficulties   faced   in   confronting disappearances,  but  also  one  which  will  not  overwhelm  audiences  into  a  state  of  inaction; balancing the suffering of the families with their tireless strength, motivation and dignity. In spite of the storytelling hurdles, I’m confident these protagonists are excellent vessels through which to  explain  the  crisis  to  newcomers,  while  also  serving  as  admirable  examples  of  passionate leaders who are relentless in their efforts to help families locate their loved ones.

The films are nearly completed. When I screen scenes of them to audiences in the United States, people become thoroughly engrossed by the issue. They feel concerned for the victims and their families. They are infuriated by the impunity that runs unabated. They are eager to learn more about our country’s own role in the crisis, and how they can help from afar. This genuine concern means there is a real opportunity to inform and engage a global audience, be that on the internet, in the classroom, or at human rights events around the world.

I’ve since adjusted my computer not to mistakenly autocorrect the subtitles of the films. And with these  stories,  I’m hoping  to make a  similar  change  in  the  consciousness  of an  international audience -helping them understand the nature of disappearances, to empathize with the victims and  their  families,  and  to  be  moved to action.  Because  heightened  international  solidarity  will assist in the most important task of locating all those who are missing, seeking truth and justice for the families, and assuring these violations will not be repeated.

View the trailer of Until We Find Them 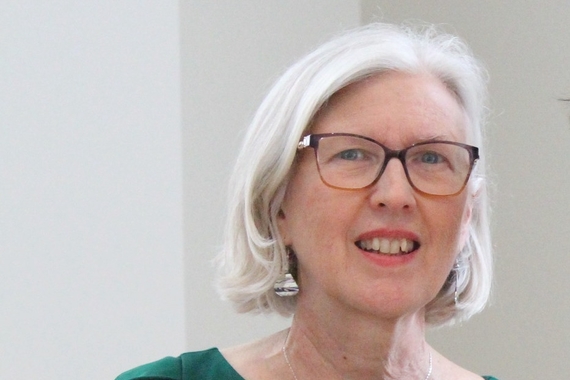 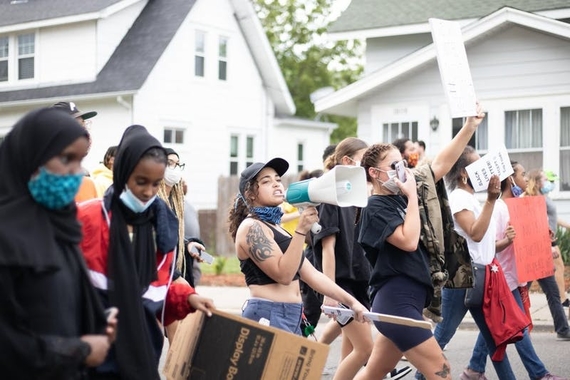 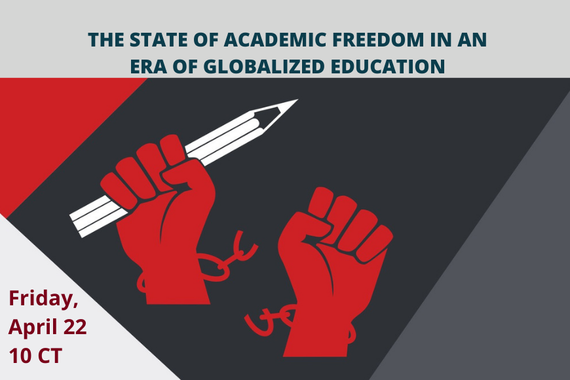