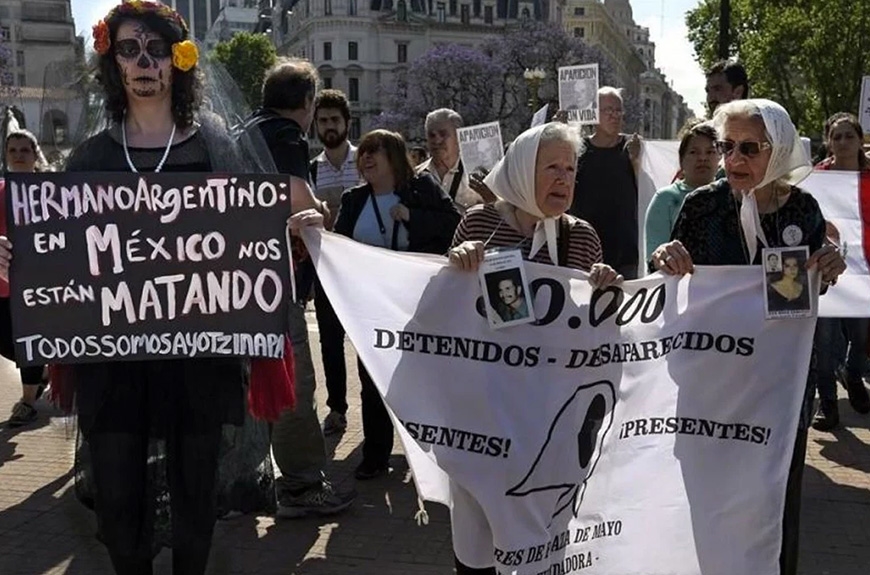 The Human Rights Program has a longstanding interest in promoting and protecting human rights in Mexico, growing out of the personal experiences and relationships of its leadership. The program’s director, Barbara Frey, has been involved in documenting human rights violations in Mexico for several decades, starting with her years as director of the Minnesota Advocates for Human Rights and continuing through collaborative relationships with human rights scholars and researchers at several Mexican institutions.

The program works on an array of human rights issues including prevention of torture in the criminal justice system, investigation of enforced disappearance, and the impacts of Mexico-Minnesota migration.

Observatory on Disappearances and Impunity

The Human Rights Program is a central partner in the Observatory on Disappearances and Impunity in Mexico, an academic-advocacy collaborative to systematically investigate, analyze, and combat patterns of impunity regarding enforced disappearances.

The aim of the Observatory is to decrease disappearances and impunity by increasing knowledge and public visibility about the patterns of disappearances.  By coding cases of disappearance from NGO files and local media stories, we are developing an objective and systematic database of the disappeared that seeks to demonstrate and explain the gaps in existing information, which is primarily controlled by the Mexican government.  The Observatory’s database will provide information from various sources regarding the "disappeared" in Mexico, specifically: who they are, where they disappeared, who carried out the crime, what efforts were made by families and pursued by officials, and the remedy outcomes of judicial and nonjudicial actions (i.e., justice and location of missing persons).

The contribution of the Human Rights Program to the Observatory has been the development of a database of cases of disappearance described in media sources. This database helps explain how the crime is experienced and represented to the public in states that have had high numbers of disappearance since 2009.  A team of bilingual student coders is reviewing articles from local newspapers regarding missing or disappeared persons from the states of Nuevo Leon, Coahuila, and Tamaulipas.

The Observatory is a collaboration between the Human Rights Program, Oxford University, and Facultad Latinoamericana de Ciencias Sociales, FLACSO-México. The Program receives support from the Ohanessian Dialogues on Mass Atrocities and their Aftermaths to fund student researchers, conferences, and travel on the Mexico Observatory.

The goals of the Observatory are to:

The Human Rights Program is an important destination for visiting international scholars with a focus on Mexico.  In 2015–16, the program served as the host for Professor Alejandro Anaya Muñoz, a well known and respected scholar in international relations and human rights, with a specific focus on Latin America.  Dr. Anaya’s research interests on topics such as the role and impacts of international enforcement regimes, democracy and human rights, migration, indigenous rights and social movements, matched the interests of University of Minnesota faculty and students because of our curriculum and research on related topics. During his visit, Professor Anaya taught a course, "Human Rights in Theory and Practice. An International Relations Perspective."

In 2012–13, the program hosted Visiting Professor Karina Ansolabehere, an esteemed political science professor from FLACSO-Mexico (Latin America Faculty of Social Sciences). During her stay in Minnesota, Professor Ansolabehere taught a popular undergraduate course offered in Spanish called "The Politics of Human Rights in Mexico."  Trained in sociology and political science, Ansolabehere specializes in the politics and culture of the judiciary in Mexico and Argentina. In addition to being a professor and researcher, Professor Ansolabehere was a key organizer of FLACSO-Mexico’s Master’s program in Human Rights and Democracy, and served as an advisor in the development of the Master of Human Rights degree at the University of Minnesota.

The Academic Network has convened three International Conferences in Chiapas, Puebla and Minnesota.  The Minnesota Conference took place in September 2016 featuring a Keynote by Jill Anderson, coordinator of "Los Otros Dreamers."  A bilingual, interdisciplinary group of scholars and activists presented on:

Papers from the conference are being reviewed for Volume 5 of Hispanic Issues Online, which was edited by Professors Ana Forcinito of the University of Minnesota and Melissa Pardo of UNAM.

The Human Rights Program presented a conference and book project in October 2015 to explore the human rights crisis taking place in Mexico in the second decade of the 21st century. The event, titled Human Rights in Mexico: Crisis and Opportunity Conference and Book Project, was co-hosted by Centro de Investigación y Docencia Económicas. The program assembled an impressive group of scholars, practitioners, and experts on the human rights situation in Mexico to discuss and reflect on the current human rights crisis in the country. The conference produced a series of academic papers which will have been compiled in a draft edited volume. The book is designed to assist scholars and policymakers to understand the difficult situation facing Mexico, and to identify possible routes to turn this crisis into an opportunity to advance the human rights agenda in the country.